Zuckerberg was unusually bold in continuing to hype the company's upcoming AR smart glasses. Right now, they're known as Project Aria, and only being worn internally by Facebook employees. Additionally, the company has promised to unveil its smart glasses design collaboration with Ray-Ban later this year. "I think virtual reality, the form factor constraints, I think, are a little less than what you're going to have in augmented reality, where in virtual reality, I think you need to get to a high-quality wireless experience. In augmented reality, you're going to really need a pair of glasses that look like normal looking glasses in order for that to hit a mainstream acceptance," said Zuckerberg. "And that, I think, is going to be one of the hardest technical challenges of the decade, it's basically fitting a supercomputer in the frame of glasses. I think that once that's achievable, the potential on that is going to be quite big." Aside from the success of Oculus gaming, part of the reason Facebook is so excited about AR as the future is its ability to place a virtual layer over the real world to enable commerce and advertising experiences and analytics. Zuckerberg spoke to that vision, in his own way, during the call. "Now, it's still primarily games. But, when we started on this journey, a lot of the reason why I said that I thought it made sense for us to invest in this is because I expect virtual and augmented reality to be some of the most social platforms that get built," said Zuckerberg. "And the fact that a number of the most engaging experiences on the platforms today are social and a lot of the top games are social, I think, is really promising. But also seeing things in terms of productivity, and like I mentioned, it's just really promising that you're seeing the early signs of this becoming a broader platform."

I've noted the lack of any Portal mentions, but what was also missing from Zuckerberg's sunscreen-laden lips was any mention of Spark AR, the company's augmented reality creation platform. Nevertheless, it's clear from his comments that Spark AR will be one of the tools employed on Facebook, Instagram, and Portal to give creators a path toward making a living from engaging and populating the social media giant's platforms. In augmented reality, you're going to really need a pair of glasses that look like normal looking glasses in order for that to hit a mainstream acceptance... once that's achievable, the potential on that is going to be quite big. "I think that a positive vision for the future of the economy is one where more people get to do creative work that they enjoy rather than jobs that they don't. And to get there, we need to build out the creative and monetization tools to support this creator economy," said Zuckerberg. "People create an incredibly diverse set of content across our services, from long form writing to live conversations to documentaries and augmented reality filters. And our goal is to support the full range of human expression, and to be the best platform for millions of creators to make a living." In the end, as fascinating as AR and VR may be, what Zuckerberg seems to be envisioning is a world of avatars, immersive hardware content gates, and production tools that will create a self-sustaining loop of creation and commerce that allows Facebook to mostly just sit back and simply make sure the system doesn't break.

"Over time, I expect augmented and virtual reality to unlock a massive amount of value, both in people's lives and the economy overall," said Zuckerberg. "There's still a long way to go here, and most of our investments to make this work are ahead of us. But I think that the feedback we're getting from our products is giving us more confidence that our prediction for the future here will happen and that we're focusing on the right areas."

Oh, and one more thing... what about cryptocurrency? Facebook's digital token, once called Libra, but now known as Diem, was another topic that wasn't fully addressed by Zuckerberg in his recent comments. When questioned on the topic of digital payments in this new creator ecosystem, Zuckerberg said, "Payments, both things like Facebook Pay and, eventually, Diem soon, I think is going to be a pretty big thing too... Commerce, across all these platforms is going to be very important. ln a platform that we're building like this, we want to enable payments very easily to make it to the economics all work out for developers." 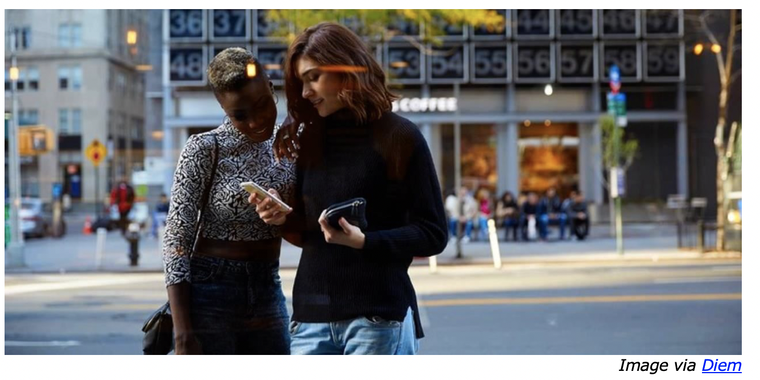 ​Although the current Bitcoin surge has captured most of the crypto attention, stable coins like Facebook's upcoming Diem will almost certainly be the key to unlocking a lot of the value in the virtual worlds of AR and VR on Facebook's platform. NFTs have now shown us that the public is ready for a non-Bitcoin crypto asset (Ethereum) as a unit of trade in virtual assets. But when Facebook puts its social media might behind its Diem coin, the potential for the virtual assets and commerce on Instagram and Facebook to be leveraged in new ways could be explosive. For now, Facebook is wisely moving quietly and speaking conservatively regarding its Diem plans, but if Spark AR is the augmented reality toolset, and Facebook and Instagram are the broad target AR platforms, then Diem could be the fuel, the oil, the digital lubricant that will kick Facebook's AR and VR vision into overdrive on the back of digital commerce. And that's all before we get Facebook smart glasses.