The Samsung Galaxy Z Fold3 will carry a similar array of cameras as its predecessor and an under-display camera for the foldable display - a 16MP Sony IMXx71 with 1μm pixels - allowing for a seamless big display experience. 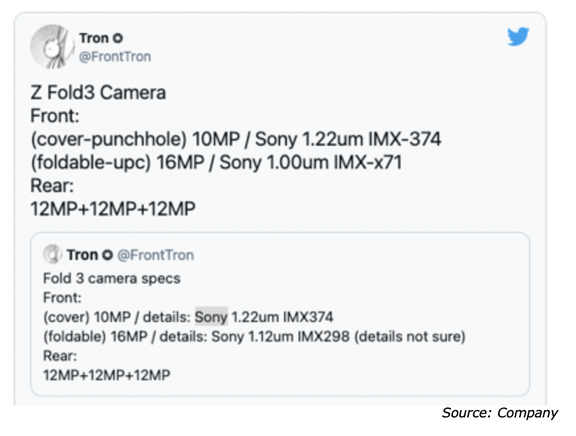 ​There will be another selfie camera on the cover display - a 10MP Sony IMX374 with 1.22μm pixels - inside a punch-hole cutout. The rest of the cameras are a trio of 12MP sensors - wide, ultrawide and a telephoto units, the latter likely a 3x non-periscope one. Galaxy Z Fold3 specs include S Pen  though no S Pen holster in the device's body, a Snapdragon 888 chipset, 4,400mAh battery with 25W charging and an IP rating for some degree of water and dust protection. The displays are rumored to be a 6.2-inch outer display and a 7.5-inch unfolding inner display - both 120Hz. The Samsung Galaxy Z Fold3 is expected to launch alongside the Z Flip3 in August. The two Galaxy Z handsets are supposed to feature UTG displays that will be stronger than last year, and the handsets will also be water- and dust-resistant. Samsung might have improved the build quality of other components and the overall design to prevent accidental damage. Samsung has also been working on foldable cases to go along with foldable phones. The Fold 3 and Flip 3 rumors did not reveal the pricing structure for these phones or their release dates. InfoStockDaily offers launch details for the clamshell model. The Galaxy Z Flip 3 will launch on August 3rd, according to the report introduced in early or mid-July, giving buyers two weeks to preorder the handset. More exciting is the Flip 3’s price, if the site’s information is genuine. The Foldable might start at $990, which is more than 30% cheaper than the $1,449 price of its predecessor. At nearly $1,000, the Flip 3 would match the iPhone 12 Pro’s price. The Flip 3 would still be expensive given that Samsung handsets don’t retain their value as iPhones do. The Flip 3 could be even more affordable in the months following the launch, which usually happens with Samsung Android flagships.