In Samsung’s quest to make OLED panels thinner, the company discovered a way to increase the luminance by 20% to 30%. The typical OLED panel configuration, includes:

To get the display to fold properly, Samsung has reduced the thickness by replacing glass with PI and then the cover lens with UTG and combining layers.  The circular polarizer serves an important function as it diverts incoming light away from the image but that comes at a cost of 100mm. The circular polarizer works well by distributing the ambient light, but it also blocks ~50% of the light generated by the OLEDs.

Samsung is working on replacing the partially reflective yellowish PDL with a black light absorbing PDL, eliminating the circular polarizer, and adding a color filter that is placed on top of the red, green and blue OLED sub-pixels. This type of color filter does not block 2/3rds of the light as would a standard color filter as it only effects the wavelengths for the desired color.

SDC’s roadmap includes eliminating the polarizer with an  On Cell Polarizer (OCP) or Color on Encapsulation (CoE). It improves foldability as the additional layers used to replace polarizers are thinner than the polarizer. The polarizer is replaced with a Black Pixel Defined Layer (PDL), a black matrix (BM and a color filter. The PDL is formed outside the deposition area before the sub-pixels are deposited and effectively minimizes the reflections caused by external light. Sumitomo has been the primary supplier of circular polarizers to Samsung. The use of an OCP should reduce the panel thickness by ~90mm, as the circular polarizer is ~100mm and the COE is <10 mm. 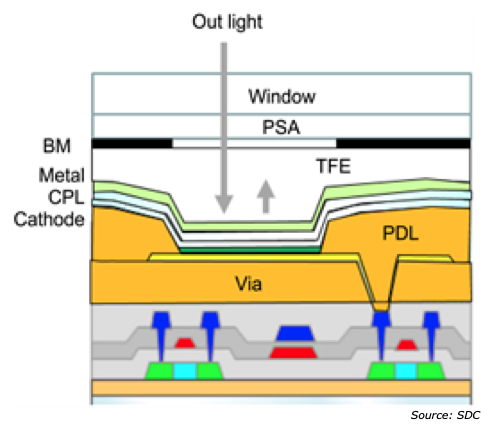 Since the yellowish brown polyimide layer of PDL reflects the ambient light, the visibility of the OLED display is reduced, especially in high ambient conditions and a circular polarizer is layered on top of the black matrix pattern layer as shown in the cross-sectional view of OLED panel in the next figure.

The 1/4λ polarizing film has a ~100mm thickness and also reduces the light output by up to 50%.  By patterning the PDL with a black photoresist, the black matrix pattern and 1/4λ polarizing film would not be required to constrain the ambient light, which reflects off the cathode. However, the photosensitivity of the positive-tone polyimide is not high enough to give black PDL patterns which have thickness of 1.0 - 1.2 µm. Samsung developed a negative-tone photoresist used for the photolithographic patterning of black PDL of OLED, since the polymerization depth of UV light is deeper than that of positive-tone photosensitive polyimide.[1] The result  is a negative-tone photoresist for the photolithographic patterning of PDL with black color since the penetration depth of UV light, which is deeper than that of positive-tone photoresist containing photosensitive polyimide. But the black PDL, cannot block all the ambient light and various anti-reflective films were tried, but none were acceptable requiring a color filter and black matrix to be patterned on top of the Y-OCTA layers, which adds an estimated five masks to pattern the BM, RGB color filter and OC layers, and requires additional lithographic tools Since the color filters are color on color as opposed the color on white, the light loss through the CF is small, <15%, comparable to quantum dots used to convert blue to red and green. Reportedly, the current prototypes have increased brightness by 20% to 30% and by also using LTPO, power consumption is reduced by more than 30%. This new approach, which has been called On Cell Polarizer (OCP) or Color on Encapsulation (CoE) should reduce the panel thickness by >90mm.

[1] The black negative photoresist include photoinitiator, photosensitizer, binder polymer developable with aqueous alkaline solution, multifunctional monomer for crosslinking reaction, black millbase and polyimide to increase the thermal stability of patterned black PDL of OLED devices. The last component of the black negative photoresist is critical, since the process temperature of black PDL reaches close to 300˚C including post-curing step after photopatterning, which is why photosensitive polyimide has been used in the normal (not black) pixel define layer patterning. Another requirement is the complete solubility of all the components of negative photoresist in the common organic solvent in this case propyleneglycol monomethylether acetate (PGMEA). If this condition is not met, the black PDL pattern has a saw-toothed deformation due to the aggregates made by incomplete solubility of the ingredients in the photoresist solution.
Other expected changes in the Z Fold 3, include:

The result is a foldable OLED panel that is 90 mm thinner, emits 20% to 30% more light with  a tighter folding radius, an UPC and a digitizer.  The downsides are 5 extra masks to pattern the color filter and the black PDL with the associated capex and potentially lower yields and ambient light blockage that is not quite as good as the circular polarizer. Due to the extra equipment for the masks, Samsung will reduce the capacity of the fab by10% to 15%. Samsung expects to optimize the process for foldables, which have lower volumes and higher margins and then potentially apply it to standard flexible OLEDs.