Vertical Divider
Z Fold 3 Due for Release in August

The Galaxy Z Fold 3, is reportedly in production with a release date sometime in August.  The Z Fold 3 is expected to have a 7.6” foldable OLED display, the same as in the Fold 2, and a 6.2” cover screen, also the same as the previous version.  The chipset is an updated Qualcomm Snapdragon 888, produced on a 5um node, vs. the Snapdragon 865 (7um+ node), and has a faster primary core, with an identical rear camera configuration. The selfie camera on the Z3 is the much anticipated under panel version that will make it invisible.

The Galaxy Z Flip 3, a compact foldable, is expected to begin production next week, but the release date is unknown.  Reports claim the price of the Flip 3 will be under $1,000, with a slight increase in screen size, the form factor is expected to remain the as the Z Flip 5G.  Samsung has aggressive sales goals for foldable this year, in the range of 5m units.  Ice universe said the upcoming foldable smartphone will shrink its bezels compared to its predecessor to a whole new level.  The images tweeted by the tipster show the Samsung Galaxy Z Flip 5G next to the unreleased Galaxy Z Flip 3. The bezels of the future clamshell styled phone will be much smaller. The shape and finish of the sides of the Z Flip 3’s has also evolved. They now look more modern and minimalistic.  All of these changes improvements when comparing the third generation to its predecessor, which looks a bit rough and definitely outdated. Note that these pictures are made by the tipster, based on the leaked information we have so far. On the downside, DSCC’s Ross Young tweeted the Z Fold 3 is thicker than the Z Fold 2 even with no polarizer and UTG thickness the same due to the digitizer for S Pen input.


Previous reports stated that the display of the Z Flip 3 will stay exactly the same, a 6.7-inch FHD+ foldable AMOLED display. The cover display, which shows information like the time and notification, will allegedly measure at 1.4-inches, an improvement over the 1.1-inch one found on the Galaxy Z Flip and Z Flip 5G.

Leaked images revealed that the device will have a two tone design, with a dual-camera system sitting next to its outer display. Eight color options are expected. The device is also reported to have the same weight as its previous generation. 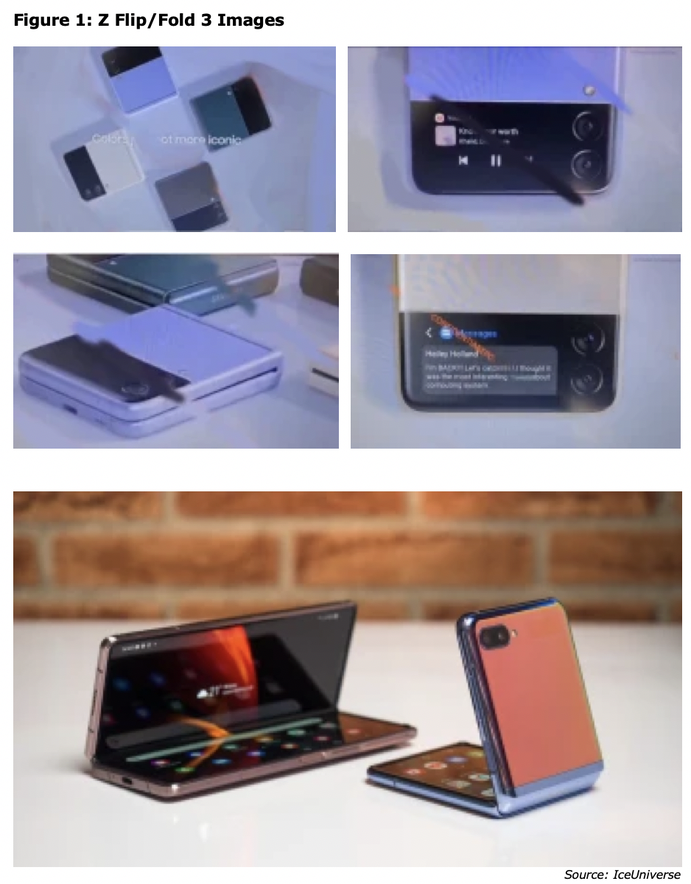 ​Samsung's Galaxy Z Flip 3 will probably see the biggest improvement spec-wise. An updated processor, cameras and more RAM and storage are expected. These will make the pocketable Samsung device on par with the 2021 competition. There were reports that the foldable will use Qualcomm’s new Snapdragon 870 processor, which is an improved version of the company’s older 865.