Samsung Electronics’ marketing organization continues to confuse consumers by using descriptors that don’t describe.  By saying that the Z Flip uses Ultra-Thin Glass (UTG), they caused the smartphone community to believe the display was either made of glass or protected as well as Gorilla Glass.  Neither was true!

From Samsung.com: “Meet the first-ever folding glass screen on a Galaxy. Yeah, we said folding glass. Made of Samsung Ultra-Thin Glass, it sets you up for an epic view with a smooth, flat screen.” Samsung Display said the UTG cover window is about 30um thick and is more durable and scratch-resistant than the plastic layers used on the Fold, adding that the product can withstand at least 200,000 folds.

The addition of glass to protect the OLED display electronics seemed like a win in the new Galaxy Z Flip, while plastics were used in addition to protect the glass from shattering, adding multiple layers of plastic-glass sandwich.

As a result, Samsung’s Galaxy Z Flip has been a hit with early tech media criticism:
Then Zack Nelson’s JerryRigEverything’s durability test uploaded to YouTube on showed problems.
Samsung responded saying its “first-of-its-kind UTG technology is different from other Galaxy flagship devices. While the display does bend, it should be handled with care,” 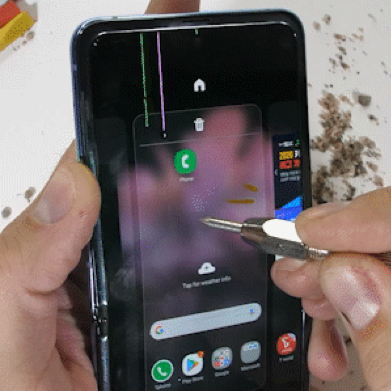 Source: JerryRigEverything’s Durability Test
​Those early adopters that have used the Z Flip and haven’t tortured it are very positive:

The biggest complaint was the utility (or lack thereof) of the 1.1-inch screen on the outside of the phone. Most of the time, it just shows you the time, date and battery percentage. Swipe right and three notification icons with a "+2" or however many more alerts are queued. Swipe left to get music controls. When a message comes in, a preview pops up and scrolls up to be read. For selfies or photos, the sliver of a screen is a very limited viewfinder. But this display isn't meant to do much more than serve up bits of information, and it doesn't take much effort to open the phone to really get to work.
There are plenty of reasons to prefer Samsung's foldable, including the dual-camera setup on the Flip's rear. The pair of 12-megapixel sensors offer a regular 78-degree field of view as well as a 123-degree wide-angle. The images themselves are pretty standard for a Samsung device -- they're colorful and crisp, but lack the dynamism that on Pixels or iPhones. Still, even garden-variety Samsung cameras are better than the solo sensor on the Razr's rear.

Korean outlet Aju News  reports that the Fold 2 might have an under-screen selfie camera, meaning no hole, a prototype we saw at CES 2020. It could also use UTG taking advantage of the increased capacity in Vietnam. The Samsung Galaxy Fold 2 is currently code-named Champ, and is scheduled for a Q3 2020 launch date. Aju News, meanwhile, says the phone will launch in July. The phone will fold out to offer a 7.7-inch display, meaning the screen is slightly larger than the 7.3-inch Galaxy Fold panel. Otherwise, the Korean news outlet says it’s tipped to have a similar price to the original model. Whether UTG has some flaws or not, it still outperforms CPI, so expected UTG to be used as a protective layer for foldable phones in the future.