The early positive results from Fold is spurring Samsung to release more foldable models in order to meet its target of selling 6 million foldable smartphones in 2020. Though there were rumors that the Samsung Galaxy Z Flip will be released as a mid-segment device with a Qualcomm 7 series processor at a price point below $900, subsequent reports have debunked this theory. The device is likely to have the Qualcomm Snapdragon 855 SoC processor and a price of $1300. Samsung will follow the same pattern of releasing foldable smartphones at premium devices with high-end specifications. The third foldable smartphone from Samsung is now expected to sport the Qualcomm Snapdragon 865 SoC with an 8-inch display with two hinges and a triple fold. In addition, the phone is predicted to have a108MP camera and an S-Pen. The rest of the specifications are not known. This foldable phone may be launched by Samsung in Q2 this year. 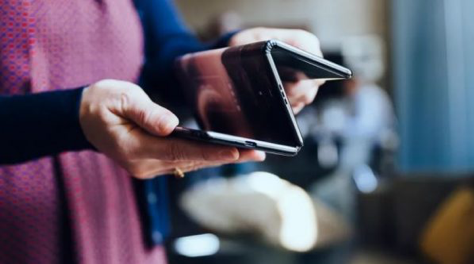 ​Source: Company
The plastic protection layers on today’s foldables are more vulnerable to damage from anything as banal as a stray fingernail or crumbs working underneath the screen to an accidental poolside splash or sidewalk drop. Motorola added a hard coating to the Razr's plastic display to make it stronger. But one rumor suggests that the Galaxy Z Flip to be announced on Feb. 11, will be the first to use  UTG as the protective layer. Last week we reported on Akhan Semiconductor that claims diamond glass will bring greater strength and flexibility to foldable phones. The Motorola Razr is the latest foldable phone on the market, and the first to offer a clamshell form factor akin to feature-phones of yore. The pre-order campaign kicked off this past weekend and Motorola has a few pointers for buyers before they get their hands on devices. An official video dubbed “Caring for Razr” (h/t: The Verge) says that “bumps and lumps are normal” on the Motorola Razr screen. It’s not uncommon to see a crease on the display area covering the hinge as the screen folds and unfolds. But bumps are another matter entirely, and a large number of bumps are not normal. These bumps were a sign of a defective Galaxy Fold, as internal components poked at the screen. Either way, this serves as another reminder that today’s foldable phones are still in their infancy, as bumps and lumps aren’t tolerated on a traditional smartphone display. The video also calls on users to close the Motorola Razr before stowing it in a pocket or bag. Furthermore, it warns users not to add a screen protector to the device. It’s not all bad news though, as the clip notes that the device is water repellent, saying owners need to wipe the phone with a dry cloth if it gets wet. Beyond the screen, foldable phones also need to be completely sealed so that dust and other debris won't gum up the works. This was a problem with the Galaxy Fold review units, which caused Samsung to delay the phone's sale by four months and completely redesign it.  Sealing the phone design also protects it from potential water damage. Exposed gears on the hinge mechanism also pose a problem. Most foldable phones show a crease after multiple foldings. The Razr has the least obvious hinge trough because it's only as wide as the phone, roughly 2.5 inches. By contrast, the Fold closes side to side, which makes its crease the same as the Fold's height, about 6 inches tall. Motorola says that the internal hinge design also helps deemphasize the crease, though it can still be seen and felt.

The Galaxy Z Flip is expected to sport an “ultra-thin glass” for the display that makes it sturdier than the plastic film found on the Galaxy fold. However, to account for the brittleness of the glass when subjected to force, Samsung is expected to use rubber bumpers. Spotted Twitter user Jonas Daehnert (known as PhoneDesigner), the renders reveal what looks like rubber bumpers on the bottom bezel of the device. These bumpers are reminiscent of the ones found in laptop screens that create a gap between the screen and the keyboard. However, on the Galaxy Z Flip, these bumpers likely help soften the force of the impact when the device is closed shut. It is not clear as to what other purposes do these components serve.

Microsoft’s software for the Neo/Duo could help with new ways to use apps on a bendable display.  TCL's prototype for a cheaper foldable phone  is the first design that's rigid enough to stay open at a 90-degree angle  and could be a forerunner to a genuine split-screen mode where it acts as a mini laptop with a keyboard or gamepad on the bottom part of the screen and an app or game on the top.  On the Galaxy Fold, Google has made Android work so that when the phone is opened, the app switches quickly from the outer to the inner screen, but nowhere near as comprehensive as what Microsoft promises.

Not all foldable phone designs have a second display, but those that do all take a different approach to how you use them. As a general rule, though, the smaller the secondary screen, the less capable. For example, any app can be opened on the Galaxy Fold's 4.6-inch outer display, but the dimensions are so squeezed that typing is frustrating. It's best for viewing notifications or scrolling through a social media stream. Typing isn't even an option on the Razr's external 2.7-inch display, which is strictly for viewing and for sending simple canned responses to messages.  Along with the screen and camera quality, battery life is consistently one of the top three features that phone buyers care about most. An expensive foldable phone that can't last a full day, or that loses significant capacity over the course of a year or two, won't win long-term fans. Phone-makers that can give their devices comparable battery life will have an advantage. Large-screen phones have become good at extracting all-day life from extra-large batteries, but foldable phones are a different animal. Most of the designs use two smaller batteries. Separate batteries are less efficient and one large battery will provides the most mileage per charge.

Even the smaller, simpler Motorola Razr will cost $1,500. But support for 5G data, a must for premium phones in 2020, will bump up the price even more. Paying a compounded premium for both foldable and 5G would be a hard pill for the average consumer to swallow. Once a driving force in the Android smartphone space, Motorola’s market share has steadily declined over the past couple of years in both the mid-range and premium smartphone segments. The Lenovo-owned company so far has failed to thwart the rise of Chinese smartphone makers such as Huawei and Xiaomi on a global scale. One thing that hasn’t changed over all these years, though, is Motorola’s creative flair, with the company always ready to explore unique designs and experiment with existing hardware to create new use cases. Last year, Motorola was one of the first OEMs to bring the 21:9 aspect ratio to the mid-range segment with its Moto One Vision smartphone. While on the Moto One Action and Moto G8 Plus we saw the company fitting the Go Pro-style action camera, allowing users to shoot landscape videos while comfortably holding the device vertically in one hand. Now as per a new leak, Motorola will continue to experiment with new concepts – at least for them – in 2020 as well. Well-known leaker Evan Blass (aka @evleaks) has shared a render of a new Motorola phone which shows that an upcoming device from the brand may come equipped with a stylus. Not much is known about his mysterious device yet including its name, specifications, or release date, but looking at the render, we can form some general idea as to what to expect from this upcoming phone. In the render below, the device features a hole-punch display with very narrow side bezels and a small bottom chin.

Figure 3: The Fall of Lenovo/Motorola vs. Smartphone Leaders 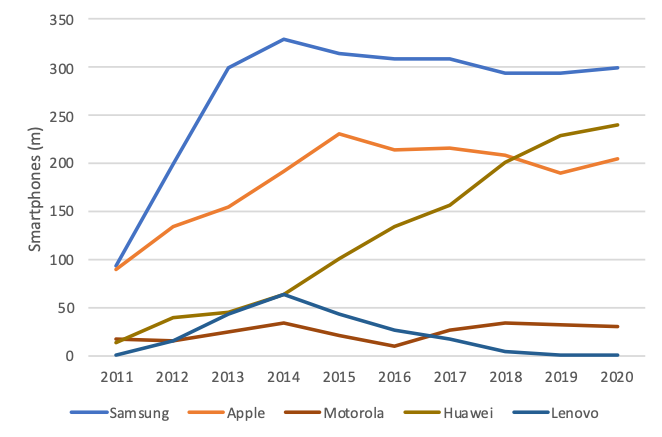 Huawei is expected to launch a revised version of the original Mate X folding phone during Mobile World Congress 2020. The Huawei Mate X2, isn’t the Mate X although it is likely to be similar on the outside, but with the new Kirin 990 processor inside, an improved hinge, and a tougher folding display. The Huawei Mate X2 has been rumored release sometime between July and September, making it possible the phone will arrive soon after the IFA 2020 technology trade show. The timing may mean the Mate X2’s announcement will come at the same time as a Mate 40 phone from Huawei.

Source: Digital Trends
​
​Unlike the Mate X, a patent filed by Huawei shows what could be the Mate X2 with a screen that folds inward, like the Samsung Galaxy Fold. However, the design will allow for a side bar down one edge, which makes the phone easier to hold with one hand. This bar has a display on one side, which could be used to show notifications. There doesn’t seem to be any other outer display.

The side bar also contains the camera lens array, which consists of four cutouts on the outside, and two on the inside. All six lenses would be usable with the device closed, but the lack of outer screen makes it uncertain how they would function. The other standout feature is a stylus, which slots into a hole at the bottom of the side bar. Adding a stylus could make the Mate X2 more versatile, but questions remain over how the stylus would feel to use against a non-glass folding screen. Another patent was discovered in September 2019, showing a Huawei folding phone with a stylus, and a similar inwardly folding design to the latest patent. All patents show the Mate X2 with rounded corners, like the Galaxy Fold, and unlike the squared-off corners of the Mate X. The Huawei Mate X2 may be one of the first phones to use a new Huawei Kirin processor, which traditionally arrives at the IFA technology show held in Berlin every September. This chip would succeed the current Kirin 990 processor. The device having a 5G connection seems almost certain.