Source: ITHome
​
The first device rocks what appears to be a near bezel-less triple-sided design, with the display wrapping around the front, back, and left-hand side. There isn’t a front-facing camera visible, though we can see a dual-camera array around back. We can’t tell if Xiaomi completely omitted a front-facing camera or if it is just hiding in one of the tiny bezels or under the screen. The second device also has both front and back displays, but instead of the display wrapping around the side, this device’s screen goes over the top. The patents don’t include a render showing off the top of this device, so we can’t be sure if it completely wraps around like the first device or not. It also features a rear-facing dual-camera setup with no visible selfie camera like the first render. Though the patents don’t say if either device is foldable or not, it’s worth mentioning that this could be the case. If it is, the former looks like it would be a horizontal folding device while the latter would sport a vertical folding design 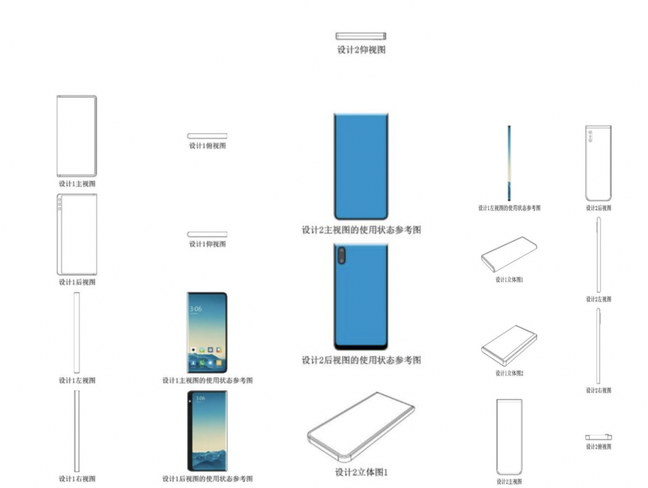 Source: ITHome
​
​At the closed-door press briefing where Xiaomi explained its upcoming strategy of bringing Mi-branded flagships to India, the company also showcased the Mi MIX Alpha, the concept 5G smartphone with a wraparound OLED display. As with previous MIX smartphones, the MIX Alpha is Xiaomi’s take on the flexible OLED form-factor. The MIX Alpha doesn’t bend or fold. Instead, a single flexible OLED just wraps around the titanium body, covering the front, back and the sides. It looks stunning, and quite unique compared to other phones. This even beats the NEX 3’s Waterfall Display and the NEX Dual Display’s second panel at the back.  The screen-to-body ratio is a staggering 180.6%. Xiaomi calls this the 4D Surround Display.
Having the display take up all the space means the R&D folks at Xiaomi had to find an alternative to the traditional ear-piece and the proximity sensor. So, Xiaomi adopted a refined version of the piezoelectric speaker from the original Mi MIX and installed an ultrasonic proximity sensor that uses ultrasonic soundwaves to detect whether the phone in a pocket or sticking the face. The edges of the panel house virtual volume rockers on side and notifications and status icons on the other. The volume buttons are pressure sensitive and simply sliding the finger along that area will increase or decrease the volume. There are also additional sensors and Xiaomi’s own AI algorithms that work to detect which part of the display you’re using and prevent accidental touches. As for the rear panel, Xiaomi explained three use-cases. One is to use the rear panel to click a selfie. The MIX Alpha doesn’t have (or doesn’t need) a front camera. Instead, it uses the rear camera stack (more on that later) to take selfies. In that case, the rear display lights up to show your portrait and you can click what is probably the most detailed selfies ever with the 108MP camera. Another use case is to keep track of an Uber till it reaches your location, or you can use the second screen to control your smart home devices.

Xiaomi used the best possible hardware for the camera. The MIX Alpha sports a five-lens camera stack led by Samsung’s 108MP camera sensor that measures 1/1.33” in size, around 300% larger than the 48MP cameras that flooded the market in 2019. The 108MP camera has an aperture of f/1.69 and offers OIS. There’s a 20MP ultrawide camera that also does macro up to 1.5cm, and a 12MP telephoto lens with 2X optical zoom support. The camera sensors are protected by sapphire glass casings while the modules themselves are mounted on a ceramic column that is the only interruption in the wraparound display. Inside the titanium body of the Mi MIX Alpha, there’s the Snapdragon 855+ along with the Snapdragon X50 5G modem, making it capable of supporting 5G connectivity. There’s 12GB of RAM and 512GB UFS 3.0 storage as well, making the MIX Alpha just as powerful as the premium flagships of 2019