Xiaomi, which is the leading supplier of mid and low range phones in India shifts focus to its premium products that are usually marketed under Mi branding in China. Following a packed 2019, when where a total of four smartphones make up the Mi 9 line, Xiaomi has refreshed its flagship series for 2020 with a pair of devices. The company made the Mi 10 and Mi 10 Pro official in China following several rounds of teasing and leaks.
There aren’t a ton of points on which the two phones differ. Both the Mi 10 and 10 Pro are powered by Qualcomm’s latest Snapdragon 865 chip and get up to 12GB of RAM. Up front you’ll find a curved 6.67-inch AMOLED screen with an FHD+ resolution and support for 90Hz refresh rates. The display has a built-in fingerprint scanner and a hole-punch front-facing camera. Both models have a pair of stereo speakers and are 5G-enabled out of the box, but you cannot expect these Chinese units to work with US bands without a hiccup. While they share the primary 108MP camera sensor as part of a quad-cam setup, the Mi 10 Pro takes the lead with better optics.
The Pro variant differentiates itself with an 8MP telephoto lens allowing up to 10x hybrid zoom alongside a 12MP portrait lens. These cameras have already undergone DXOMARK’s scrutiny, where the Pro topped the current leaderboard with 124 points. Surprisingly, the phone houses a smaller 4,500mAh battery against the standard Mi 10’s 4,780mAh, though it can charge with a faster 50W adapter (versus the non-Pro's 30W). The Mi 10 Pro’s display also gets a tad brighter at 1,200 nits of peak brightness (among other improvements), over the Mi 10’s 1,120 nits. Finally, the higher-end handset offers more storage across its variants starting at 256GB. 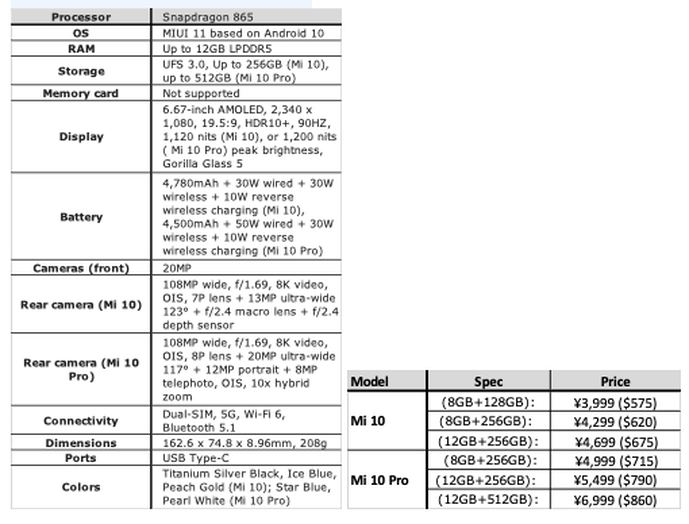