Earlier this month, a foldable Xiaomi smartphone was spotted running the MIUI 12. Since then, there are rumors that the company will be launching a new foldable device later this year. Now, a new report has suggested that other Chinese OEMs are also on schedule with their own foldable handsets that will launch this year as well.

Xiaomi, Oppo, and Vivo are gearing up to launch new foldable smartphones later this year. A tipster revealed the information through a post on Weibo, which states that the three Chinese OEMs will officially launch their new foldable handsets in 2021. The Xiaomi smartphone with a bendable screen was spotted inside a subway in China and seemed similar to Xiaomi’s VP showcased a few years back but this one has a bigger display. This device is likely a prototype and uses a hinge mechanism similar to the  Galaxy Z Fold. The device is also shown as running MIUI 12 OS. The OPPO foldable smartphone sport a similar hinge mechanism as the Xiaomi prototype. 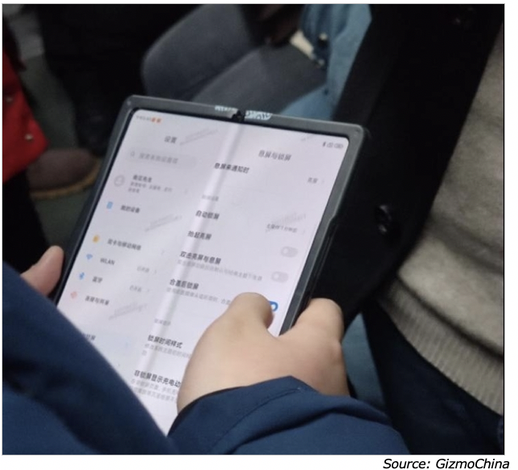 ​Xiaomi is reportedly planning to use the Snapdragon 870-powered model on the Mi 10 series and a new mid-ranger with an unannounced Snapdragon 700 series chipset. The post to Weibo suggests the phone will sport an OLED display, a 64MP primary camera, and 5x zoom. The leaker also mentions the Snapdragon SM7350 — a model number yet to be used by Qualcomm on any current hardware. However, it’s understandable that if the Snapdragon 765 wore the SM7250 tag, this chipset is the next model in the line.

Xiaomi is expected to use the chip in a Mi 11 series model; as a mid-range device, it would likely be the Mi 11 Lite. Previous leaks suggest that the phone will launch with a Snapdragon SM7150 chipset — namely silicon from the Snapdragon 730 family. The mystery phone may also belong to the Redmi K40 line, as the K30 also employed a 700-series chipset and a 64MP primary shooter. Xiaomi would have to replace the 120Hz LCD for an OLED panel. Redmi general manager Lu Weibing also confirmed that a K40 model will employ the Snapdragon 888 chipset. Xiaomi is set to announce the Mi 11 series globally on February 8. The Redmi K40 series should also make its bow this month.

Xiaomi’s sub-brand Redmi is expected to announce the Redmi K40 series of smartphones later this month in China. The lineup is likely to include an upper mid-range phone called the Redmi K40 and a flagship model named Redmi K40 Pro.
Last month, a clue to a mysterious Xiaomi phone powered by the upcoming sm7350 chipset by Qualcomm was found in Xiaomi Mi 11’s MIUI source code. The final product name of the device is not known. However, it is believed that this chipset could be debuting in the market with Snapdragon 775G moniker in Q1 2021.  The Snapdragon 775G is expected to be a 5nm chipset with Cortex-A78 architecture and could score around 530,000 on AnTuTu benchmarks. The chipset is said to carry support for up to 12 GB of LPDDR5 RAM, UFS 3.1 storage, and a 120Hz refresh rate display. The leak reveals that the upcoming Xiaomi/Redmi phone has an OLED panel with a single punch-hole design, is equipped with a 64-megapixel primary camera and it is likely to carry support for 5x zoom and includes fast charging capabilities.