Huawei’s slide in smartphone shipments  allowed Xiaomi to pass Apple for third place in Q3 2020, and it’s closing in on Huawei in 2021 if not Q420. Nikkei Asian Review reports Xiaomi has been talking to suppliers to order parts for up to 240 million smartphones, citing sources close to the matter. This number not only exceeds Xiaomi’s annual shipments to date but would be roughly equivalent to Huawei’s record high of 240.6 million smartphone shipped in 2019. Xiaomi allegedly told some suppliers that its internal goal was to ship as many as 300 million smartphones in 2021. By comparison, Samsung shipped 298 million units in 2019, according to Counterpoint. A source told the Nikkei Asian Review that the goal of 300 million units shipped isn’t likely to be achieved though, as chipset suppliers Qualcomm and MediaTek cannot deliver the required volume of SOCs. “Xiaomi is setting a much more aggressive goal for suppliers as it hopes to expand the market before other rivals catch up — and it also hopes to book and secure more parts to avoid any disruption from the current supply chain bottleneck and component shortage,” the source was quoted as saying. 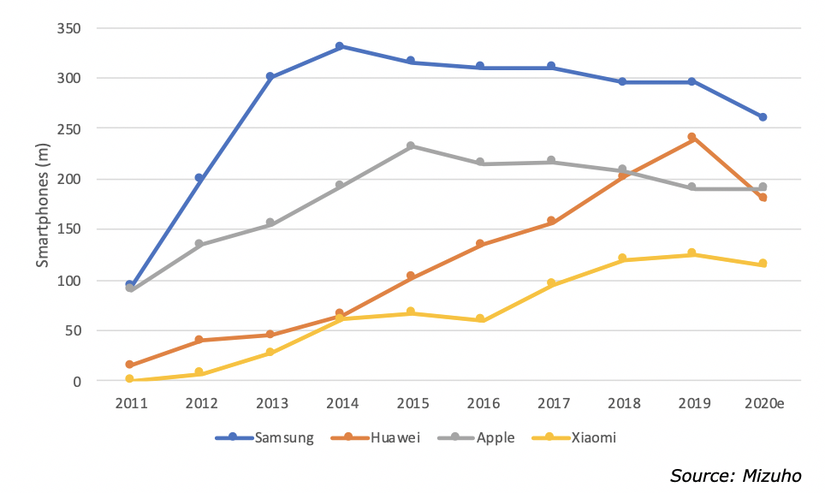 Samsung is expected to supply budget Exynos chips to Xiaomi, OPPO and vivo next year. Hitting the more conservative goal of 240 million units shipped in 2021 could potentially mean that Xiaomi puts some distance between itself and Apple. But it could also result in Xiaomi firmly occupying second place as Huawei will be limited by US sanctions next year in addition to the sale of its Honor sub-brand TSMC may be the clear leader in the pure-play foundry sector, but Samsung is keen on catching up in advanced manufacturing processes. Qualcomm's freshly unveiled Snapdragon 888 will be made using 5nm process at Samsung, which reportedly has offered major discounts in manufacturing quotes to secure the US chip vendor's orders. While Samsung is handling the foundry work for Snapdragon 888, ASE Technology is responsible for its packaging. Qualcomm is upbeat about the 5G smartphone market in 2021, and its optimism has been echoed by Micron, who has seen strength in mobile, auto, industrial and PC sales. Now DRAM spot prices are expected to rise soon on rebounding end-market demand.
​
Samsung cuts foundry quotes for 5nm chip orders from Qualcomm: Samsung Electronics has cut its foundry quotes to attract 5nm chip orders including those for Qualcomm's new Snapdragon 888 processor series, according to industry sources.