LGD has continued to push transparent displays and have increased transparency to over 40%. Previously, the app being exploited was indoor retail signage.  Now, Xiaomi always looking for an edge released the first commercially available transparent TV, the Mi TV LUX Transparent Edition. The TV has a 55” display (that incorporates RGBW OLED technology using a transparent anode and cathode in the OLED stack, allowing light to be generated from the front and back of the display. The set is a bit expensive at $7,200 and has limited availability, but has beat out other contenders Skyworth and Panasonic, both of whom have indicated a transparent TV release and shown demos.  LG Electronics transparent panels are used in signage applications, The TV uses the Mediatek  9650 TV processor and has all the bells and whistles expected in a $7k+ TV 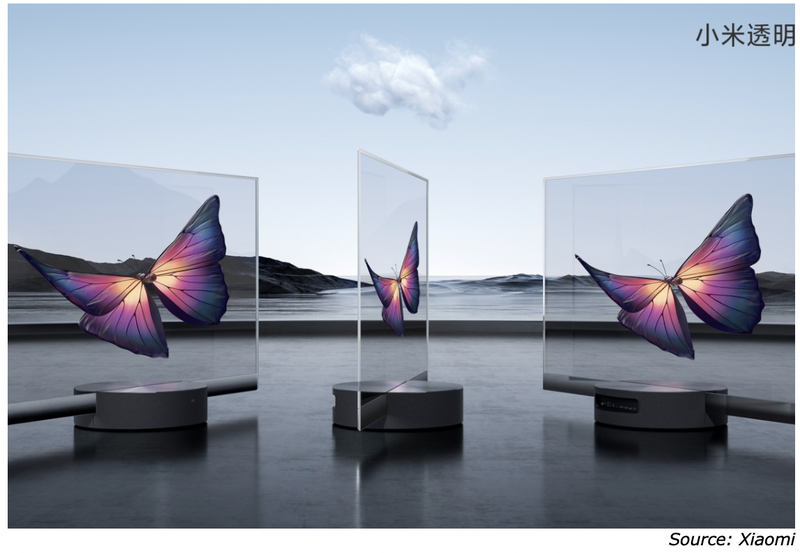 ​The 55-inch transparent TV “looks like a mere glass display” when it’s off. Powered on, it has a 120Hz refresh rate, 1ms response time, 150,000:1 contrast ratio, and it has 93 percent of the DCI-P3 color profile. Xiaomi talks up its AI Master Smart Engine and the custom-made MediaTek 9650 chip for being able to intelligently optimize how the picture appears, but it doesn’t mention how it’s able to isolate objects from a background like the images show — if that’s even something it can do. The frame has a dark hue to it and Xiaomi’s press images reflect that the panel might be slightly darker, so this could be true to how it looks in person.