Vertical Divider
Xiaomi Compares the Performance of OLEDs vs. LCDs

Recently, we reported on a Xiaomi’s executives feeble justification for relying on LCDs rather than a wholesale switch to OLEDs. Last week, Xdadevelopers, performed a head to head display comparison of the company’s LCD flagship series (Mi10T) and the OLED flagship series (Mi 9T), which we essentially reproduce below. They point to some performance improvements of the LCD over the OLED namely, the effect of higher refresh rates and better color uniformity.  We must point out that the OLED shortcomings are likely an indictment of the Chinese OLED vendor used by Xiaomi (probably BOE), since Samsung’s OLED displays have been judged by DisplayMate to have almost perfect color rendition and uniformity.

The Xiaomi Mi 10T and the Mi 10T Pro are Xiaomi’s latest flagship-killer grade smartphones. By nomenclature, they succeed in the Mi 9T and the Mi 9T Pro, respectively. The Mi 10T duo gets a range of updates over the Mi 9T — rebranded Redmi K20 series — including the newer, more advanced, and 5G-enabled Qualcomm Snapdragon 865 mobile platform, a 20% larger battery, improved haptics, cameras with up to 108MP resolution, etc. The first and the most glaring feature on the Mi 10T or the Mi 10T Pro is the new, larger, and smoother hole-punch display used on these devices. For Mi 10T and the Mi 10T, Xiaomi has chosen a 144Hz LCD that supports dynamic refresh rate switching. Their choice seemingly defies the common belief that AMOLED displays are better than LCDs, especially for flagships and flagship killers. Xiaomi challenges the notions about AMOLEDs’ qualitative superiority with claims about having tuned the color profiles of the display incisively. To justify these claims, they sling catchphrases such as DCI-P3, AdaptiveSync, which will be addressed as to their relevance.

Source: xdadevelopers
As per Xiaomi’s official listing, the Mi 10T series devices have a typical brightness of 450nits, which can peak to up to 600 nits with the sunlight mode. The Mi 9T’s AMOLED display is officially claimed to have a typical brightness of 430nits, peaking to 650nits under strong sunlight. Although both displays are fairly bright and legible — even under a strong light source, the Mi 9T Pro’s AMOLED display feels much brighter than the Mi 10T Pro’s LCD. A Lux Light Meter Free app was used on the Samsung Galaxy Note 20 Ultra and noted the brightness values (in lux) by holding the Note 20 Ultra’s ambient sensor against the display of both the smartphones. For more accuracy, I took three readings per device and then estimated the mean value. Besides, I also took the readings from a distance of ~5cm from the smartphones in a pitch dark room for an affirmative conclusion. 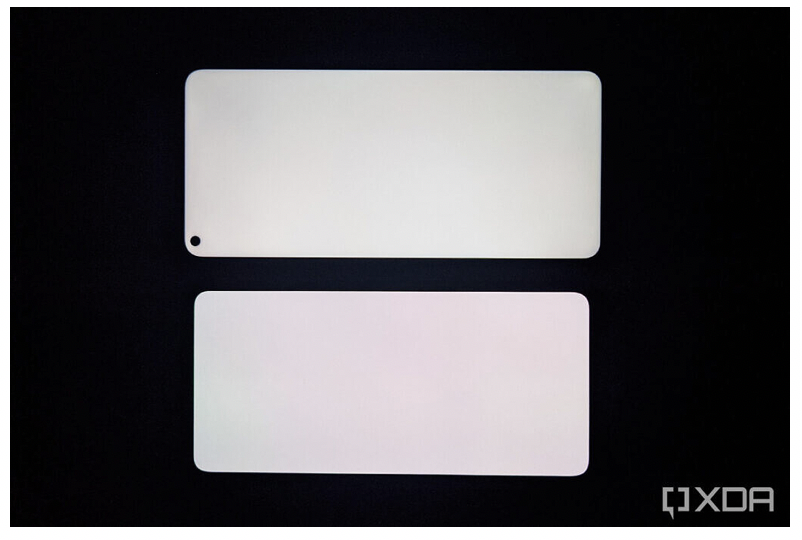 ​Source: xdadevelopers
The Mi 9T Pro’s AMOLED display appears brighter than the LCD on the Mi 10T Pro. But at the same time, the LCD has a more uniform color throughout the display. The LCD’s white color also has a closer-to-neutral color temperature than the AMOLED display. For all of the following tests, the “Auto” Color Scheme has been selected on the smartphones’ Display Settings. This is the default option that both of these devices ship with. While the option to change is available,  the white balance on both devices and even tweak values of RGB, Hue, Saturation, Contrast, and Gamma on the Mi 10T, most of the users are unlikely to fiddle with those settings.
Contrast on Xiaomi Mi 10T Pro vs Mi 9T Pro. On paper, the Mi 10T and the Mi 10T Pro have a contrast ratio of 1500:1, whereas the Mi 9T series has a much higher contrast ratio of 60000:1.
Figure 2: Deeper Blacks On The Mi 9T Pro (Right) Vs Grayish-Black On The Mi 10T Pro (Left) 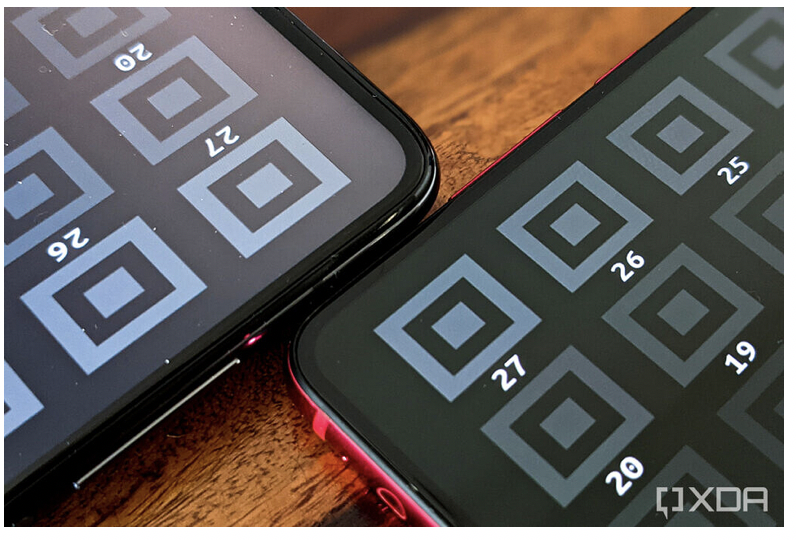 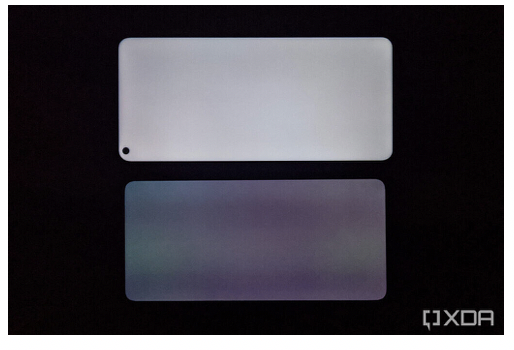 Despite this variance in the quantitative values, both smartphones do not show any significant difference in terms of the quality of any content. In fact, the Contrast test from the Display Tester app reveals that the Mi 10T offers a much better distinction between different colors at low brightness. 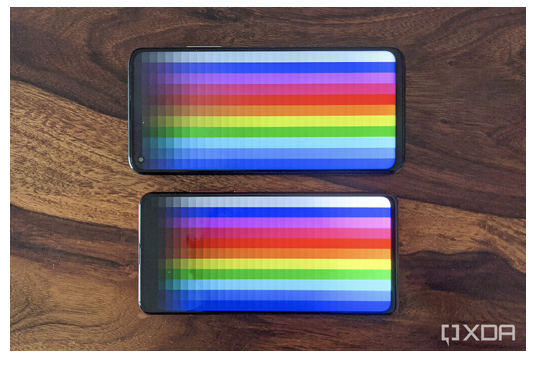 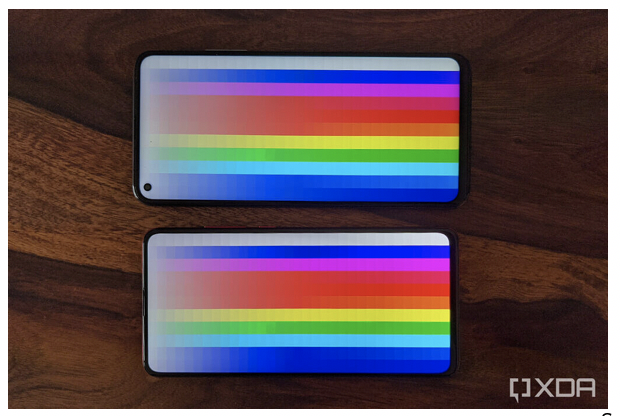 Source: xdadevelopers
The Mi 10T series takes a significant lead against the Mi 9T in terms of refresh rate. The Mi 10T/10T Pro gets a 144Hz display, which means it refreshes every ~7ms, which is more than twice as fast as the ~16.7ms taken by the standard 60Hz display on the Mi 9T duo. As a result of more frequent refreshing, animations and transitions on the Mi 10T Pro’s display appear much smoother and fluid than the Mi 9T, which leads to a more enjoyable experience while gaming on the smartphones. A 144Hz refresh rate implies that the display can process and present videos or game-related content at 144 frames per second (fps) without lagging. Here are all the Android games that support gameplay at 120fps or higher.
While the 144Hz refresh rate is in itself a major advantage, especially for gaming enthusiasts, the Mi 10T devices also support AdaptiveSync. The Mi 10T’s screen supports variable refresh rates and can adjust it based on the content that is being displayed. The refresh rate values supported by the display include 30Hz, 48Hz, 50Hz, 60Hz, 90Hz, 120Hz, and 144Hz. By synchronizing refresh rate with the frame rate of the content (or in multiples), the Mi 10T Pro eliminates any instances of screen tearing or visual artifacts. 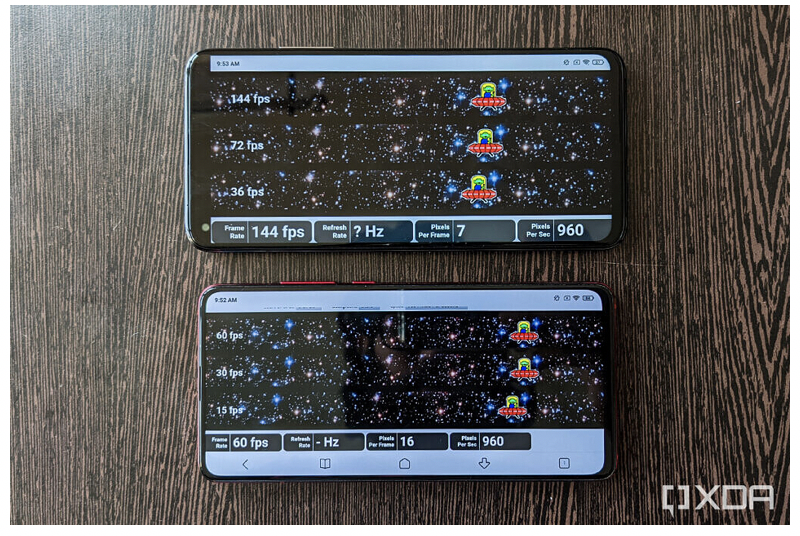 Source: xdadevelopers
​
​
Conclusion: Accuracy and Smoothness trumps Saturation and Contrast
The Mi 10T Pro is a competent smartphone, and the 144Hz AdaptiveSynch LCD makes it an excellent choice, especially for gaming — if you can wrap your head around Xiaomi’s confusing naming scheme. As opposed to OnePlus’ upgrades, Xiaomi’s T upgrades usually fare below the original numeric series i.e. Mi 9 was a better phone than Mi 9T/9T Pro, and the same applies when you compare the Mi 10 and the Mi 10 Pro with the Mi 10T and the Mi 10T Pro respectively. On top of that, while Redmi K20 and Mi 9T series are identical, Redmi K30 and Mi 10T are different devices — the non-Pro and the Pro variants in the former have been rebranded as POCO devices for markets outside China. Simultaneously, the Mi 10T has also come to be known as Redmi K30S in China as part of Xiaomi’s efforts to branch marketing and sales into the Xiaomi, Redmi, and POCO brands.