DSCC reports that X Display Company (XDC) spun out of X-Celeprint in 2019 to continue the commercialization of Micro Transfer Printing for display manufacturing. This technology has been developed over the last 15 years, which makes XDC one of the first companies to offer a mass transfer technique specifically for MicroLED displays. According to XDC, the technology is particularly well-suited for micron-scale chips, and they have achieved the highest transfer yields with devices smaller than 100 microns.
The new tool is installed in the US as part of a pilot production effort involving a multi-national supply chain. The tool was originally planned to be in Asia, but the pandemic created some logistical challenges and was ultimately installed in the US.

The tool precisely moves an elastomer stamp to retrieve and transfer arrays of MicroLEDs. The elastomer stamps have surface topography, protrusions (posts) designed to selectively transfer devices. The stamps are made on a rigid glass plate, so the stamps look and feel like a photomask. The stamps are transparent, and the tool has machine-optics that look through the stamp to align to the MicroLEDs. The throughput of the process is a function of the number of MicroLEDs transferred by each cycle of stamping and by how quickly the tool completes the full stamping cycle. The stamps can be large and still achieve good contact with large arrays of MicroLEDs because the stamp is compliant. They claim to have stamps as large as 100mm. Consider a wafer with 10 × 10 µm2 MicroLEDs made on a 15 µm pitch to be assemble onto a non-native destination substrate at 60 µm pitch (423 PPI). The pitch of the posts on the stamp will match the destination density, in this case 423 PPI, and a 60 × 60 mm2 stamp area would transfer one million MicroLEDs each cycle. If the tool performs four stamping cycles per minute, that equates to 240 million units per hour. Currently they run at two cycles per minute. They have demonstrated prototype displays using lateral “pads up” MicroLEDs and also flip-chip “pads down” MicroLEDs. Beyond MicroLEDs, our transfer process works with micro ICs, lasers, etc.

In 2015 the company claims it showed four nines (99.99%) transfer yield in a research lab. Since then, their partners have demonstrated four and five nines, and are confident that the technology will exceed six nines in mass production. Spanning all fields, including non-display, ten companies have licensed the technology, and it is being evaluated by several more. 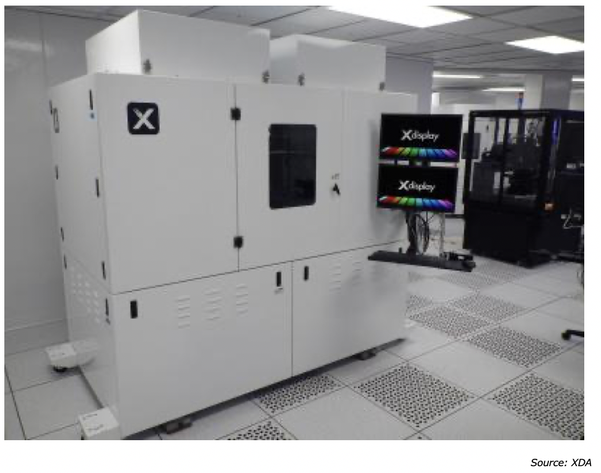 Given XRC’s forecast of  240m MicroLED dies/hour, the calculation of the number of tools required for 2K, 4K and 8K resolution panels is shown in the following table.

XRC did not provide their expected price per tool, but while the transport function seems possible for TVs (3rd row) but looks improbable for smartphones (1st and 2nd rows).  The performance of other transport technologies is shown below.