Vertical Divider
With an Installed Base of >5b Smartphones and Sales of 1.5b/Year, What Does the Future Hold for Smartphones?

Phones have pretty much ceased to evolve, and they were Steve Job’s commercialization of the smartphone. Smartphones aren’t phones. They’re pocket-sized, battery powered personal computers with wireless network peripherals. The last vestiges of “phone” technology is perhaps the circuit-switched voice connection, which ended with 3G cellular radio, a technology that’s end-of-lifed by most network providers, with sunsetting maybe starting soon (Verizon was going to pull the “plug” by January of 2020, but they gave it an extra year). The pocket personal computers have obsoleted, or at least eaten into much of the market for not just POTS/landline phones, but pagers, SatNavs, most classes of consumer cameras and camcorders, PDAs, media players, payphones, scanners, photo albums, books, magazines, address books, rolodexes, mobile TVs, voice recorders, notepads, business cards, flashlights, calculators, alarm clocks, barcode scanners, watches, calendars, newspapers, webcams, credit cards, day planners, radios, compasses, Gameboys, walkie-talkies, timers, sketchpads, guitar tuners, airline tickets, paper menus, and even, to an extent, big computers. What’s the future evolution of pocket computers?  Pocket computers started a bit before smartphones, but once you got smartphones, personal computing changed from a place you went to a thing you have (persona; computer), without giving up the connectivity. And this is why the installed base is >5b and 1.5 billion smartphones sold each year. Every year, some company or another tries out a new peripheral or two. Apple put a scanning LIDAR device in the iPhone 12 Pro… Samsung, Huawei, Motorola and Royole folding phones. Those that are well received get accepted by the public catch on, the others, not so much. But smartphones, like PCs before them, are mature enough that the technology evolves rather than reinvents. Some believe that the next jump is whether there’s  going to be a fundamental change in the nature of the technology. Smartwatches afford a bit of additional convenience over the pocket computers; answer phone calls without the “where did I leave my phone” question; 2-way authentication codes can be.

The other end of the spectrum is the Microsoft HoloLens, a $3,500 PC for the head that offers full augmented reality by way of scanning lasers creating a visual overlay. And yet, even the HoloLens isn’t perfect… the eye box (the area of overlapping image) is about 52 degrees in HoloLens 2… and the viewer can fall off the edge of AR pretty easily. It’s a full-fledged, smartphone-like computer, containing a Snapdragon 850, typical phone RAM and Flash, etc. But it’s bulky and weights over 0.5kg. The device augments a person’s vision, information can be presented directly, in-context. Virtual artifacts can be created, located, and seen within the real world. The resolution needs to be increased even at the HoloLens 2’s 2K per eye. Once displays provide 4–8K, distinction between real and virtual objects will evaporate, especially if it covers the visual field. But as we have written in the past the user interface needs to change, as you can’t talk exclusively to the device, while the wearer is in conversation with another person. Rather than calling up apps from a menu, the most-used apps will present at virtual objects in our environment. Move from the living room to the kitchen, office, car, etc. and will have different virtual objects, representing the ask-for apps useful in those situations. But more automatic apps are needed, things that engage based on what we’re doing. And there is widespread need for mapping that enables the viewer to place objects in reference to themselves. Give such a device five years of mainstream use and the idea of picking up a screen will look as quaint as a person typing into a big desktop computer does today. The main problem turns out to be how far miniaturization of the computer, display, radio, and battery can go and what is the comfort level needed to wear it 8–12 hours a day and how will it be powered? The devices will be worn while driving, watching TV, talking to friends. The greater the actual value, the greater the impact on society and the number of new problems likely to be encountered. The device is on the right side of the miniaturization challenge as 5nm processes drop to 3nm or 1 nm and micro displays can deliver 1m nits and 10K resolution in a 1-inch form factor. Eye glass and contact lens are worn in comfort for 12-18 hours a day, and the issue is now integration of miniaturization and comfort.

When a product reaches saturation, replacement time starts to dictate the sales cycle. TV replacement times average 10 years, except when there is a major technology change, black and white to color, boxes to flat panels. Smartphones have entered the saturation cycle and the industry, which has now shifted to a three-segment market (cheap phones (<$200), mid-range ($200-$600) and high-end (>$600) is undergoing a transformation regarding replacement times, which is a negative for shipment growth, an increase in the average price at the high-end driving owners to keep their phones for longer time periods. In 2012, the average replacement time for mobile phones was 23.9 months but varied considerably between age groups.  Owners in the 20-30-year-old group replaced their phones every 20.3 months, while those in the 50 and over group replaced their phones every 28.1 months.  According to data collected by Consumer Insights, the ‘holding period’ for mobile phones has increased in every age group and the difference between the age groups has also narrowed.  In 2012 the spread between the holding periods for the oldest and youngest groups was 7.8 months, while today it is only 3.8 months, with the youngest group extending their holding period  by 5.6 months over the last 9 years, while the over 50 crowd increased theirs by 1.7 months.  Over the same period, the average of all age groups increased by 4 months. 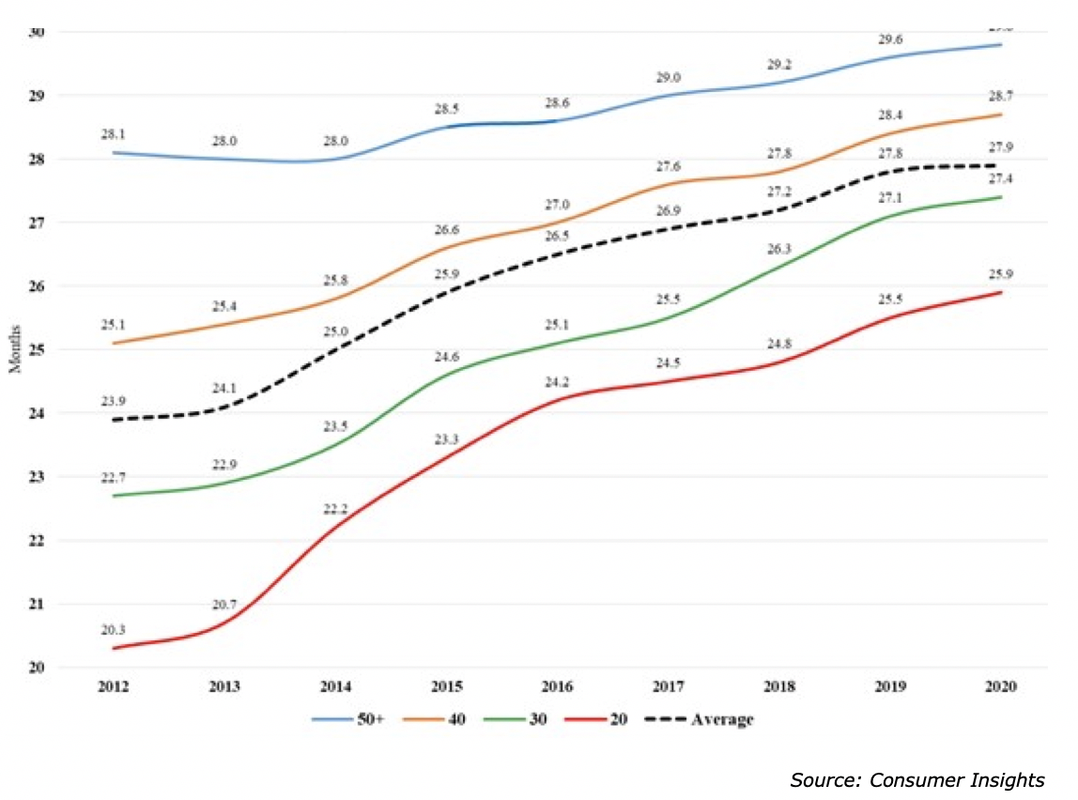 ​In China, referring to the yearly rate of change in each age category, based on the data in the prior chart, the holding time was extremely high in the 2013 – 2015 timeframe, reaching as high as 7% for the youngest age group in 2014, but despite a bump in 2019, the days of large movements in mobile phone holding periods in all age groups is heading down again.  While this means relatively little Y/Y change in the phone holding period in 2021, it reflects shorter replacement times due to 5G. 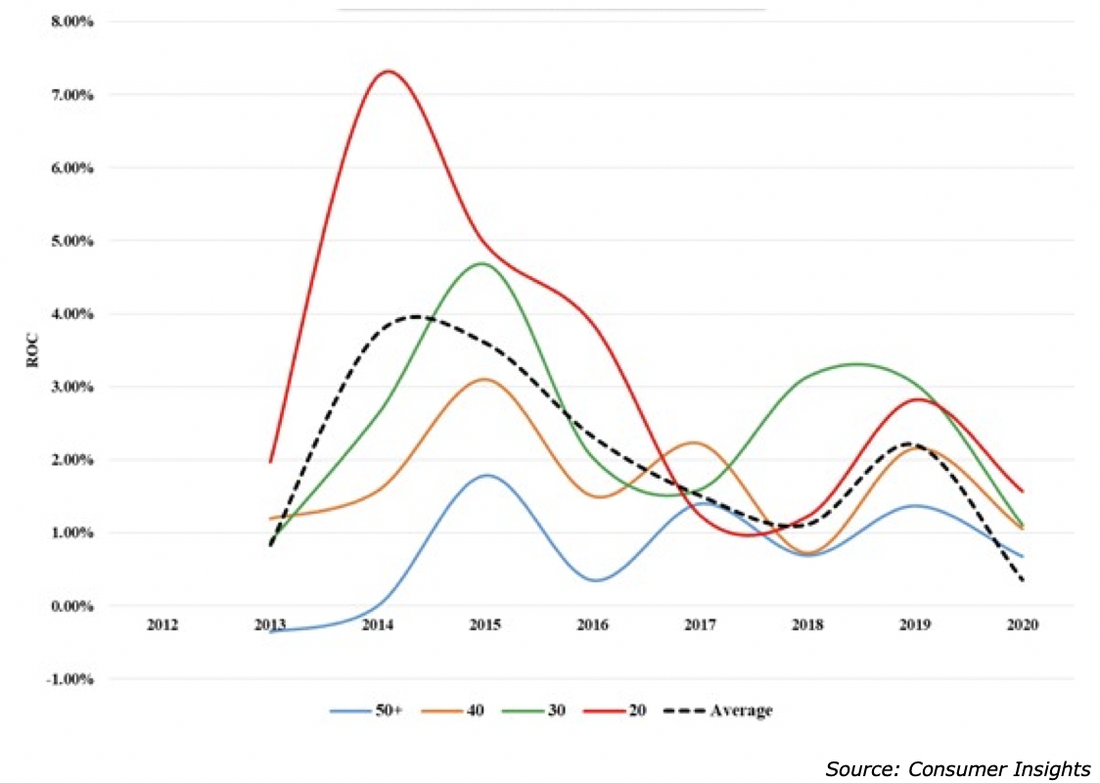