Even with 5G commercialization at its initial stage, the telecom world is preparing for 6G because it typically takes around 10 years from the start of research to commercialization of a new generation of communications technology,” said Sunghyun Choi, Head of Samsung’s Advanced Communications Research Center.
“Samsung defines three categories of requirements that have to be met to realize 6G services – performance, architectural and trustworthiness requirements.” The company will begin 6G research in "full-scale" this year, said Choi, with aims to have work done on defining and developing technical standards started in 2021. 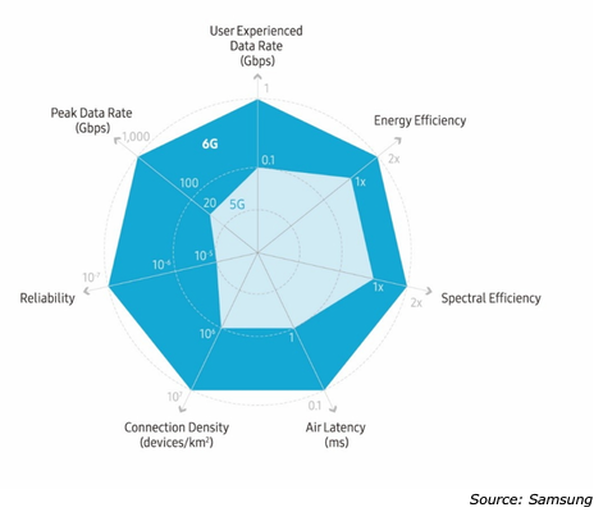 Samsung provided use cases for the tech, including truly immersive XR (AR/VR/mixed reality), jumping from current 4K tech to 16K VR streaming which requires downlink speeds of 0.9Gbps, noting current 5G connections can’t provide this speed. Examples of the new requirements, include:
Samsung is not on its own in looking at 6G, but the detail here is significantly more than previous acknowledgments of 6G research from other players like Nokia and Ericsson. There’s no way to know if Samsung was right about 2028 being the target , but it’s still important to get an idea of the coming future to shape the concepts.
Based on a worldwide population of 8.5b in 2030, expectations are that over 500b devices will be connected across worldwide networks.  That comes to almost 60 devices per person, including high bandwidth consumer devices such as AR/VR or some sort of holographic displays, and vast demand from medical and commercial applications.  In order to meet those demands the development of 6G standards has begun, with actual standards slated for 2025.

In order to meet such high bandwidth requirements, 6G is expected to be 50 times faster than 5G, with latency (internal network ‘wait’ time) 1/10th of 5G, along with networks that are AI based and able to adapt themselves to changing conditions on the fly.  From the standpoint of consumers, streaming a 4K movie, which at the minimum demands 18MB/s (25MB/s really), would demand 1/10th the bandwidth and downloading same would see a similar reduction, so what something that currently (4G) might take 160 seconds to download would take 0.16 seconds under 6G.

Once one gets past the world-changing rhetoric surrounding 6G, there is considerable research already being done toward the development of standards, with the usual players and governments supporting this early development.  The FCC has already allocated frequencies between 95GHz and 3,000 GHz for unlicensed development and China began 6G research last year with the formation of an organization that promotes what is now a national research project.  Both Japan and Finland have established key strategies for the development of 6G this year, and while we still have plenty of time before even basic standards are defined, the battle for dominance in 6G has begun.  Now if they could just get 5G working…