Vertical Divider
Why a DSLR with 16MP Produces Better Images than Smartphone
Cameras with 108MP
July 12, 2020

​Huawei continually boasts about including larger image sensors in its flagship handsets compared to its competitors. Sony and Samsung are increasingly highlighting the size of their sensors. To understand why camera sensor size is so crucial it’s necessary to look at fundamentals of light capture. A bigger sensor captures more light than a small one, and more light produces better-looking pictures.  At its most basic, sensor size determines how much light the camera has available to create an image. While resolution plays role, it’s the amount of light captured that determines a camera’s exposure balance, dynamic range, and even sharpness, which is why 16MP and 20MP DSLR cameras can still look better than today’s 108MP smartphones. Most smartphone sensors typically measure just 1/2.55 inches or about 1cm across, although some are larger at 1/1.7 inches and above. DSLR camera sensors clock in above an inch across, easily making them 4 to 5 five times the size. Smartphone sensors are tiny by comparison, although a few brands are closing the gap on the traditional point and shoot sensor size. The Huawei P40 series is the mobile industry’s largest at 1/1.28 inches.

The bigger the sensor, the more light it captures for a set shutter speed, ISO (exposure sensitivity), and aperture. While small sensor drawbacks can be offset using a longer exposure for more light, the pictures more susceptible to blur from hand shake and scene movement. Blur reduces image sharpness regardless of the sensor’s resolution. Similarly, wider aperture lenses are harder to build without introducing lens distortion artifacts, not to mention altering the field of view. More light makes larger sensors much better at low-light photography than smaller ones too. Camera photosites, the bits responsible for converting a scene into electrical signals, love light. Photosites can be arranged in different ways depending on the sensor, but in common smartphone bayer sensors they’re one pixel per photosite. The more light photosites receive, the better the dynamic range (perceivable steps between light and dark) they can produce. Photosites vary in size depending on the resolution of the camera and the size of the sensor. Keeping sensor size constant means that photosite size shrinks as resolution increases. Alternatively, for a set resolution, the larger the photosites go, the larger the sensor becomes.  This is important to note as photosites are crammed together in small sensors. Their close proximity means that occasionally light from one pixel leaks into an adjacent pixel. This is sensor noise and often shows up quite clearly in low light pictures and on solid colors like a blue sky. Smaller sensors and small photosites increase noise and decrease dynamic range. With the move to higher resolutions, bigger camera sensors have never been more important. Keeping pixel sizes reasonable is essential to maximizing the resolution potential of 48, 64, and 108MP cameras resulting in smartphone cameras that can’t extract the full level of detail expected from these numbers. Even so, these sensors are capturing more detail than ever in good lighting. Another recent trend in the mobile space is pixel binning technology, which combine pixels for better light capture. These larger sensors, and by extension larger pixels, are vastly improving the quality of low-light photography resulting in less noise and much better colors, even in dimly lit environments.

Bigger sensors also have an impact on the look and quality of images beyond resolution. Faster shutter speeds and lower ISO ensures make images look crisp and sharp and reduce the aperture requirement to capture lots of light, reducing the lens distortion artifacts, such as purple haloing. Larger sensors are a driving force behind better low light shots. Bigger sensors also help produce that fancy-looking bokeh blur effect associated with DSLRs, where the subject appears isolated and the rest of the image is blurred. Large sensors can use faster (higher) apertures and wider angle lenses to obtain the same effect as smaller sensors, or use similar apertures and narrower lenses for a stronger looking bokeh effect. While small mobile sensors can’t rival the effect available from DSLR, larger sensors help to close the gap.

Figure 1: Main Sensor Sizes Across A Range Of High-End Phones

It’s taken until 2020 for a good number of smartphone cameras to surpass the 1/1.5 inch sensor offered by 2013’s Nokia Lumia 1020, a historic titan of mobile photography. Larger sensors certainly aren’t a new idea, but companies are now prepared to embrace the aesthetic compromises that go hand in hand with bigger sensors. It’s also noteworthy that the Google Pixel 4 and iPhone 11 rank at the bottom of modern flagship sensor sizes, yet are regarded as some of the best camera phones. Clearly, sensor size isn’t everything when it comes to taking a great picture. 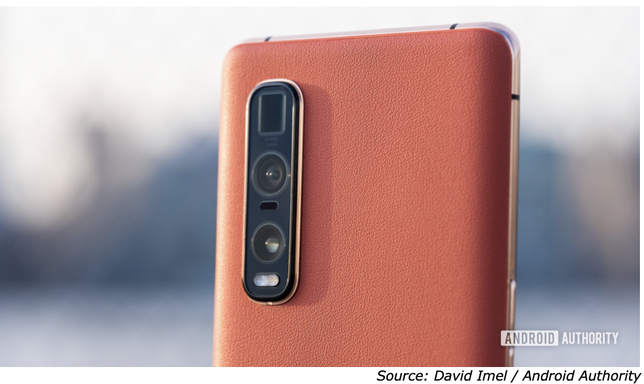 A quality camera also requires a brilliant lens, a powerful image processing chain, and software that gets the most out of the hardware. Smartphone camera quality is also increasingly driven by advances in computational photography and machine learning as included in the Google Pixel 4. So much so that smart software often beats raw megapixels for image quality. Even so, there’s only so much that great software can do with poor hardware. Intelligent cameras need a solid base to build from, and image sensor size is the essential ingredient in the race to better smartphone cameras. From: Android Authority
​