Vertical Divider
What to do With Excess– Make Automotive Sunroofs
June 21, 2020

LCD automotive displays, from entertainment to dashboard displays are now facing stiff competition from OLED displays but liquid crystal technology is now being repurposed and included in the Toyota Harrier (XU80) sold in Japan (known as the Venza in the US), a compact mid-size crossover SUV that was released yesterday.

What makes this automobile unique is the light controlling material produced by Asahi.  The sunroof of certain Harrier models will be made of Wonderlite, which is automotive glass with a film encapsulated between the sheets.  By controlling the voltage applied to the liquid crystal film, the sunroof can be changed from opaque to clear, while still eliminating 99% of ultraviolet rays (both modes).  According to the company, it is the first time that the technology has been used in a mass production vehicle. This liquid crystal process was developed by Kyusyu Nanotec Optics Co., based in Southern Japan and uses the same basic principal that allows liquid crystal to filter light in a display. With no voltage applied, the liquid crystals do not allow light to pass through (opaque), while when energized by a voltage they become aligned and the material becomes transparent. Kyusyu Nanotec is the LC film supplier, with capacity of ~100k ft2/month, while Asahi supplies the automotive glass and the interlayers . 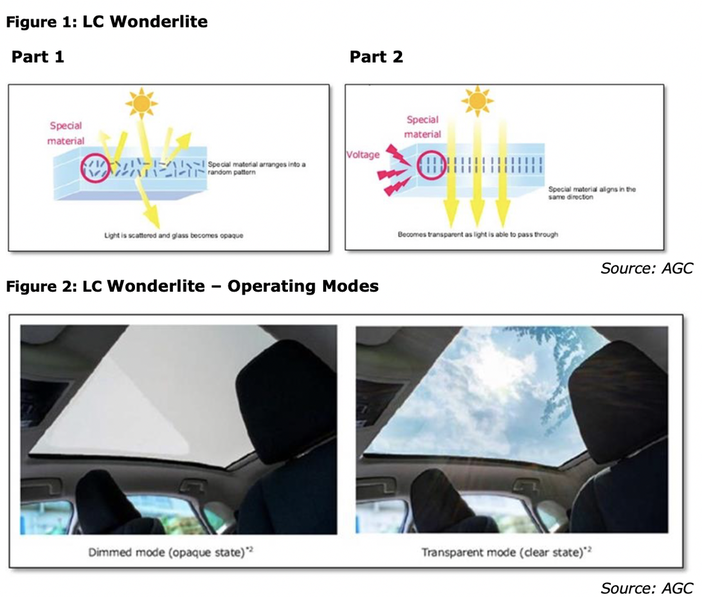