Vertical Divider
What is Happening with LG Display?
July 26, 2020

LG Display, changed its CEO at the end of last year and the results have been gloomy, although it is typical for a new CEO to get all the bad news out at the beginning of his administration. The company had expected to ship 4.9m OLED TV panels but with the delay in starting up the Guangzhou fab, Choong Hoon Yi, the CEO of UBI Research put the volume at 3.6m Before the global pandemic, Yi forecasted 6m units of shipments for 2020. At LGD Q220 earnings review, CFO, D.H. Suh said the OLED TV panel shipments would be between 4 and 5 million panels, but he wasn’t very convincing The shortage was originally attributed to Guangzhou’s late start, but the fab is now fully operational and has a current capacity of 60,000 substrates/month or ~1.6m panels from July to December. The Paju fab has a capacity of 70,000 substrates/month and can produce 3.1m panels over 12 months depending on mix, yield and utilization. The reduced shipment volume appears to be a function of lower demand and not supply. Through the 1H20, LGE accounted for 60%, Sony  20% and the remaining 17 OEMs 20%. To compound LGD’s problems, LG Electronics is recalling around 60,000 OLED TVs that were sold in South Korea to replace their power boards due to possible overheating issues. It will affect 18 different models of OLED TVs sold from February 2016 to September 2019. While the recall is an LGE issue, it affects negatively on LGD and their OLED TV initiative. LGD is in the midst of a transition, where it is eliminating LCD TV panel production, shifting LCD capacity from TVs to notebooks and monitors and investing heavily in OLEDs, although the company recently postponed an investment in its first Gen 10.5 fab. The effect of the transition was demonstrated in Q120, when the company had revenue of 4.724 KWR down 20% Y/Y and an operating profit of -0.362t KWR. In Q220, revenues were 5.307t KWR down 1% Y/Y, but up 12% sequentially. Operating profit was -0.669t KWR vs. -0.295t KWR last year. Display area shipped was down 32.2% Y/Y, but ASPs were up 43.4% and capacity, measured in sq. m of displays was down 29.5%. These Y/Y changes reflect LGD’s strategy to concentrate on OLEDs as they reduce LCD capacity. It should be noted that despite the changes, LG’s LCD capacity still represents ~77% of total capacity. 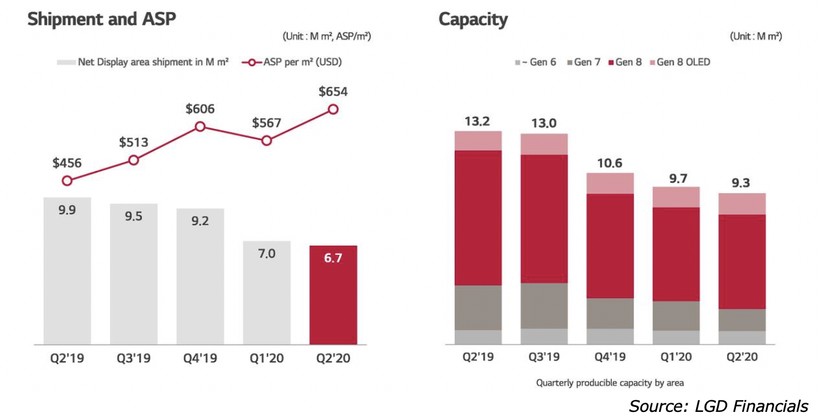 LGD, which supplies small/medium OLED panels to LGE, Google and Apple have been plagued quality issues.  LG Display has also been producing Apple watch displays at their  E2 fab in Paju, South Korea, but will be transferring that production to a newer and more efficient Gen 6 fab in Gumi, South Korea, and is expected to close the E2 fab. E2 has been producing OLED displays since 2011, although its original rigid OLED line was closed years ago.  Current E2 lines produce 42,000 sheets/month of flexible OLED capacity, although only 16,000 are currently in use, while the E5 lines are running 30,000 sheets/month, and maintaining a fab with such small capacity and older equipment is a costly process that eats into profits. 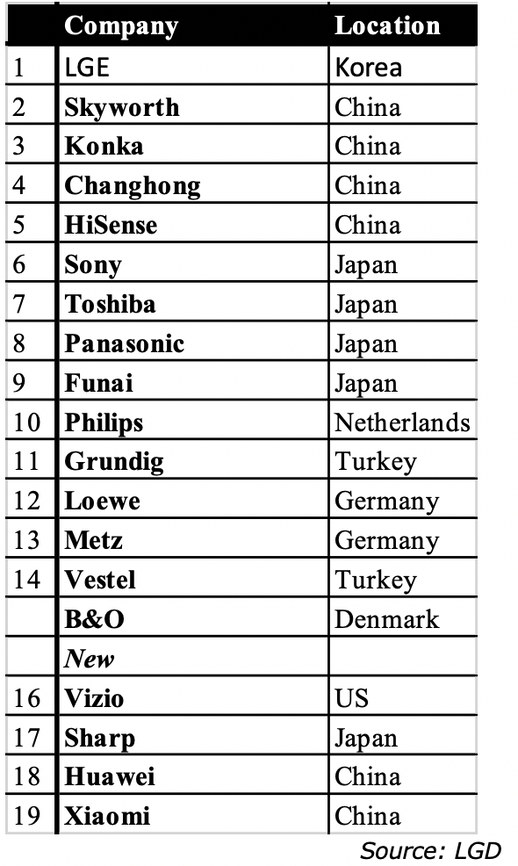