Vertical Divider
However, the sizes of the sub-pixels are different, with blue being the largest, red next in size and green the smallest. The light of these sub-pixels gets combined to form a specific pixel color. Having fewer sub-pixels means greater resolution per sub-pixel and greater lifetime – less current is required for a given luminance, allowing for a longer lifespan. The plaintiffs contend the arrangement allows Apple to reduce its production costs while misleading consumers that its OLED screens match the clarity of RGB screens of the same resolution.

The additional costs of OLED displays vs. LCDs seem to refute the claim that the use of OLEDs and Pentile is a cost saving technique. Furthermore, there is no standard definition of the size and shape of a sub-pixel, nor is the color defined. For example, there are systems with two or four primaries. Kinemacolor was the first successful color motion film process used in the early 1900s. It only used 2 color primaries. CMYK is a common printing process using four primaries. The hexachrome printing process uses six color primaries. Although most TV systems use three primaries (RGB), the Quattron TV is manufactured by Sharp and has four primaries (red, green, blue and yellow). There is no perfect set of primaries and there is no fixed number. A set of primaries is simply a set of colors in a color system that can make a useful range of colors (gamut).

They further claimed, "The iPhone X Product is advertised as having 2436×1125 pixels, but in fact does not use true pixels with red, green, and blue sub-pixels in each pixel," the complaint states. "Instead, the Product has only false screen pixels, with just two sub-pixels per false pixel (2436×1125×2 = 5,481,000 sub-pixels), and it does not actually have any sub-pixels at all in the notch at the top of the screen or in the display-area corners." As a point of comparison, the complaint says the iPhone 8 Plus has a higher quality screen than the iPhone X because it has more sub-pixels (1920×1080 pixels×3 sub-pixels per pixel = 6,220,800 sub-pixels). The legal filing insists the iPhone X actually has a usable screen area of 2195 x 1125 pixels, about 10 per cent less than advertised. It also takes issue with the screen measurements. "The screen is advertised as being 5.8 inches (about 5 and 13/16 inches), but is only about 5.6875 inches (5 and 11/16 inches)," the complaint says, claiming that Apple measures its screens as if they were square. In fact the iPhone models at issue have rounded corners, each of which cuts the diagonal screen size by about 1/16 of an inch. Apple's marketing copy claiming that its iPhone is "all screen," the lawsuit says, is false. The attorneys for the plaintiffs are seeking to have their lawsuit recognized as a class action.
Below is a picture of an RGBG pentile layout, which is used by Samsung in its OLED displays. The Red, Green, and Blue sub-pixels have very different sizes -- Blue is by far the largest because it has the lowest light emission efficiency, and Green is by far the smallest because it has the highest efficiency. The alternating Red and Blue sub-pixel arrangement leads to a 45 degree diagonal symmetry in the sub-pixel layout. This allows vertical, horizontal, and particularly diagonal line segments and vectors to be drawn with reduced aliasing and artifacts. In order to maximize the sub-pixel packing and achieve the highest possible pixels per inch (ppi), that leads to a Diamond rather than Square or Striped arrangement of the Sub-Pixels. It's a form of high-tech display art...This layout is used because of the human eyes sensitivity to green. It takes advantage of the eyes being more sensitive to green luminance. So green sub-pixels don't need to be as large to appear just as bright to the eye. Using the Pentile technique gives the panel maker the ability to increase resolution and lower power consumption. The downside is that in low resolutions, the text isn’t as sharp as an RGB layout, nor is any hard vertical lines, like when a black box meets a white background, or vice verse.
​
Figure1: Samsung’s PenTile Pixel Layout 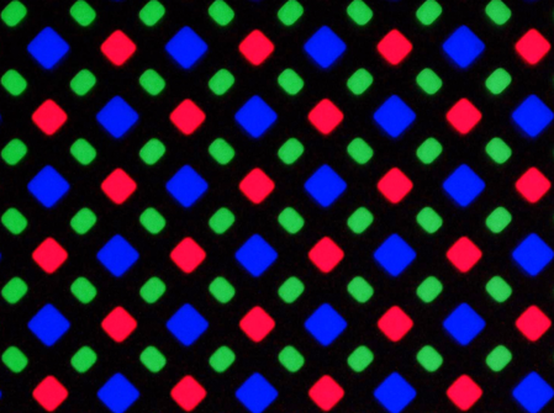 Source: DisplayMate
There's also the RGBW layout, which adds a white sub--pixel next to the standard RGB sub-pixels. This allows the display to use white when non-primary colors are required, instead of RGB, which has the effect of lowering power and reducing aging. Below is a picture of different types of sub-pixel geometries. The bottom right image represents the standard RGB sub-pixel layout, which is used in the majority of LCD displays.  Up until the use of PenTile it was the most used format for sub-pixel definition. 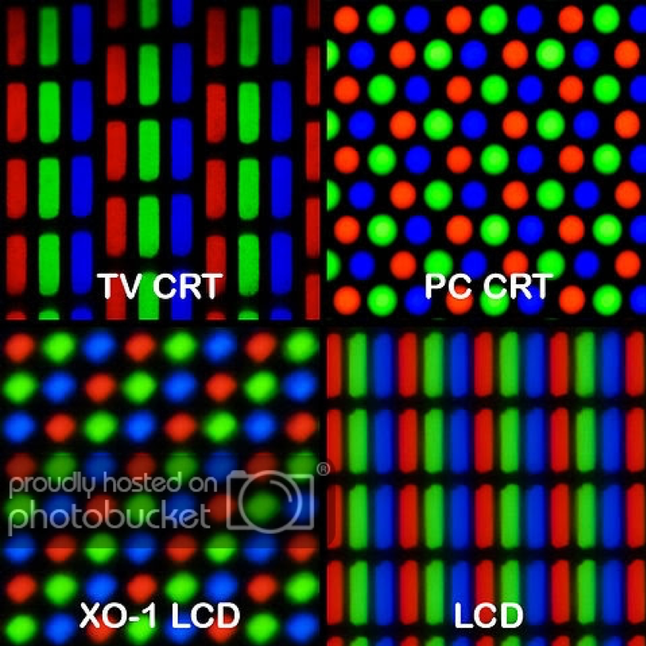