Vertical Divider
What is 6G?
May 17, 2020
​
If LTE was long term evolution, is 5G longer term evolution? Then, what is 6G. History has taught lessons that come from observing standards over the past five generations. For example,
These have been fairly consistent trends across all five generations of standards. What is new for the 6th generation of standards is that nations now recognize the importance of wireless standards for national economic well-being and national security. As a result, creating the fundamental technologies behind 6G has become much more competitive. One of the ways to predict what 6G may provide is to examine the direction of current fundamental and applied research. Three key enabling technologies are poised to drive the development of 6G: artificial intelligence (AI), advanced RF and optical technologies, and network technologies.

While 5G is known for a revolution in flexibility, 6G will likely be known for using AI to capitalize on flexibility. In the past, wireless research activities have made use of AI in various areas, such as the design of handover algorithms using neural networks and fuzzy logic. Practical implementations of AI based algorithms in wireless networks have been relatively rare. But, recent advances in learning techniques such as deep learning and new computing architectures are making these complex techniques feasible. The next figure shows what a 6G network could look like, with AI/cognition spread across all levels  and optimized jointly across the levels in the radio access network, the core network and applications. Such adaptability can improve the resilience of the network and lower operational costs and maintenance costs. 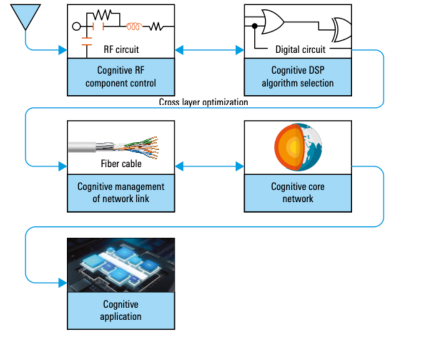 Source: Network World
RF can benefit from cognitive tuning of components to optimize for environmental impairments (such as interference) or the impact of aging or detuning of the circuitry. Modems and protocols can be adaptive to facilitate better spectrum management and demodulation, especially in the case of heterogeneous interference, something to be expected with the emergence of spectrum sharing. Federated learning technique can leverage each mobile unit as a sensor to provide a holistic yet detailed view of the interference and coverage issues across a broad region [32]. Mechanisms for supporting fronthaul and backhaul can be made more robust by using AI to find the appropriate mechanism for routing information, including the use of satellite or terrestrial wireless relaying. Studies are underway to examine the use of AI within the core network for system optimization, orchestration and maintenance. Security of this overall AI-RAN can be continuously improved through the use of adversarial learning – competition between an AI network attacker and an AI network defender to find vulnerabilities and their solutions [34]. At the application level, AI can anticipate the context and need
for application information and preset the network parameters to accommodate the anticipated information flow. (A form of “precognition”, a term from the science fiction movie Minority Report.)

One of the key enablers of 5G has been the low-cost production of mmWave devices
in recent times (in addition to the huge amount of spectrum available in the mmWave frequency bands). This trend is expected to continue, with higher frequency, more power efficient devices. Eventually, this technology trend may make terahertz (THz) communications economically feasible. A complete phased array can be placed on a chip [35]. Such a phased array chip would not need external power pins to communicate if wireless power is used.  Another factor is flexibility in RF components. The DARPA HEDGEHOG program is an example of such technology that is built on an RF field programmable gate array (FPGA) to create a very small radio that is highly configurable to cover a variety of bands from 10 MHz to 40 GHz as shown below. 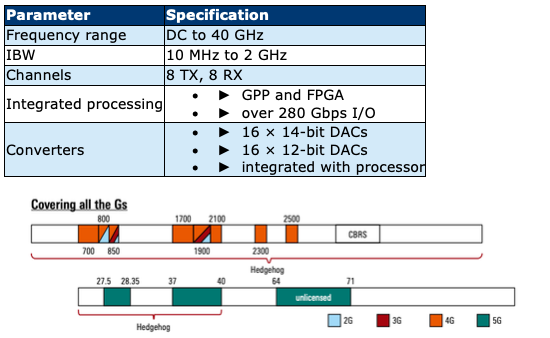 Source: DARPA
Such flexibility will work synergistically with AI to adapt the radio for the users’ service needs and the RF environment. Taking full advantage of such technology requires the development of new communication protocols.
Single-frequency full-duplex has been demonstrated and is a testimony to ever-improving RF technology [38]. In such a system, the transmitter and receiver operate at the same time and on the same frequency, conceptually doubling the spectral efficiency of a system by eliminating the need for frequency or time duplexing. Such systems work by performing interference cancellation at the RF stage to remove the high-power transmit signal. Such technology will provide an even more flexible spectrum management technique for the 6th generation of wireless communications.

6G will extend beyond 95 GHz into the high mmWave and terahertz range, including the optical spectrum. At such frequencies, communications tend to be short range, but the devices can be tiny to support technologies such as ultra-massive MIMO and applications such as small swarms (insect-sized collaborating robots). The FCC has made THz spectrum in the 95 GHz to 3 THz range available for experimentation as part of the Spectrum Horizons order. Optical 6G also shows promise with reduced interference, tremendous bandwidths, privacy to line-of-sight and an established technology base of devices that transmit and receive. Interestingly, ultraviolet light does NOT require line of sight; it scatters in the atmosphere.

Network technologies for 6G will continue the use of SDN, NFV and network slicing. However, 6G could take these concepts to the extreme, allowing customized network slices according to an individual’s needs and applications to create a truly customized quality of experience for that individual. Such a system with personalized network slices would inevitably leverage edge computing on a massive scale and create a very complex distribution of network responsibilities between the core network and edge computing nodes. New standards have a variety of metrics that include typical specifications of data rates, latency and availability. 6G will continue with the trend begun with 5G of defining quality of experience (QoE) over individual metrics. There will be higher data rates, perhaps terabits per second. Latencies may be as low as tens of microseconds, and perhaps information will be freshness dated with the age-of-information to aid in prioritized processing of information. Power consumption reductions that are already targeted for 10 year battery life for IoT devices in 5G could be further reduced to allow energy harvesting, including backscatter communications. 6G might also include both metrics and standards for energy harvesting and wireless power requirements. One might expect to see metrics for security resilience in 6G standards, especially with the potential of quantum computing to be able to break most encryption standards by the time 6G appears.

While 5G will introduce holograms, 6G would likely enable high-fidelity holograms on a massive scale. One possible new application area is providing ultra-low-power communications to tiny devices through energy harvesting or wireless power. Such devices could be part of the fabric of clothes or embedded into plastic or glass. They could constitute the communications between swarms of small UAVs or robots that can coordinate to perform complex tasks such as assembly and repairs. There may eventually be many thousands of radios per individual. Accomplishing this would require a standard with protocols that facilitate energy transfer (wireless power) or energy harvesting configuration merged with communications protocols.
We could see new applications that require a whole new level of latency management. For example, low enough latency for precise power grid control with distributed energy sources and sinks. Tactile sensing applications also push the limits for low latency. This could be accomplished with freshness dating information using an age-of-information metric to prioritize processing or it could be achieved by using AI to anticipate communications or application needs or potential faults to provide robust connectivity. Such capability will allow imperceptible seamless coverage, including a rapid transition between satellite communications and terrestrial communications.

In the late 1990s, an infrared version existed in the early 802.11 specification to provide up to 2 Mbps connectivity. It could be found on selected laptops at that time.
Services that require data rates even higher that ultra-high are inevitable. One possible service may be video wallpaper that uses large display technology to form the walls of a room with projected images. We are now seeing the emergence of 8k video, and data speeds to support 8k video are around 360 Mbps. Scaling this up to provide an immersive experience on each wall means that one wall may need well over 10 Gbps of communications speed for a real-time display. In this case, a terabit per second link is not an unreasonable need.  Sensing as a service is a possible new category for 6G applications. Could 6G signals be used to measure moisture or other particulates in the air to create a micro-climate profile? Could it be possible to leverage the signal as a radar signal to get very precise localization for indoor flying UAVs?  It is difficult to say at this point what 6G may bring. While an initial version of 6G might come in the 2030 time range, it will also undergo several years of revisions. Predicting what the standard will evolve to in 2035 is a fascinating but very speculative endeavor.
​From: Qualcomm/Network World