Saudi Arabia and Russia met but seem to disappoint investors that aren’t all that worried whether a deal’s actually ratified given that oil’s price already jumped up last week and again on Thursday. Oil companies’ stocks have been the US’s best performing this month after early reports of an agreement, suggesting the deal's already “priced in”, even if there are no production cuts until May. Those same investors might also question whether – with demand cratering alongside the global economic outlook – any agreed-upon cuts would actually boost oil’s price. Economists cautioned that unprecedented economic support from the world’s central banks and governments could eventually cause too-high inflation. The possibility of looming inflation is indicated by the following two charts. COVID-19 has been portrayed as war and in times of war debt levels blow out.

Figure 4: Public Debt as a Percentage of GDP 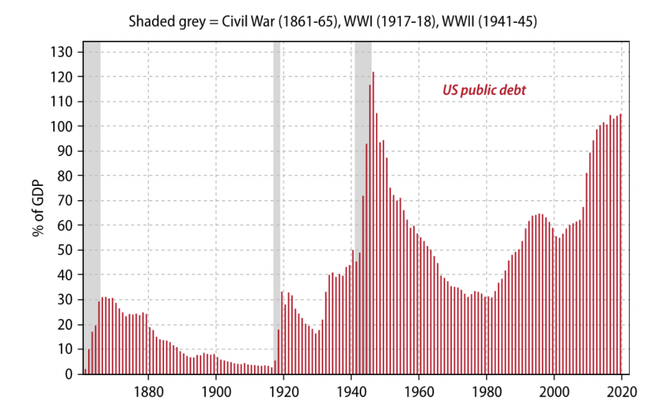 Source: Gavekal Data, Macrobon
What is more troubling is the growth in the public debt as a percentage of GDP, which is headed for record levels; 160% greater than the previous high at the end of WW II. Moreover, at that time, the US had a booming economy, while it is likely that when the COVID-19 pandemic ends, the economy will be shrinking.  High debt, lower GDP and possibly rising oil prices makes a good case for inflation that would push interest rates and subsequent payments, beyond US tax revenues. Economists says the dollar is protected because it is a safe haven, but will that situation continue under such unprecedented conditions? Ask your local economist!


Figure 2: Debt Held by the Public 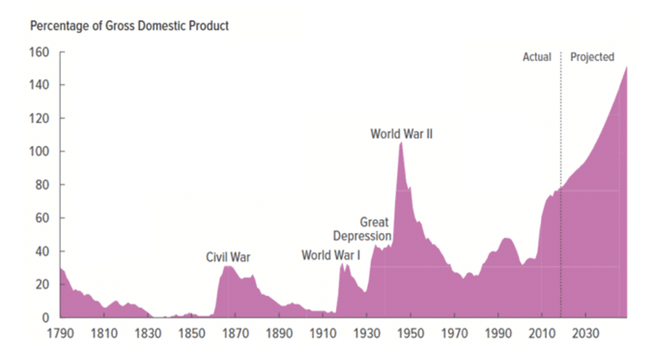