The tepid consumer reception to AR and VR products hasn’t stopped Facebook, Microsoft, Google, Amazon and Apple from the pursuit of consumer smart glasses. Amazon entered the smart glasses market with its Echo Frames, and Facebook is also working on its first pair in partnership with Ray-Ban. Rumors continue to percolate around Apple’s plans to release an AR headset or a pair of smart glasses (or both) sometime in the near future. Google Glass is undergoing refinement for consumers as is Microsoft’s HoloLens. The shift toward workplace-focused AR and VR products has been accelerated by slow adoption of consumer-geared headsets and glasses as well as an overall lack of breakthrough advancements in the fundamental tech that would facilitate an iPhone-style moment for the field. Microsoft’s  HoloLens, the second-generation Google Glass, and Magic Leap’s AR goggles are pumping money into consumer designs while and Facebook’s Oculus is one of the very few large tech companies still actively engaged in VR.


The much less heralded Vuzix, for which Intel acquired a 30 percent stake in the Rochester, New York-based company back in 2015 was back at CES 2021 with another pair of its smart glasses. The latest pair is powered by MicroLED technology from Jade Bird, which also plans to use Kopin backplanes. Their powerful monochrome display projectors are fitted into both sides of the smart glasses, which look comfortable to wear in public on a daily basis. Combined with Vuzix’s waveguide tech and its display engine optics for mapping the image onto the inside of the glass, the result is a set of glasses that can project a stereoscopic monochrome or color image onto both lenses at a variety of pixel densities and resolutions, depending on the software requirements.
Vuzix’s smart glasses are more heads-up displays than true augmented reality devices and are designed to mirror information from a paired smartphone. 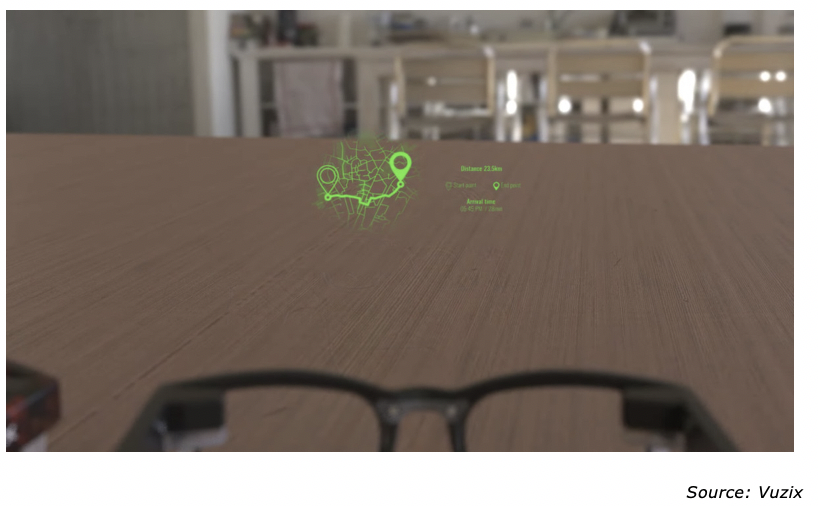