If virtual reality headgear is going to start gaining mass appeal, these wearables must be as light and as unobtrusive as possible. To this end, Facebook just unveiled some VR specs, which look similar to a regular pair of glasses. The compact look of these glasses is made possible by a new "optical architecture" that Facebook has been developing. It combines holographics with a special optical folding technique that, in simple terms, bends and reflects light back on itself – and that saves a lot of space when it comes to lenses.

With a lens thickness of just 9 mm (0.35 in), a field of view more than 90 degrees horizontally (similar to current VR headsets), and a resolution for each eye of 1,600 by 1,200 pixels, the prototype specs promise a much more compact AR/VR future.
These prototypes though don't include any kind of battery or light projecting component at the moment, and they can only produce images in shades of green and black. The pictures show just the lenses and the frame. Most current VR headsets make use of LED optics, so switching to holographic optics in this way requires a rethink of other parts of the VR hardware setup too, but the end result could be a richer range of colors as well as less bulky devices. 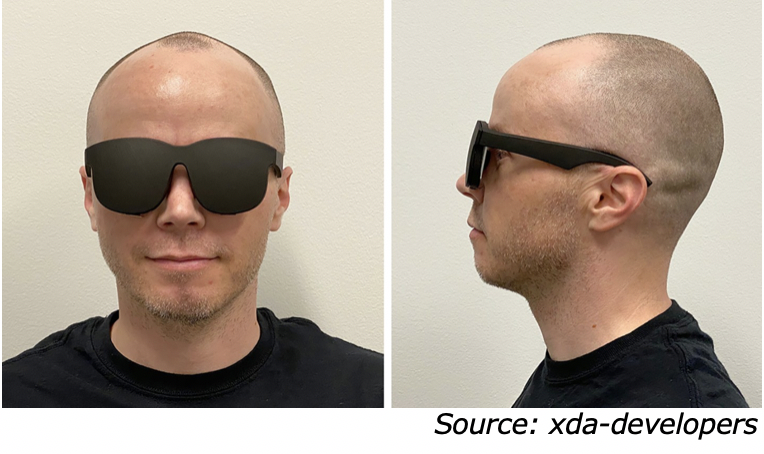 Devices like the Oculus Quest are already less bulky than the predecessors that emerged in the early days of VR, and Facebook's research promises more improvements in the years to come. "Lightweight, high resolution and sunglasses-like VR displays may be the key to enabling the next generation of demanding virtual reality applications that can be taken advantage of anywhere and for extended periods of time," write the researchers in their paper, due to be presented at the virtual SIGGRAPH 2020 conference in August. At the time of writing, Facebook-owned Oculus sells the computer-connected Oculus Rift S, and the less powerful but completely standalone Oculus Quest. Prototypes of virtual and augmented reality glasses that can slim these form factors right down are very much at the prototype stage – miniaturizing this kind of technology takes time, effort, and money, so don't expect a commercial model like this anytime soon.

A device with a screen that measures less than an inch has been developed by Cinera Edge, which compensates by cramming it up to within an inch of the eye. This portable personal cinema headset packs a 5K resolution display and Dolby Surround Sound. Personal cinema headsets have been threatening to break into mainstream use for almost a decade now, but have continued to disappoint. For years they were either big ugly boxes that make it uncomfortable to watch anything longer than a 20-minute sitcom, or smaller units with low-res, eye-strain-inducing screens. 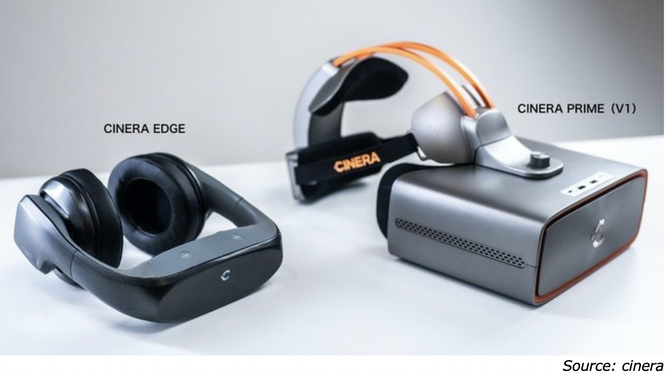 The screen itself is mostly unchanged from the previous version, but what has changed is the bulk. The Cinera Edge measures 197 x 207 x 103 mm (7.8 x 8.1 x 4 in), and weighs 490 g (1.1 lb.). The company says the weight is shifted towards the sides rather than the front, to make it easier to wear for longer periods. It now looks like something that we could potentially see ourselves watching a whole movie in – within reason of course. Scorsese’s The Irishman is probably out, but a 90-minute comedy could work. Beside weight, another limiting factor dictating the length of a session is the 5,200 mAh battery, which lasts around three hours. The system runs on the Android 7 operating system, and can natively run streaming apps like Netflix, YouTube, HBO Max, Disney+, Hulu, and Twitch. There’s also a MicroSD card slot, for loading videos.
A Pro model also includes an HDMI port, so it can connect to basically any Blu-Ray player, computer, games console or other source. This model also packs Dolby Digital surround sound, with four speaker drivers in each ear, and a larger storage capacity – 32 GB, up from 16 GB on the regular model.
​
There’s a range of other features too. There’s a touchpad on the outside of the ear to control the menus, and native 3D content support, since each eye uses independent screens. The view can also be adjusted depending on your needs. the distance between the two can be adjusted, as can the focus, so if you normally need glasses you won’t have to squeeze them in under the headset. The Cinera Edge is currently seeking funding on Kickstarter, where it’s already raised over $325,000. The regular model starts at $449, while the Pro is available from $549. If all goes to plan, shipping should begin by December 2020.