Vizio’s CEO attended the opening of LGD’s Guangzhou fab in August’19 presaging their adoption of OLED technology. Vizio, the last TV company headquartered in the US came to fame when it found that typical TV set selling channels were not interested in taking on a ‘new’ brand for fear of alienating leaders Samsung Electronics, Sony and others, so Vizio did something no other major TV brand had done at the time and went to big box retailers, selling units stacked on the floor of warehouse giants, rather than through traditional distribution channels. Vizio TVs became a prominent part of store displays in Sam’s Clubs, Costco and similar stores, with unusually large displays near the entrances.  The sets, which sold at a discount to premium brand TVs were a hit among consumers and the brand was established.  Since then CE retailers like Best Buy have taken on the brand. Vizio continued to grow and by October 2015 had filed an application to the NASDAQ for an IPO which did not occur.  In July 2016, LeEco, the TV brand started (and ended) by Chinese entrepreneur Jia Yueting made a $2b offer for Vizio which looked like it was a done deal. The deal, which would have made the combined entity the 3rd largest TV brand worldwide, was cancelled in April 2017 with Yueting citing ‘regulatory headwinds’, which were likely the fact that he was extremely overleveraged, leading to his eventual downfall. Since then Innolux and Foxconn have taken an almost 14% stake in Vizio, which gives the company direct access to Innolux and Sharp along with Foxconn’s worldwide assembly facilities. Vizio has been passed by TCL , which is now the go to brand for low cost TVs in the US and is #2 to Samsung, but has been as high as #1 in the US.  Vizio, in need of a new initiative has adopted OLED TVs.

Vizio’s OLED TV panels are, of course, produced by LG Display (LPL) their two models (55” & 65”) have a lower price points than US competitor’s, LGE and Sony.  Older discounted OLED TV models are still available from LG and Sony at lower prices, although the new Vizio models are still competitive against most older models in many cases.  Given that between 30% and 55% of yearly TV set sales fall in 4Q, expect considerably more price competition as the holidays get closer, but for the time being, Vizio is the price leader for OLED TVs. One other price point to consider, Xiaomi sells its 6%” OLED for $1840 in China and India. 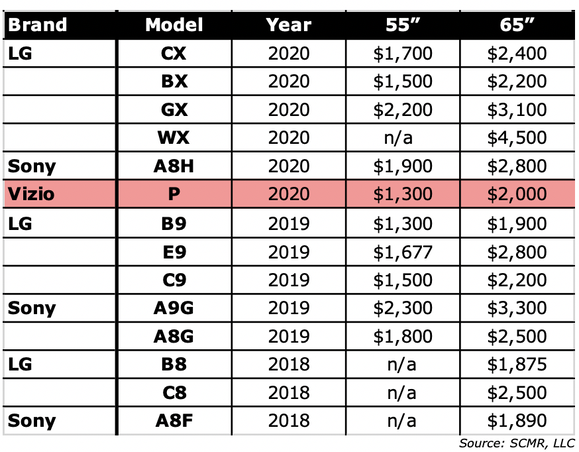