Visually, there's not much difference between the trio, as the screen size, central punch-hole camera, and proportions are all much the same. Side- and back-on, however, and things change because of device thickness related to the camera unit.

The X60 Pro+ an exclusive color and vegan leather finish option to set it apart (which looks strangely plasticky, as you can see from our Pro versus Pro+ picture top of page), while the X60 and X60 Pro offer two finishes - in black or blue.

The OLED panel links all X60 devices: each has a 6.56-inch Samsung-sourced AMOLED panel, the refresh rate is 120Hz for all three handsets.
Much like the previous range, too, the X60's screen is flat, while the X50 Pro and Pro+ adopt curved edges - the latter pair, therefore, show slightly less side bezel for a more screen dominant look.

Cameras
The biggest difference between these three phones is their cameras. But while the last generation totally changed the camera in the Pro+ model, for this generation line-up it's a more logical approach.

The X60 series is also the first to showcase the co-engineering partnership with Zeiss, the renowned German optics company, which has provided its knowledge and, in the case of the X60 Pro+, even its famed T* lens coating to apparently reduce unwanted flare and ghosting.

What you will find in all three phones is optical image stabilization, which is handy to help keep shots sharp. But the really impressive system is the new gimbal stabilization system 2.0 - which we've found to be exceptionally good when capturing video - which features in the X60 Pro and Pro+.

However, the gimbal system isn't on the same sensor in each device. The X60 Pro has this system on its main 48-megapixel sensor. The X60 Pro+, meanwhile, utilizes Samsung's GN1 sensor - which is physically large, just as you'll find in the Samsung S20 Ultra, and therefore too big to mount with the gimbal we believe - in a same-style setup as per the X50 Pro+ of last year, then adds the gimbal stabilization to its new-and-improved 48-megapixel wide-angle camera.
Which lens is used for which task will vary depending on which phone you get, no doubt, with the goal to get the best quality stills and videos with the best stabilization on offer.

The X60 Pro+ is also the only one of the three to add in an optical zoom lens - a 5x one - aiding it to capture better detail resolve for those farther away subject shots.
To house all those goodies all three phones, have pretty large camera enclosures. The X60 Pro+'s is bordering on ridiculous, as you can see from the picture up top. But, hey, it's all fair game if the quality is this good - and no other maker is pushing a gimbal system as sophisticated as what's on offer here.

Interestingly the X60 and X60 Pro don't take on the top-end Qualcomm Snapdragon platform, instead offering the 870 chipset. This isn't actually a huge surprise - in part because it's a cost-saving exercise - but it's still super powerful and 5G capable.
Plus it gives the Pro+ even more room to show off, as that model adopts the Qualcomm Snapdragon 888 - which is as good as things get right now - along with 12GB RAM as standard. It's also 5G capable, of course.
Battery capacities marginally differ between the entry-level handset and the Pro and Pro+, but not to a degree that it's likely to make a huge difference to longevity. Charging is quick at 33W, stepping up to be extra-quick (55W) in the Pro+ handset. 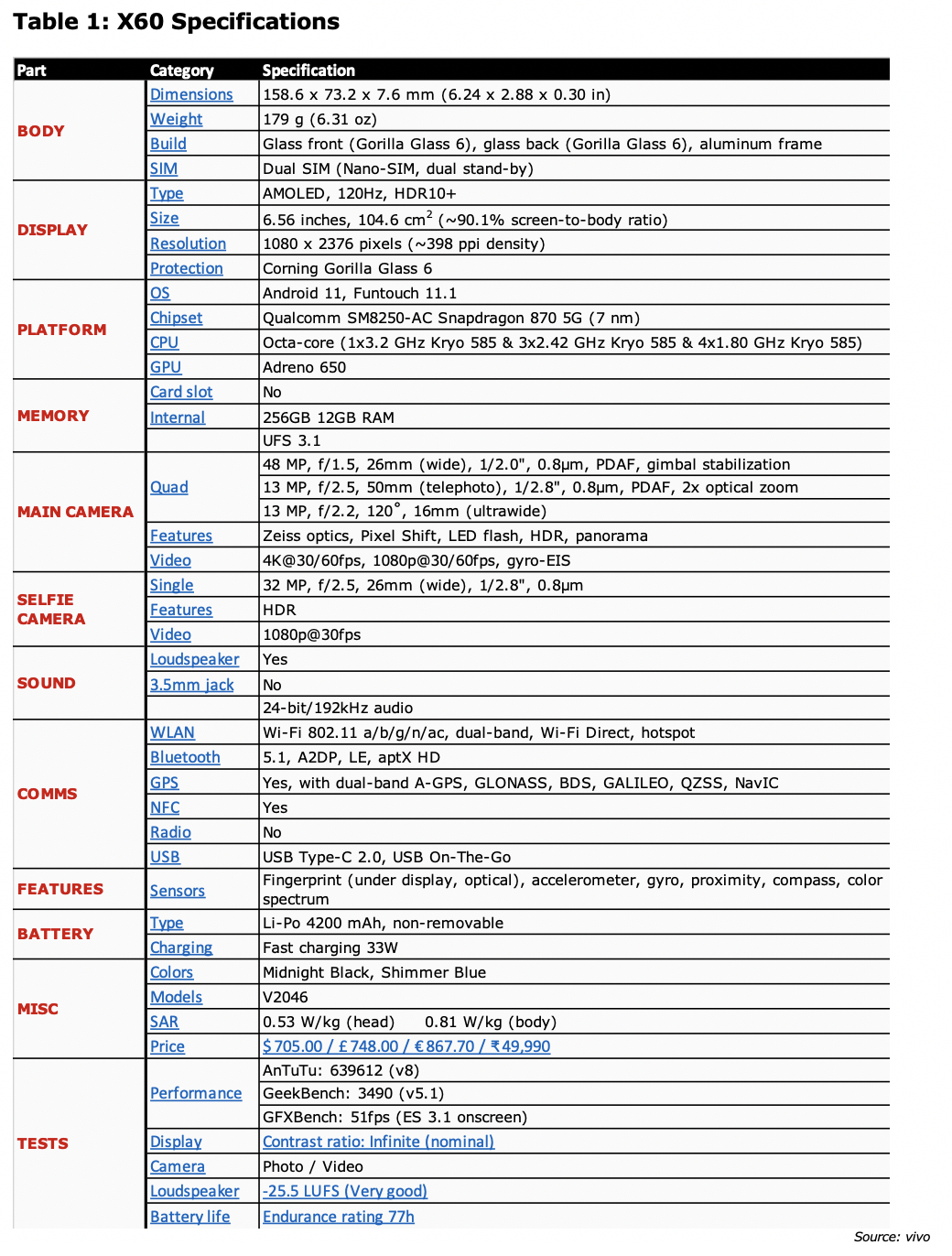 None offer wireless charging, though, which as an increasing norm in the competition may seem like an absence here.

Besides, given how the X50 series launched globally - including its X51 name change - we suspect the X60 will follow a similar process. But hopefully with a better name (or no change at all).

Vivo is pushing these handsets into the global market, for the simple fact that the gimbal stabilization system is a real top-end feature that isn’t available elsewhere.
​
And with Zeiss also on the cards, vivo could be in contention as the smartphone camera maker to watch out for - ideal at a time when the competition, such as OnePlus with its Hasselblad partnership, still aren't quite cutting it.