Counterpoint reports that Xiaomi maintained its position at the top of the smartphone market in India with a comfortable lead, in terms of market share. Its Redmi series of phones still fueling its sales, with over 8.5 million phones sold during the October holidays. While Samsung retained its second position in the yearly chart, it slipped behind vivo in the fourth quarter. 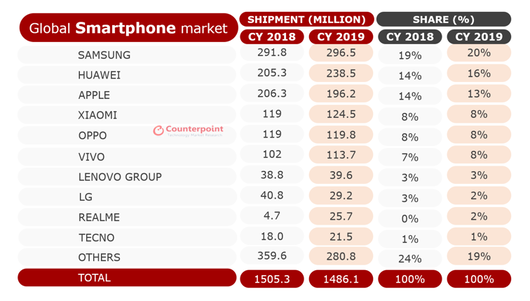 Source: Counterpoint Research
​The Indian smartphone market was the 2ndlargest market worldwide, surpassing the US for the first time.  While the Indian market growth was relatively low at 7% the market is considerably under-penetrated and Chinese brands have been quite aggressive in providing Indian customers with flagship level features in more moderately priced smartphones, which continues to push the replacement of feature phones, whose sales declined ~42%.