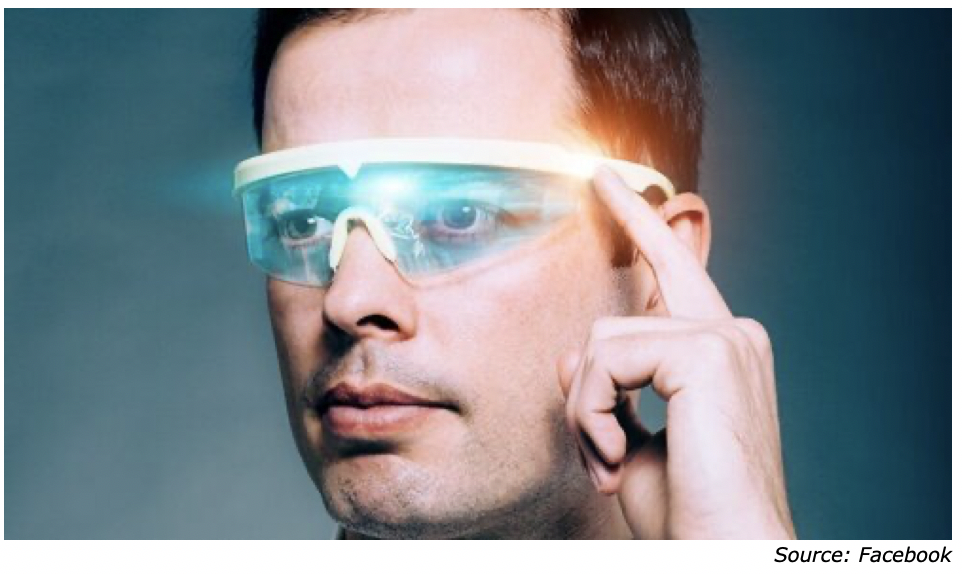 Depth perception is crucial for the human vision system to interpret events in the three-dimensional world. 18 depth cues determine distances between objects and their relationship to you, and each other. The brain makes sense of these depth cues in the real world to provide an understanding about your surroundings.

Most of the AR wearables available today, such as smartglasses or head-mounted displays (HMDs) display digital images at one or, at best, two depth planes causing AR projections to be mismatched with the real, three-dimensional world. If you look at the following illustration, images on the left show what today’s experience of using an AR wearable might be like. The bowl of apples is supposed to be placed on the sofa in the background, but it appears sharp, even if the viewer (in this case the camera) is focused on the near field. Similarly, the green virtual apple remains sharp even when we focus on the back field. To render this virtual scene correctly, we need a display technology capable of projecting multiple depth planes. Just like in the images on the right where the virtual apple and the bowl appear correctly in or out of focus depending on where we look, adapting to what our visual system expects.

Arm is collaborating with VividQ to enable holographic display on a mobile device by making VividQ’s software compatible with Arm Mali GPUs. The collaboration will enable the integration of holographic display into future AR wearables. According to a report by ABI Research, shipments of smartglasses are expected to reach 20 million units by 2024. Due to the ubiquity of Arm IP among mass market consumer electronics, from smartphones to DTVs, this is seen as a vital collaboration to ensure the accelerated adoption and scalability of holographic display. Therefore, this partnership could help to bring improved AR experiences to millions of consumers worldwide.
​

Tom Durrant, Co-Founder and Chief Development Officer of VividQ says:
“Technologies, such as navigation assistance, messaging and entertainment, are now irreplaceable and becoming increasingly integrated into our lives. The migration to AR wearables and next-generation consumer electronics makes these applications more natural to use, and calls for a correspondingly natural, immersive viewing experience. VividQ provides this with CGH. We are delighted to be working with Arm towards this ambitious goal of integrating CGH in mobile devices. By combining VividQ’s software expertise with Arm’s solutions in high-performance integrated compute, we aim to jump-start the mass consumer adoption of AR with holographic display.”