​Recently, a report shows that Huawei seems to be working on a smartphone
with a highly rounded display and an under-screen camera. This is evident from two patent applications which now have CNIPA approval. 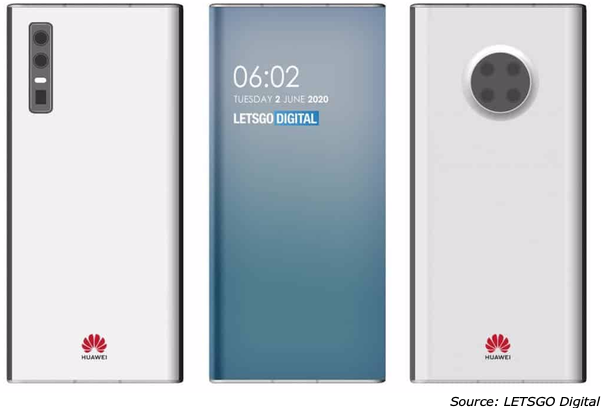 The publication date of both patents is June 2, 2020 and each includes 7 product images of an unannounced Huawei smartphone. Basically, the two patents are alike – only the rear camera system differs by model. The product images show a full-screen Huawei phone. The screen extends very far to the sides – further than the current waterfall display on the Mate 30 series. There are also no physical buttons on the sides of the device. For the volume keys, Huawei has long used the principle that these can be called up virtually via the sidebar. The bottom of the device offers space for a USB Type-C connection.

Huawei may be looking at Visionox for the display as they have announced a new under-screen camera solution using cameras that do not take up any screen real estate. Xiaomi’s Mi Mix Alpha OLED display is supplied by Visionox.  South Korean and other Chinese panel producers have been working on those problems for years, as current smartphone resolutions of over 400 pixels/inch limit the amount of light available to cameras that are positioned under a display. Attempts at reducing pixel count over the camera’s position lead to color shift issues and an overall reduction in pixel count across the display to allow more light to the camera degrades the whole display, and camera areas in prototypes tend to become visible when viewed off axis.

Prototypes from other smartphone brands have promised under display cameras with no compromises but no commercial product has been able to deliver on those promises, with most using some combination of larger camera lenses (to bring in more light) and software to compensate from haze or color bleed that comes from the display itself.  The Visionox solution called InV see™ is said to be based on a new higher transparency material used in the OLED display along with new driving circuits and pixel structures, all designed to allow more and higher quality light to reach the camera, without compromising display quality and eliminating the potential differences between the OLED screen and the section above the camera.

Visionox starts mass production of OLED panels that support under screen cameras, with the first smartphones with a sub-screen camera appearing this year. OnePlus product manager said that already in the second half of this year, the technology of the sub-screen camera will enter mass production and will be embodied in commercial products. At CES, we reported on in-display, or in-screen selfie cameras shown by Samsung with a prototype, set to replace notches, holes, pop-ups for capturing selfies from front-facing cameras.
Now a Visionox is producing the technology in mass production: