Google, Qualcomm, Intel, Micron, Qorvo, Western Digital Xilinx and Broadcom reportedly ceased trading with Huawei, based on an executive order that gives the Secretary of Commerce the ability to target companies it feels are a national security risk and puts pressure on China to step up their negotiations concerning a trade deal with the US.

Source: Bloomberg
By naming Chinese companies specifically, rather than ‘suggesting’ that US companies don’t do business with them, the order forces any US entity that uses equipment made by Huaweito either petition the government for an exception, or cease any transactions with the company, although the Commerce Department  is ‘considering’ a temporary general license to ”prevent the interruption of existing network operations and equipment”, essentially a way to keep existing Huawei telecom equipment from having to be shut down if it needs any kind of service or parts from Huawei, but would exclude parts needed to create new products.


Huawei’s inability to use US parts could negatively affect global smartphone assembly volume. Furthermore, with Huawei being the world’s biggest telecommunication equipment maker, it could also slow down the commercialization of 5G technology. However, the Huawei ban creates a great opportunity for Samsung Electronics and its affiliates to gain market share as shown in the next figure.
Figure 2: Opportunities for Samsung in light of U.S. Ban on Huawei 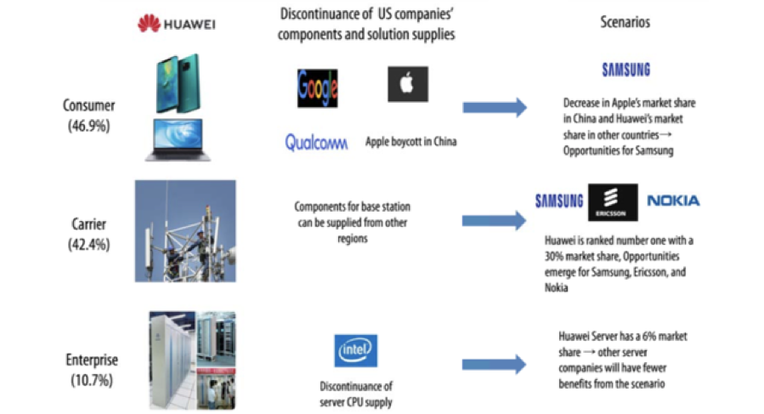 Since Huawei’s smartphones run on Android OS, Google would no longer be allowed to supply Android OS updates to Huawei limiting Huawei to versions of Android to those that are ‘open source’, basically the Android Linux Kernel, but almost all smartphone brands adapt that kernel to make it ‘unique’ and pretty much every piece of code that rides atop the Android kernel is proprietary, which means if it is owned by a US company, Huawei cannot be supplied with updates. Since the last Huawei phone to officially launch in the U.S. was the Mate 10 Pro in early 2018, though the more recent Huawei P30 Pro is available unlocked from some U.S. retailers in the Latin American version. The mobile industry is littered with unsuccessful attempts to build an alternative to iOS and Android—Windows 10 Mobile, BlackBerry 10, webOS, Firefox OS, and Ubuntu Touch have been abandoned on smartphones, due to difficulties in cultivating an ecosystem. Fundamentally, the only way Huawei can continue using Android would be to build a custom version of Android using AOSP (Android Open Source Project) code, exactly how developers of custom ROMs do. Unlike custom ROMs, however, Huawei might not be able to strap GApps along with the package without going unnoticed by Google. According to a report by Caijing, Richard Yu, the CEO of Huawei Consumer Business Group, said Huawei’s OS could be available later this Fall or early next year on phones, computers, tablets, TVs, cars, and wearables.

Perhaps in response to the actions of the U.S. government, China’s president recently visited one of China’s rare earth processing facilities, an obvious show that China can retaliate, as China is the source of 90% of the world’s rare earth minerals an essential part of the electronics business. Denying access to these materials would effectively shut down operations of most semiconductor operations in the U.S. 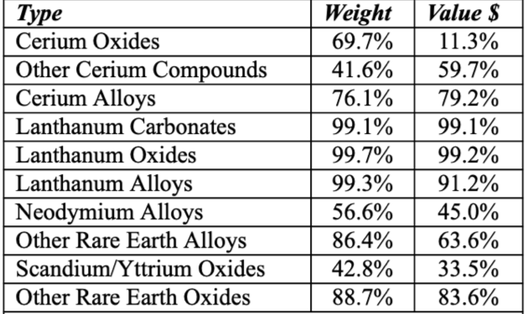 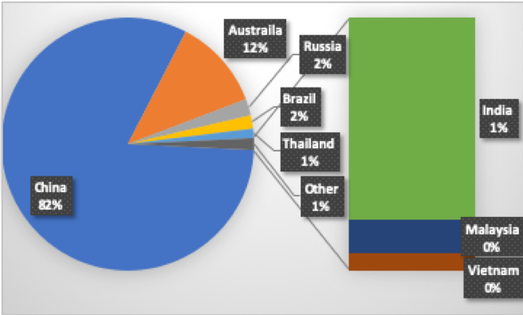