Universal Display renewed their license and material supply agreement with LG Display.  The new agreement will run for 5 years, and while terms were not disclosed, previous agreements were based on a license/royalty fee on units shipped, which has been the standard agreement terms for all of UDC’s license and material agreements, other than with Samsung Display, which pays a quarterly fee rather than one based on unit volumes. 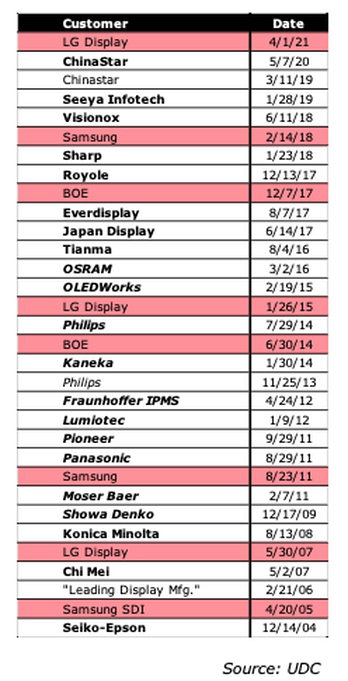 ​In years before ASC 606 Samsung’s license fees were easy to spot given they were paid twice yearly, while now they are prorated against material sales on a quarterly basis regardless of when received. The previous long-term agreement with LG Display was to extend until 12/31/22, making the early extension a bit unusual. Most OLED display producers have signed license agreements with UDC.  Those UDC agreements with OLED panel and lighting producers that have been made public since 2004 are listed below.  Those shaded red are key customers and those in italics are based on OLED lighting.