Currently, Samsung, LG and Sony use a stamping process based on the pick-and-place concept for mass transfer of LEDs to the PCBs for their large TVs. Pick-and-place stamping involves the use of static electricity, Van der Waals forces, and magnetic force to pick up a large amount of MicroLED chips and move the chips to a target backplane. While the stamping process is sufficiently mature for mass production it is deemed to be too slow and too expensive causing the development of mass transfer options with faster, more efficient, and more flexible transfer, including laser transfer.

Laser transfer is the process of using laser beams to quickly transfer a great number of MicroLEDs from the LED wafer to the target. Typically, the μLEDs are prepositioned  to a common format of the target. In this process, a transparent substrate (mostly a quartz or sapphire substrate) is used to carry the μLEDs  in ​through a specific intermediate material. Then lasers are used to illuminate the transparent substrate and prompt it to react with the intermediate material, whereby selective transfer of components are made using photomasks. Depending on the laser wavelength and material property, the laser transfer can be further divided into laser direct release and laser ablative release.

Executive VP of K&S Chan-Pin Chong specified that the cost decides whether mass production and commercialization of MicroLEDs is feasible.  Chong said. “The transfer and repair costs of MicroLEDs are very high, particularly that for single die. If a MicroLED monitor has one or two defective dies which cannot be fixed, the product must be disposed of.

K&S launched its first-generation mass transfer equipment that pushes the transfer rate to the next level with a unique placement approach introduced in 2018. Presently, MicroLED manufacturers are trying different mass transfer techniques but there are no standard solutions. K&S decided to adopt laser transfer because the approach can potentially have greater efficiency. 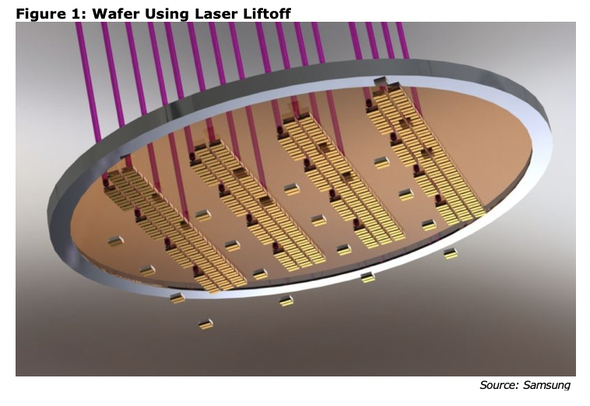 Uniqarta Laser-Enabled Advanced Placement (LEAP) technology uses a highly accurate, ultrafast laser transfer placement system. Because of its non-contact nature, LEAP allows die placement in large quantities with an increased transfer rate as well as inspires K&S to develop next-generation high-accuracy solutions, thereby promoting wide application of multi-functional and low-cost display technologies. LEAP, as a cutting-edge LED transfer technology, is expected to speed up the introduction of Mini LED backlights to the market and facilitate the application of Micro LEDs to direct-lit displays.

Chong said that in addition to actively developing MicroLED technologies, K&S optimizes its facilities per the target LED products. For instance, the company developed ConnX ELITE™ Opto, an LED wire bonding system with the following features: software suite allowing bonding wires of different materials (i.e., gold, silver, copper, and alloy), sensor positioning during wire bonding, built-in magazines and pusher arms, as well as light sources including straight light, edge light, low-angle edge light, and red and blue lights. The machine has functions designed for LED wire bonding. ConnX ELITE™ Opto can be optimized as per requirements of the LED product in question, whereby the hardware and process can be improved for optimal output. The equipment also supports wider, thinner lead frames and substrates and allows multiple LEDs—whether or not they are of the same types—to be placed within the same module, thereby facilitating fast introduction and cutting time to market. (This content for this article came from TechNews)
​