Under-screen camera tech combines hardware innovations and proprietary algorithms to achieve a balance between screen and camera quality. The technical and manufacturing-related challenges include inconsistent display quality in the specific screen area above the under-screen camera, poor image quality caused by obstruction of the camera by the screen, and display reliability issues affecting the overall lifespan of the handset. Some important upgrades include Better Pixel Geometry: The new solution shrinks the size of each pixel without decreasing the number of pixels to ensure a 400-PPI high-quality display even in the camera area. Transparent Wiring And New Design: Oppo's new prototype replaces the traditional screen wiring with a transparent wiring material. The width of the wiring has also been reduced by 50% to achieve a smoother visual experience. Better Control of Screen Accuracy, Color, And Brightness: The new under-screen camera solution upgrades the pixel-circuit standards to better control the chromaticity and brightness of the entire screen. In OPPO's prototype each pixel circuit driving only 1 pixel ("1-to-1") resulting in light deviation of 2%, thus improving the visual experience while using the phone's display for day-to-day tasks. Improved reliability and lifespan: The "1-to-1" pixel circuit and new optimization algorithm should improve the screen's lifespan by up to 50%. OPPO also expects better front-facing camera performance with its third-generation under-screen camera solution. The team has designed new imaging AI algorithms (diffraction reduction, HDR and AWB) to reduce inconsistencies in under-screen cameras, such as blurry images and image glare. ZTE Axon 30 5G- Production Ready Under-Screen Camera Phone. 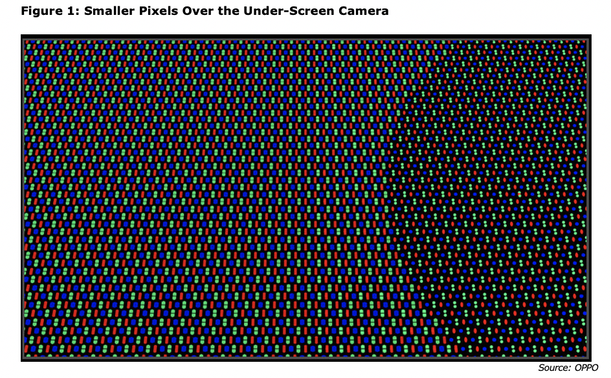 ​The new USC solution features one-pixel circuit to drive each pixel, which gives precise control over the screen’s chromaticity and brightness with a deviation of just 2%. This ensures that users cannot see any brightness or color difference between the part of the screen in front of the camera and the rest of it. The 1-to-1 pixel architecture, along with an anti-burn-in algorithm, also increases the screen’s lifespan by 50% compared to the previous solution. 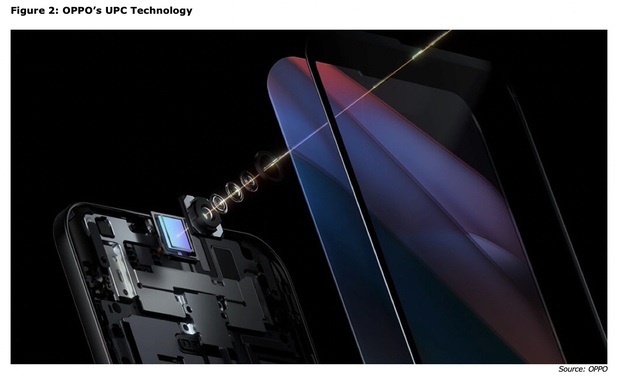 ​On top of the enhancements to the screen in front of the camera, OPPO’s next-gen USC also uses proprietary AI algorithms to improve the quality of images captured by the camera. The AI diffraction reduction, AWB, and HDR algorithms ensure that the images captured by the under-display camera are better than those captured by the previous solution. OPPO hasn’t shared any plans of bringing its next-gen under-display camera to a production smartphone. But since the new solution successfully solves some of the key issues faced in the previous iterations, the company might include it on a production smartphone soon. We’ll make sure to let you know as soon as that happens. 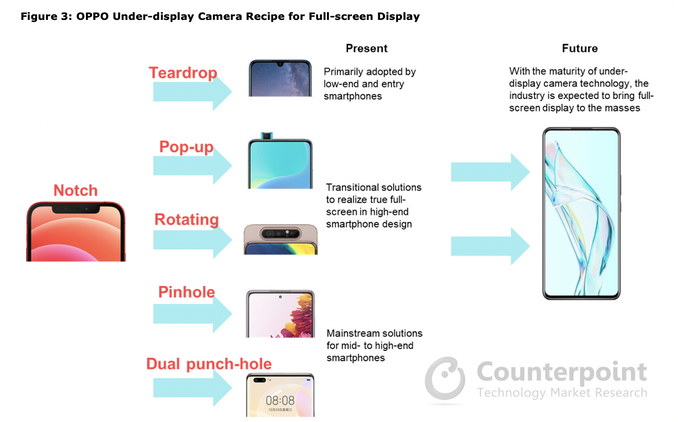 Although the front camera system with pop-up, rotating or sliding mechanics had emerged as a compromise solution to remove the cut-out, it is the under-display camera technology that represents the development direction of future full-screen display. A solid foundation is being laid for the increasing adoption UPC technology by smartphone OEMs Xiaomi, Samsung, ZTE, vivo and OPPO.”
However, large-scale commercialization of under-display cameras still faces challenges, which make its mass-market penetration difficult before 2023: 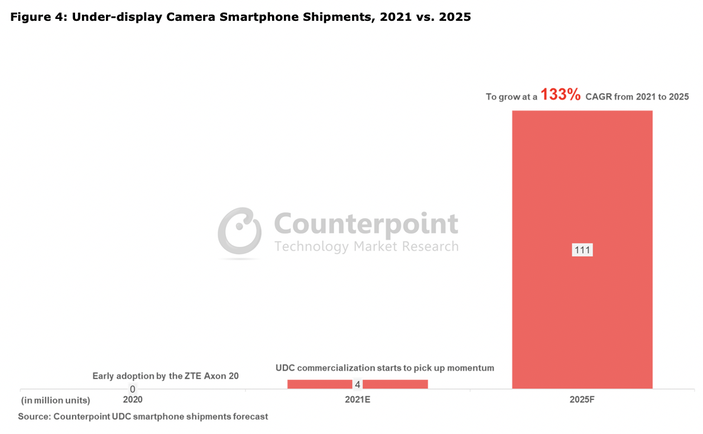