Vertical Divider
UDC Great Quarter and Year, Challenging Q120 and a Future that Could Under Underperform the Industry
March 2, 2020

Source: UDC Company Financial Reports
​
UDC revenue is closely aligned to the shipments of OLED panels and the changes in material revenue would normally be expected to parallel OLED substrate starts as measured in sq. m of glass to take into consideration yields and utilization. However, unlike the panel shipments, material revenue has variants beyond pure substrates starts (measured in sq. m):

In the past, these factors contribute to a mismatch in UDC material revenue and area shipments as shown in the next chart.

​Source: UDC Company Financial Reports
The OLED Association cooperates with DSCC on a quarterly report calculating the material consumption and revenue of all organic material used to produce active matrix and passive matrix OLED displays and lighting. The report shows the stack and material thickness (layers) of every OLED manufacturer and the material revenue is calculated using quotes from a number of sources on the price per gram of each material layer. An example of the stack for Samsung FMM process is shown in the next chart.
​
Figure 3: OLED Panel Stack for Smartphones Using FMM ​ 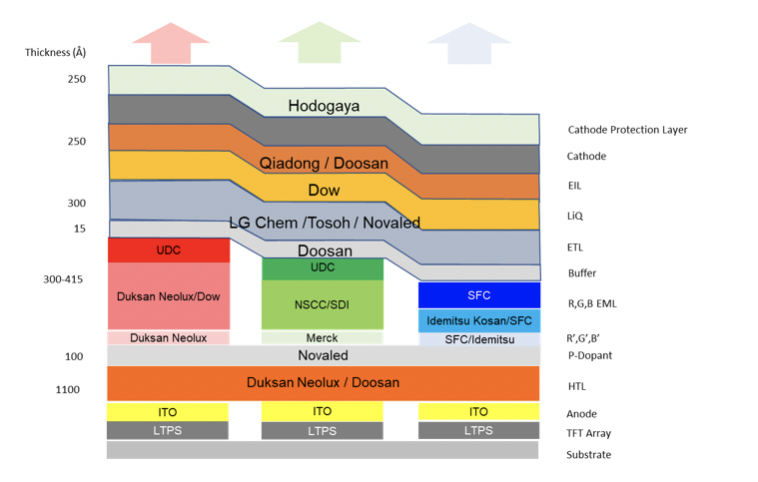 Source: UDC Company Financial Reports, DSCC, OLED-A
​
As anticipated the differences in revenue are relatively consistent with the chart comparing UDC revenues and area shipments. For both red and green the plots diverge in Q1 and tend to merge. However, under ASC 606, which is GAAP accounting and was recently adopted by UDC, material revenues are based on an average selling price, which is what the DSCC model uses, so the prior swings due to product mix are less of an issue as demonstrated by the alignment of Q3 and Q4 revenues in the previous charts.

For 2020, DSCC forecasts mobile, TV and Other OLED panel in terms of panel revenue and sq. m, based on substrate starts. 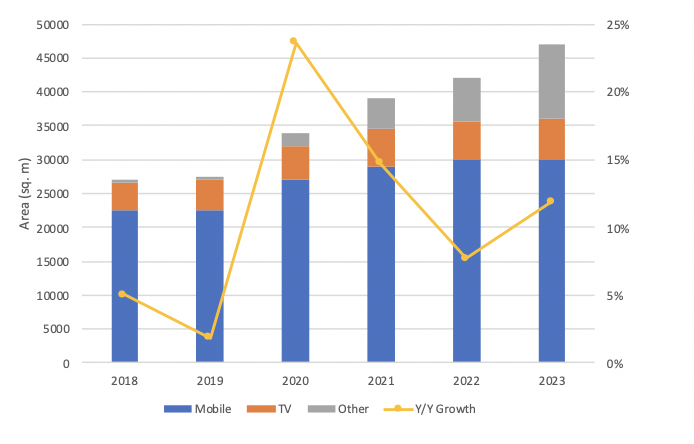 Source: DSCC
In Q120, the smart phone markets are expected to be affected by the COVID-19 virus:
The net impact of the COVID-19 virus is therefore a drop of 20m smartphones vs. the forecast in Q120, which shouldn’t materially impact UDC’s revenue, given a base of  120 to 130m OLED smart phone panels forecasted prior to the virus.

For the year, we expect OLED panel shipments by application:


If the COVID-19 in China continues to recede, the 2020 impact on UDC should be minor, although there may be some inventory build-up in the 1st quarter as production will be down and it could take 2-3 quarters to recover.

Looking beyond 2020, UDC should continue to grow in parallel with the OLED industry with the following variances: 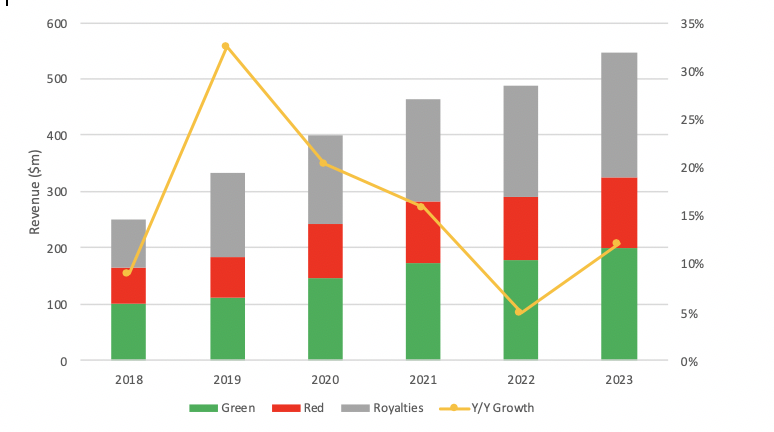 The next figure compares the forecasted growth in shipments and area with our calculation of UDC revenue for 2019 thru 2023. It shows a CAGR of 28% for revenue and 29% for area vs. 13% for UDC revenue.  The slower growth for UDC is primarily a function of not keeping up with the OLED TV panel production. 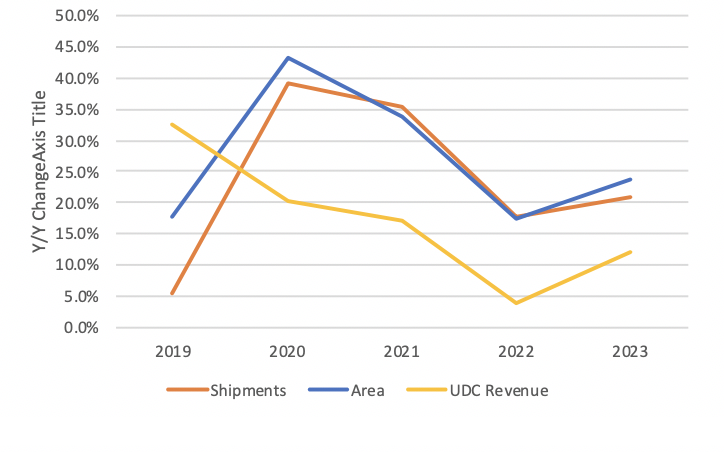 Source: UDC Company Financial Reports, DSCC
UDC often cites OLED lighting as future source growth path, however, the volume is so low that it does not have a material impact on total revenue. It is unlikely that it will impact the future as the few OLED lighting fabs are Gen 2.5 and smaller.  The one opportunity for growth was the Gen 5 OLED lighting fab that LG started but has since shuttered and at this point there are no known plans for constructing larger fabs.