A UDC team created what they called a Nanopatch antenna, not because it has anything to do with broadcasting or receiving signals of any kind, but because the particles they added to the OLED stack act like an antenna, pulling out those ‘light particles’ that normally would build up and cause the OLED materials to ‘age’ inconsistently, causing the dread ‘burn-in’.  By attracting these plasmons with a combination of a typical phosphorescent emitter, with TADF host, and the silver nanoparticles, UDC researchers doubled the stability of the stack at the same brightness and increased the light output by 16%.

Nano-sized particles are coated on top of CPL to maximize the light coming out from the device, but the technique does not produce the uniform thickness displays require for a straight light from the device surface as collimated as possible to maximize the resonance effect, but these particles will scatter the light. This technology might be suitable for lighting applications, but it won't work well for displays.

Figure 2: 3D Schematic of Plasmon NPA - The Host and Emitter Structure, And Micrograph of The Silver Nanocubes – 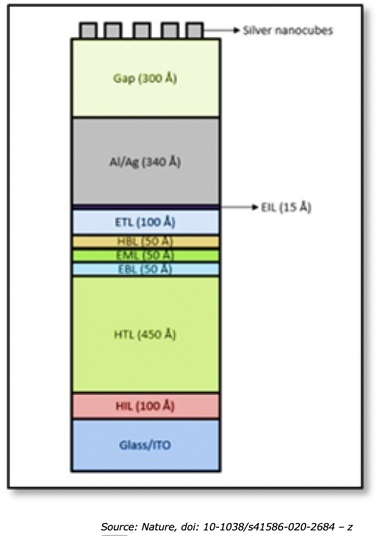