​In 2021, Samsung is expected to release a new Galaxy Z Flip 2 and a Galaxy Z Fold 3 models, but according introduce a more budget-oriented Galaxy Z Fold Lite. This isn’t the first time the ‘Lite’ foldable device has been reported as being planned by Samsung for 2021 but so far, the rumors are mixed. Some claim Samsung will be launching a Galaxy Z Fold Lite next year, while others expect  that the budget variant will be a clamshell. UBI Research says, Samsung’s budget-oriented foldable will be a Galaxy Fold, not a Flip. They revealed a couple of specs pertaining to the Lite model’s displays. The so-called Galaxy Z Fold Lite will supposedly have a 7-inch foldable panel and a small 4-inch cover display, which the Galaxy Z Fold 3 is said to share the same characteristics. Samsung will take a step backwards with the full-fledged Galaxy Z Fold 3 by equipping it with a smaller 4-inch cover display. The 4.6-inch cover display of the original Galaxy Fold was the phone’s biggest weakness in terms of user experience and usability, and Samsung acknowledged this when it released the Galaxy Z Fold 2 with a larger 6.23-inch cover display so UBI’s report should be questioned. Improvements such as the UDC selfie camera which will, and an integrated S Pen are improvements. Samsung is expected to shrink the Galaxy Z Fold 3’s cover display, it will do the exact opposite for the upcoming Galaxy Z Flip 2. The ongoing Galaxy Z Flip has a 1.1-inch display that provides quick information at a glance but the Galaxy Z Flip 2’s external screen will supposedly have a 3-inch diagonal. Such a revision would drastically change the way users interact with the Galaxy Z Flip 2. A larger 3-inch display would certainly be a better match for One UI 3’s new lock screen widgets, and it should enable users to perform more tasks without having to flip open the phone. Samsung hinged devices of the immediate future will still have external displays. For example, a recent tip points to a Galaxy Z Fold3 with a more compact 7-inch main display and a 4-inch secondary screen. Furthermore, there may be a "Z Fold Lite" - possibly the long-awaited first-gen "affordable" foldable from this OEM - with the same dimensions, although its own primary screen may have a more fragile CPI coating rather than the UTG (a protective layer for this foldable's new and supposedly ultra-thin LTPO TFT panel) expected for its putative flagship counterpart.  Finally, the second-gen Galaxy Z Flip is now projected to remain on 6.7 inches for its own flexible display, although a larger 3-inch panel for its exterior surface may be in the offing. This new clamshell is expected to debut in the third quarter of 2021, as will the "Z Fold3", whereas the Z Fold Lite may make it to the market within the first 3 months of the same year. Previously, we reported that  an inward tri-fold, which folds at 2 points rather than down the middle is being considered. The advantages include 1 quad rear camera array per device, as two-thirds of their single display can act as the "selfie screen" for this use-case and a bigger unfolded screen.  But it will come at the cost of a heavier and thicker device. Samsung has only filed this new IP with the United States Patent and Trademarks Office (USPTO) in May 2020, it may be some time before it takes over for the next kind of Z Fold or Flip hinted at in Samsung's latest trailers.
Figure 6: Samsung Foldable Concepts 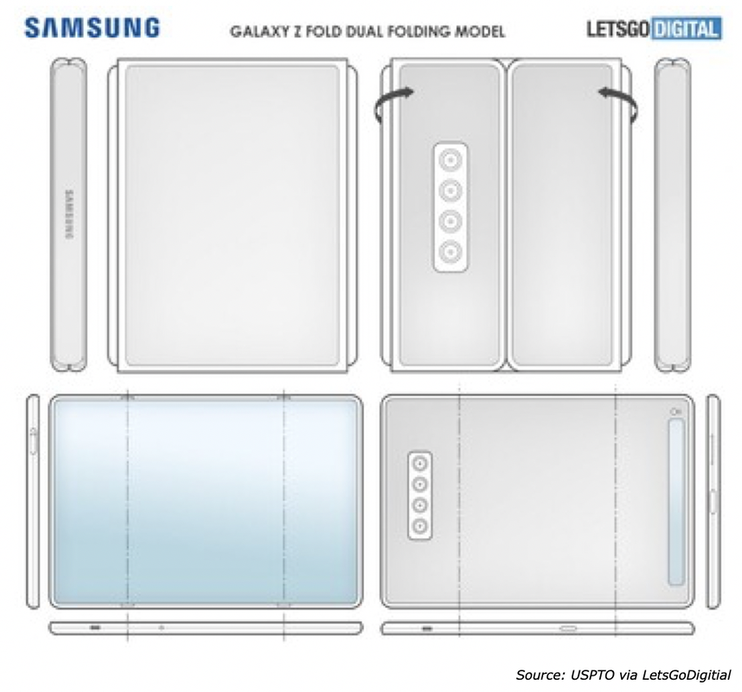 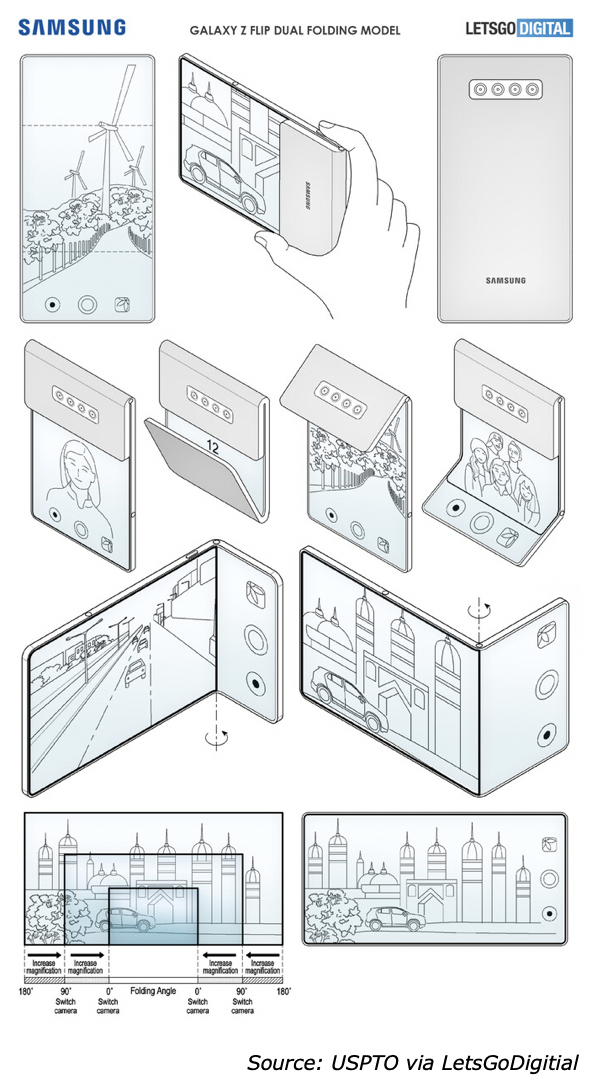 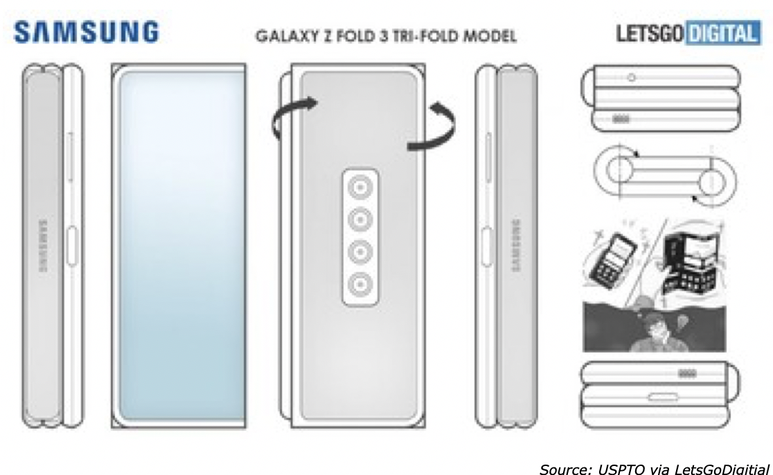 ​The "new Z Flip" may still unfold vertically, whereas the re-imagined "Z Fold" does the opposite.