In July, UBI forecast that CPI would outsell UTG in the next two years.

UBI  “... shipments for the CPI films and UTG will reach 4.5 million units and 3.5 million units, respectively, this year. The firm predicts that both the materials will grow in the next 5 years.”

That forecast disagreed with the DSCC forecast, which we agreed with that UTG would be the primary material used for the cover lens in foldable displays. Now UBI says UTG will account for 80% of all over windows used in foldable panels going forward.  CPI films used by non-Samsung panel makers will account for 20% of the total for the next five years. UBI says that  CPI films will be useful for budget models or those with over 10-inch screen sizes. BOE and CSoT currently use PI films but they are collaborating with glass companies to secure technology in UTG. 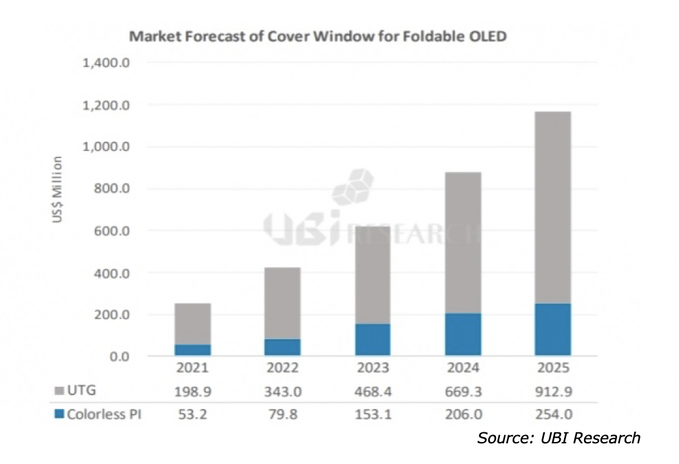 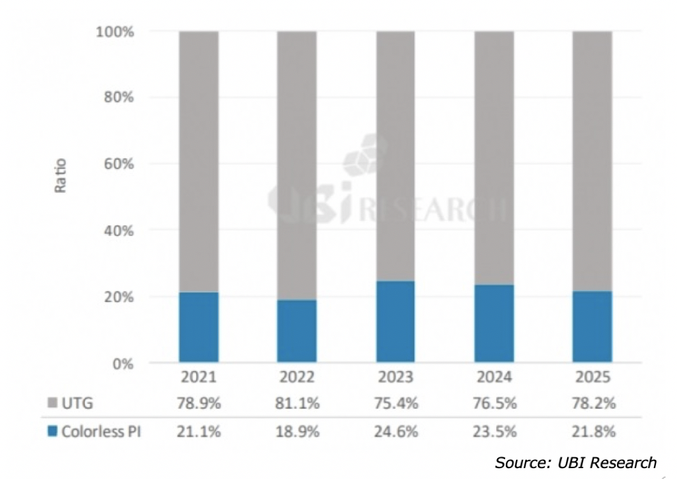 Transparent polyimide (PI) film product developed by Kolon Industries has been used for the world’s first foldable laptop. Kolon Industries, a chemical and material affiliate of Kolon Group, announced on April 5 that its transparent PI film, dubbed “CPI Film,” has been used as a cover window for the world’s first foldable laptop “Thinkpad X1 Fold” released by global computer giant Lenovo. The new product is a highly functional transparent polyimide film developed by Kolon Industries. The company succeeded in volume production of the film for the first time in the world in 2019 and registered its trademark. It is transparent like glass but does not scratch when folded, so it is mainly used as a key material for next-generation displays, including displays for foldable devices. Unlike regular PI films, it is possible to apply it to the surface of a foldable display because it is transparent. It can withstand high temperatures of more than 400 degrees Celsius and low temperatures of minus 269 degrees Celsius. The new product is thin and flexible and can be freely applied to designs of various sizes. The company say it requires high-level production techniques.
​
Kolon Industries has been supplying CPI Film to many global display companies. Until now, it has been used for foldable phones only. The Lenovo X1 Fold which uses CPI Film for the first time is a premium foldable laptop with a 13.3-inch screen that can easily fold and unfold. The laptop is characterized by its touch pen. Thanks to Kolon Industries’ CPI Film, it could use touch pen technology which has been difficult to use for thin-film glass cover windows. The Lenovo X1 Fold first hit the North American market at the end of 2020 and has been selling in Korea since February.

Display Supply Chain Consulting (DSCC), a market research agency, predicted in a market research report in 2020 that the foldable display market will continue to grow at an annual average of 131 percent over the next four years. The foldable display market is expected to grow from US$22.2 billion at the end of 2021 to US$105.3 billion in 2025. If foldable displays are applied to medium-sized and large products with screens more than 10 inches such as tablets and laptops, their size will shrink when folded so they will be more convenient to carry. Kolon Industries is planning to expand its use of CPI films for other devices as well. The company is also planning to preoccupy the market of films for medium-sized and large-sized foldable displays beyond the market for those for mobile phone displays. Kolon Industries is planning to develop and supply materials optimized for various devices such as medium-sized, large, and rollable devices by establishing a close collaboration system not only with Korean companies but with global display giants.