Vertical Divider
TVs Reaching Maximum Comfortable Luminance
​
TVs are cranking out 300 -1000 cd/m² APL and with a maximum for HDR at 2,000 cd/m² and projectors up to 50K lumens, while small pitch LEDs can put out 3,000 cd/m². The HPA (Hollywood Professionals' Association) Tech Retreat and Pete Putman responded with the question, "Can a Display Be Too Bright?" Then he asked, "Should we be focusing on screen contrast, instead?". He highlighted that, in the past, CRTs were just around 100 cd/m² and cinema screens struggled to hit the SMPTE recommendation of 16 ft-L (55 cd/m²).  Pete Putman provided a number of AV industry "rules of thumb" for CR:The 'black' level in the room is set by ambient light and so the light target is the black level multiplied by the contrast ratio desired. Light meters work in lux, rather than lumens, so for calculation, multiply the lux by the screen area (in sq m) and provided the following calculation for a classroom:
Figure 1: TV in Fully Lit Room 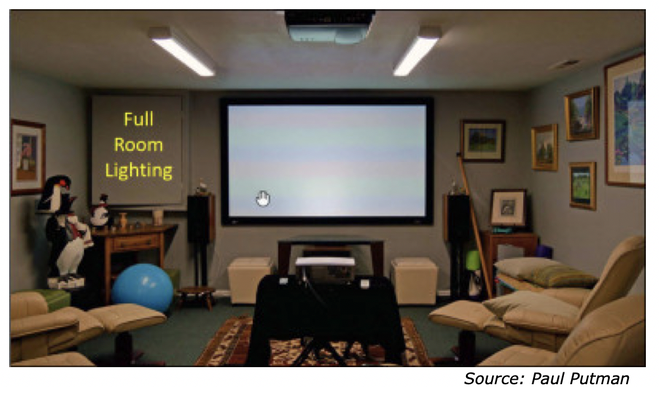 The measurements of the black level and the brightness of objects varied a lot between the three lighting situations.  The first column shows measurements with all the lighting on, the second with the front lights off and the right with all off.

Putman then went through the calculations to show that what he measured matched what he would expect from the projector but couldn't quantify the limiting contrast ratio as the meter he was using could not measure the darkest regions. However, in the darkest setting, the image was good enough for viewing. Switching to a newer brighter projector (from BenQ) was a lot brighter when the lights were on but didn't improve the lights were off as there was a lot of reflection from the room.

The results show the BenQ W1500 projector is a lot brighter at 1300 lumens and the full white has much more luminance. However, the limiting contrast is 51:1 because of the reflections, which is good but not great. A darker room is needed with viewers with darker clothes. 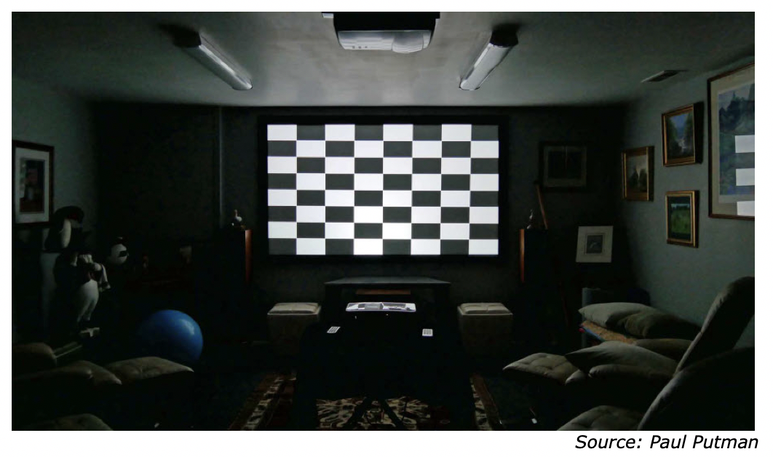 ​The BenQ projector may be brighter than the old one, but the light from the screen cause the room surfaces to be more obvious. Milliken said that 50 ft-L (171 cd/m²) is a practical upper limit for displays in a darkened room, but Putman thinks this may be too bright. He attended a test of a 3.3mm pitch LED wall in a large theatre that had 200 cd/m² (58 ft-L) full white, but some viewers, well away from the screen, thought it was too bright for comfort.

Putman’s LG OLED is around 130 cd/m² (38 ft-L) when ISF calibrated, and in daytime provides 2:1 to 10:1 contrast which is comfortable. However, at night, it lights up the whole room but at about 65:1 limiting contrast ratio - good but not perfect for immersive viewing.

LEDs are already moving into cinemas. However, even 'throttled' back, with HDR content, on-screen brightness was up to 200 cd/m² and the whole cinema was 'lit up'. It did make it easy for staff to deliver food and drink, but the trainers on one viewer (shown in the image below) measured 10 ft-L!


Source: This material was excerpted from an article in Display Daily.