Early reports on YTD TV shipments thru Q320 were up ~6% and 3Q was among the strongest ever. TV shipments growth is coming from  North America, with the only other region having positive Y/Y being the Mid-East/Africa region. The report is from a single source (AVC Revo). 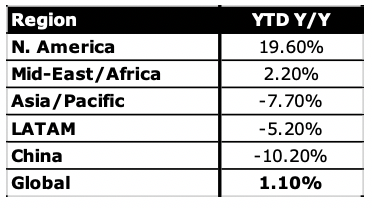 ​Source: AVC Revo
Samsung remained the #1 TV brand and was up 16% Y/Y (YTD). LG TV shipments declined 7% over the 3 quarters, OLED TV shipments increased by 11.5% as the company increased OLED TV capacity.  The top five TV brands shown below accounted for just under 60% of global cumulative TV shipments this year.

Source: AVC Revo
TV panel prices in November have been up between $2.00 and $8.00 and recent reports that TV set prices are growing have been demonstrated in Japan with increases ranging from 3.1% to 4.5%.