TV makers expected to boost their display panel purchasing in the second quarter but are instead lowering expectation due to COVID-19. . South Korean and Chinese TV makers were hoping to take advantage of improving panel availability conditions in the second quarter to build up their inventory in advance of increased consumer demand. China’s top-tier TV makers currently are expected to increase their unit purchases of display panels by 5 percent sequentially in the second quarter, following a 6 percent decrease in the first quarter. However, these plans are now in serious doubt. “TV makers had been anticipating increased demand later this year, with consumers set to purchase new sets in advance of upcoming sporting events, such as the 2020 Summer Olympics in Tokyo,” said Deborah Yang, director of display supply chain at Omedia, but the Olympics have been postponed to 2021 at least. As a result, TV makers need to revise their purchasing plans to accommodate potentially drastic changes in the level of demand.” TV set makers must determine how much European demand will be affected during the months of May and June and during the entire third quarter. As a result, April will be the first month where “normal” could occur.

Most Chinese TV makers had reduced their inventory levels by the end of 2019, and had planned to replenish their stockpiles in the first half of 2020. TV makers all sensed that panel supply would be tight in 2020 due to reduced production and the impact of coronavirus on manufacturing in China in February. In the second quarter, supply conditions had been expected to improve, as China began to manage the crisis more effectively. Moreover, the demand situation was looking up, with demand in North America remaining solid, according to a sales forecast from regional retailers, as reported by the Omedia TV Display & OEM Intelligence Service. 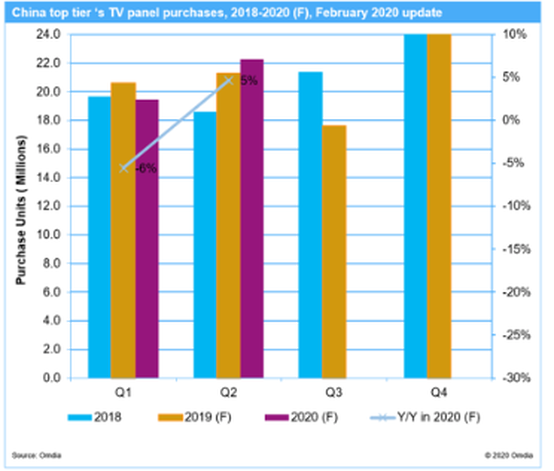 Source: Omdia
Korean TV brands are moving more confidently to mitigate supply-chain disruption risks compared to their rivals from other regions and are increasing panel demand in the first quarter to bolster their stockpiles. Korean TV brands have aggressive shipment plans for 2020 to maintain their revenue and profits. However, the unexpectedly fast spread of the coronavirus—particularly in European countries—now is attracting the intense attention of the Korean TV brands that have a major presence in the region. Omedia believes these companies will have to cut panel demand in the second quarter to reduce the risk of rising inventory as more and more cities and countries go into lockdown.  TV panel prices are set to fall in April as global demand is expected to contract significantly in the wake of coronavirus pandemic, particularly in the US and Europe, according to industry sources. Overall demand for TVs will remain lackluster in the first half of the year, and whether TV demand could pick up in the second half will depend on when the virus can be contained, added the sources. According to China-based Sigmaintell Consulting, global TV shipments could be down by eight million units or 3.3% Y/Y in 2020.
32-inch TV panels are expected to fall US$1 to US$37 on average in April, and those for 39.5- to 43-inch models will also edge down US$1 to US$65. Prices for 50-, 55-, 65- and 75-inch panels are expected to remain stable at US$90, US$114, US$178 and US$291, respectively, in April according to Sigmaintell.
​
Anticipatory changes in worldwide TV set shipment expectations are already showing 5% and 10% under 2019, a year that saw nearly a 2% shipment reduction vs. 2018, although those most optimistic focus their attention on the large-size TV segment (65” and above) where growth has remained intact.  The problem with this segment is it is the one where the most competition will likely occur this year, even after the capacity reductions (Gen 8) by Samsung Display and LG Display. Chinese panel producers have expanded capacity for ultra-large panel production and that capacity is going to fight for every 6%”+ set to be made.  How the Central Chinese government is going to incentivize that group to play nicely with each other is a question we cannot answer, especially with the local governments, who have actual stakes in such companies, pushing for higher utilization rates, both for their investment and for local employment levels.