Panel producers have capitalized on “stay at home” demand  and shifted production away from TVs toward IT (NB and monitor) panels, which has eased shortages for notebook and monitor panels and stabilized panel pricing for those items, and sent TV panel prices up. Monitor pricing is expected to remain flat in July, with Notebook pricing rising between 0.2% and 0.6%. Some of the earlier TV panel price increases were caused by the announced exits of SDC and LGD from the LCD TV panel market. While demand remained relatively weak, the fear of being caught without adequate panel supply began to move the needle from a buyer’s market to a seller’s market in late 2019 and early 2020.

TV shipments, which averaged down ~2m/month during the last 4 months of 2020, were down only 100K in May signaling that the market could be in the throes of a recovery. Discien, a DSCC distributor released its Monthly Global TV Shipment Report covering TV shipments, which were up ~30% sequentially to ~13.6m units. For the first 5 month of the year, TV shipments were 61.2m down 11% Y/Y.  China remains the leading region, followed by the US and Asia Pacific. 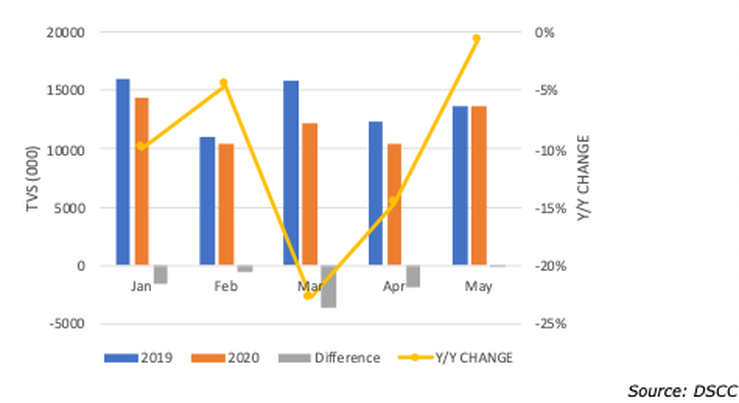 While TV panel prices continued to rise through March; April and May saw a decline as demand from consumers who were in quarantine or lockdown dwindled, but TV panel prices rose again in June and are expected to rise again this month.  Early indications expect a ~5.4% increase in TV panel prices in July as TV brands begin to build panel inventory for the holiday season, which unofficially begins in 144 days (Black Friday). With most TV brands seeing 1H targets fall short by 10% to 15% and full year targets down between 7% and 12% brands plan for a robust 2H.  Typically (5 year average) TV panel shipments are ~3.8% greater in 2H than in 1H but TV shipments are almost 13% greater in 2H than 1H and with the ~ 11% 1H shortfall that gap would have to be even larger than the average year.

Based on the July estimate for TV panel pricing, TV panel pricing is ~10.1% below last year’s peak but certainly better than the last two months, and while the large panel segment of the panel space has been able to grow sales by ~4.1% thus far in 2Q, expect another growth month for large panel revenue in June and July. 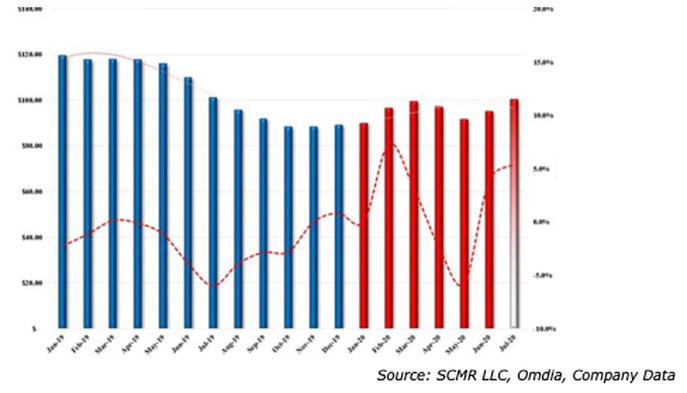