Consumers have been trained to expect Y/Y price reduction in TVs and that condition has spurred demand. TV brands have concealed price increases with new purported technology advances, such as higher resolution, HDR, and Smart software. But the consumer has been trained to expect that TV prices will come down. Well that’s all changing.

Over the last 22 months, LCD TV panel prices have varied by ±20% from the average ASP as shown in the next chart. Since the panel makes up ~ 2/3rd of the BOM of a TV, and TV profit margins are <10%, the change in panel prices  has caused TV OEM’ s profit margins to vary radically. Given the competitive environment with 4 to 8 brand in every regions, TV prices were relatively flat during the price downturn increasing OEM profit margins, but the recent upward trend in panel prices is causing a change in TV pricing. 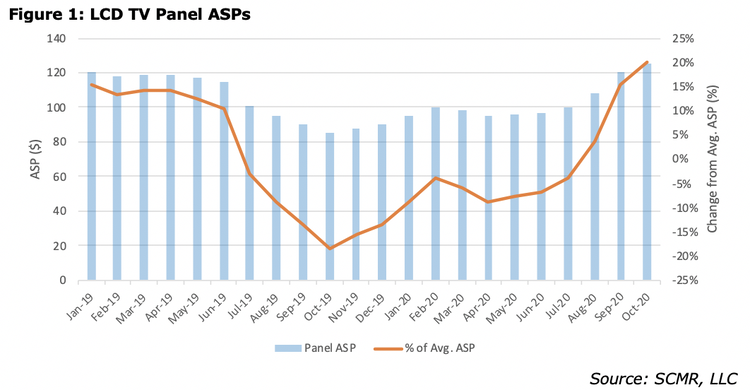 ​A number, if not all of the major on-line Chinese TV brands have raised TV set prices or are about to.


Chinese brands, seeing the rise in panel prices, the rising value of their inventory, and the fact that they have had to raise set prices rather aggressively, would think about whether they need to continue to build inventory as aggressively, but that is not the way CE brands think in China. They focus on having sufficient inventory to meet goals set at the corporate level, which is the reason that panel price volatility exists and why the TV space is a cyclical or mini-cyclical business.  The lag time between placing a panel order and a set being delivered to a retail location is too long for JIT and variables like changing tariffs, trade restrictions, component shortages, and shipping delays make things even worse. Whether high-level AI systems will be able to anticipate demand based on minute-by-minute POS and sales data and coordinate that with similar inventory and manufacturing data, could ameliorate the approach, but does not seem likely given the current conditions.