Vertical Divider
The Unintended Consequence of Micro LED TV Technology --The Smaller the Size, the Higher the Cost

Samsung Electronics delayed the launch of its 99-inch μLED TV launch, because production cost increases as the screen becomes smaller. Samsung uses Micro LEDs that are 50x20um and inserted onto 9.7-inch PCB modules. A display can be made without size and shape restrictions by connecting the modules as long as it fits the 9.7” module scheme. Samsung Electronics said it would release a 110-inch μLED for home use at the beginning of this year, and that it would release the 99-inch model in the first half of the year and the 88/76-inch model within the year. However, the 99-inch model has not yet been released. Samsung Electronics explains that “there is a lot of demand for 110-inch micro LEDs, so we are responding first”, but the reality is that the 'price' is the main cause of delays in the launch of new micro LED products.


In order to make a small product while maintaining the same resolution (4K level) as a 110-inch micro LED, more than 24m chips must be transported to a smaller PCB like a 110-inch product. The pitch becomes tighter, and the yield is reduced. The cost increases when the number of repair processes to replace bad sub-pixels increases. With a 99.9% yield, 25,000 μLED chips must be replaced. Therefore, the price of the smaller product is higher than the larger product, so Samsung Electronics chose not to launch the smaller product. It is the reason that ultra-large products over 100 inches came out first. Samsung Electronics introduced 'The Wall', a 146-inch commercial micro LED in 2018, and a 110-inch micro LED for home use last year. The market is quite small as Samsung Electronics' commercial (B2B) and household (B2C) μLED product shipments are projected at 400 to 500 units, up from 100 last year.

In the future, Samsung Electronics plans to reduce the micro LED process step by applying 'R (Red) G (Green) B (Blue) One Chip' transfer technology. RGB one-chip transfer refers to a technology that implements RGB on a single chip. In the past, 'RGB individual chip transfer' was used to transfer individual RGB pixels to the substrate. When RGB is made into one chip, the chip size is larger than that of conventional RGB pixel chips reducing the number of transfers by 2/3rds, which could improve the yield. The number of repair processes can also be reduced, thereby lowering product cost. In addition to the RGB (3) one-chip method, Samsung Electronics is also known to be reviewing the 'RGBRGB One-Chip' (Multi Die) technology that makes RGBRGB (6) into a single chip. 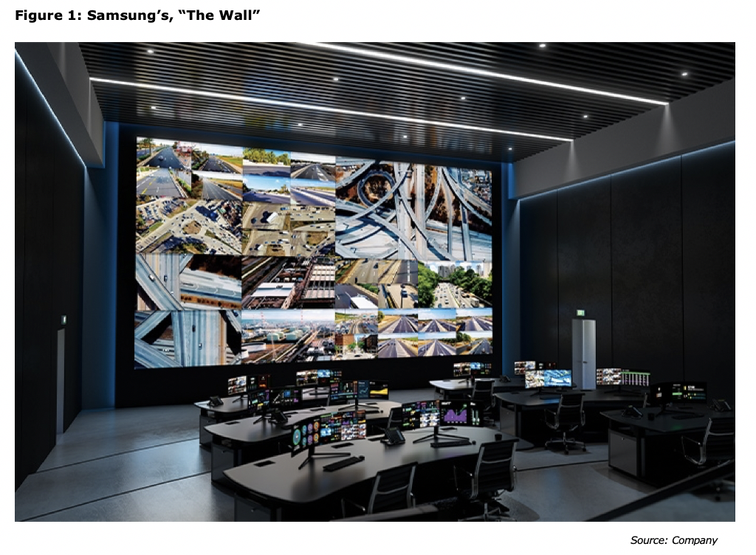 ​Samsung Electronics placed an order for micro LED equipment from its partners in the first half of the year, but that order was placed 1-2 months later than expected. These devices are for micro LED products to be released next year. The company is building an assemble process for its 110’ TVs in Vietnam.

By using 20μm LEDs, in their Crystal TVs, Sony is likely avoiding the issue. 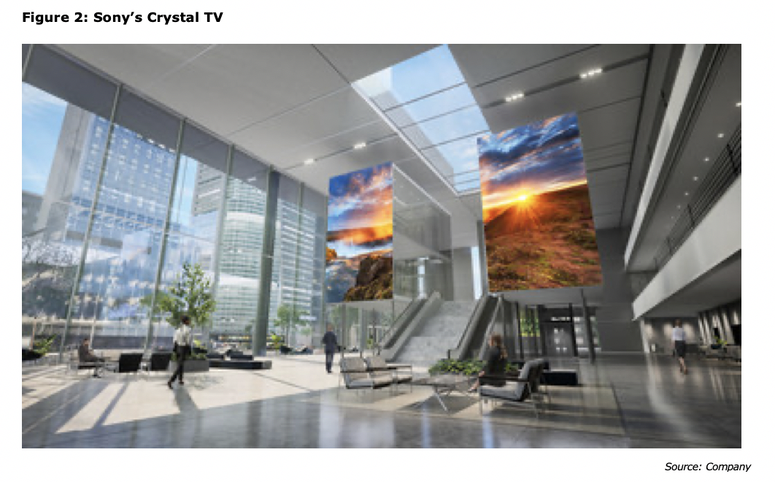 In addition to Samsung and Sony, other companies are hoping to enter the space:

The emergence of virtual productions like those popularized by Disney's The Mandalorian have given display giants a new niche for their massive screens. Sony, which boasts a movie production arm, is already using its modular crystal LEDs to provide backgrounds for shoots. Now, Samsung is getting in on the act through a new partnership with major Korean movie and TV show producer CJ ENM.
The pact will see Samsung provide its massive MicroLED TVs, known as The Wall, to the studio's virtual production facility when it opens in Paju, Gyeonggi Province later this year. CJ ENM previously struck a deal with Fortnite maker Epic Games to use its Unreal Engine game engine — which also provided the digital backdrops for The Mandalorian — for future projects.

Virtual productions are gaining traction in global filmmaking. The technique involves the use of LED stages, game engines and VR to create and control computer-generated backdrops. Currently, the massive investment has limited the tools to blockbuster shoots, but industry insiders believe that could change as people realize the savings, they bring on crew travel and physical sets and infrastructure. As a result, virtual production is expected to become the norm in filmmaking within five years, according to an industry report by the Göteborg Film Festival.
​
Samsung says its latest screens will deliver improved visuals thanks to their support for HDR 10+ and optimized frame rates such as 23.976Hz, 29.97Hz and 59.94Hz. The company will install an oval-shaped main display at CJ ENM's new complex with a diameter of 20 meters and a height of seven meters or more. Samsung says its massive screen measures over 1,000 inches and supports up to 16K high-resolution content.

But the Korean company hasn't embraced virtual production quite like Sony. The Japanese conglomerate previously paid $250 million to acquire a minority stake in Epic Games. It also bought virtual production software maker Nurulize in 2019 and integrated it into Sony Innovation Studios, the state-of-the-art facility located on the Sony Pictures Studios lot.