Initially known for its smartphones that offered high performance for low prices, Xiaomi started pushing into more high-end devices three years ago, when it started to develop the Mi 10. The phone was released last year at a starting price of 3,999 yuan (US$617), its most expensive phone at the time. Despite the pandemic, Lei said Xiaomi has sold 5.77 million Mi 10 handsets as of this month, more than twice the company’s target of 2 million. The company has since moved into even higher pricing tiers with devices like the Mi 11 Ultra, which starts at 5,999 yuan in China. “Xiaomi’s high-end path is just beginning now,” Lei said at the three-hour event last Tuesday. “We will continue to invest at any cost.” However, he admitted that the company still has a long way to go, and that Xiaomi’s current priority is to cement its position as the world’s No 2 smartphone maker. Another part of its strategy to move up market is its more experimental  Mi Mix line of devices. The company’s latest version is powered by Qualcomm’s Snapdragon 999 chip and starts at 4,999 yuan. Other new products unveiled this week include a tablet, a smart speaker and a robot dog called Cyberdog. 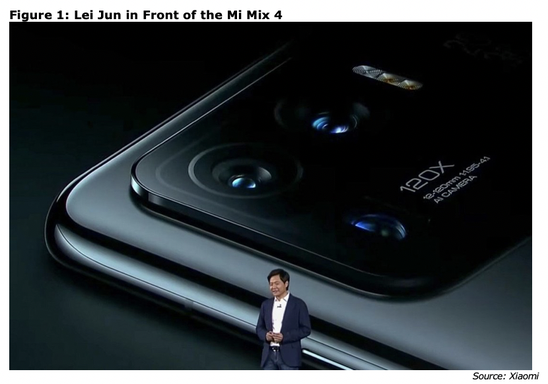 ​Founder Lei Jun said, “Xiaomi will be world’s top smartphone maker in three years”,
as the company announced the new Mi Mix 4. In the second quarter, Xiaomi topped Apple to become the world’s second-largest smartphone vendor with 17% share, according to research firm Canalys. By the end of 2021, Xiaomi is expected to trail Samsung by 6% in market share, after trailing up 12% in 2018. Xiaomi has a big lead in China, leads in India and Europe by small amounts and is hardly present in the US, Middle East/Asia and Latin America. As we reported recently, the Samsung Group leadership has finally recognized the market changes. 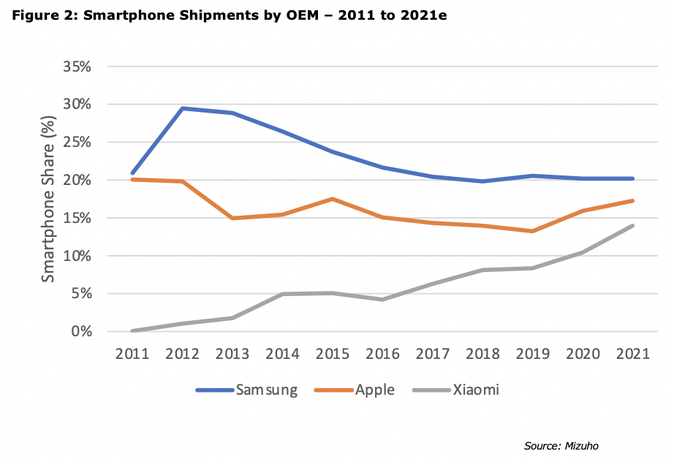