​“Flagship Killer” were targeted to provide the best, top-of-the-line SoC (usually from Qualcomm), complement it with other key advancements in RAM and storage technology, sprinkle it with a few other niceties as far as the budget allows, and deliver it at an affordable price tag of $300-$400 — that is a fraction of the price of other conventional and “premium” flagships. Flagship killers democratize flagship performance, a feature that used to remain exclusive to premium flagships, as they lowered the bar of affordability. But the original flagship killers were not perfect, and they had their own compromises — but the judgment on these compromises was not as harsh, as their affordable price tag shielded them from direct harsh criticism when compared against premium flagships. With a price of $300-$400, and the best Qualcomm Snapdragon SoC onboard, complaints were kept to a minimum

Flagships in 2020 -- While the definition of a flagship has remained constant over the years, the price envelope has expanded. Premium flagships cost as much as $1,400, due to the use of expensive build materials, better displays, better and more cameras, and an increased focus on the cohesive smartphone ecosystem experience. But, in 2020, the Qualcomm Snapdragon 865 has changed the equation

The Qualcomm Snapdragon 865 is the current flagship SoC from Qualcomm, incorporating all the latest and greatest in mobile chip technologies. Over the Snapdragon 855, the Snapdragon 865 boasts of 25% faster raw CPU performance, 20% faster graphics rendering, better sustained performance, 2x increase in AI performance, support for LPDDR5 memory, support for display with QHD+ resolution at 144Hz refresh rate, support for 8K @ 30fps videos, 4K HDR videos, support for processing images up to 200MP in size, and processing 64MP images with Zero Shutter Lag, and support for Wi-Fi 6 and Bluetooth 5.1. That’s a long list of new features, but it isn’t uncommon to see such additions on a YoY basis. This is a flagship SoC after all, and it needs to stay a step ahead of the flagships themselves.
What is uncommon, however, is the jump up to 5G network technology as a mandatory upgrade, and we see it in the form of the Snapdragon X55 modem support. The Qualcomm Snapdragon 865 does not include any modem, not even one for LTE, which breaks away from the convention of recent years from Qualcomm.

Source: ArsTechnica
Per ARS Technica, every OEM building a flagship with the Snapdragon 865 absolutely needs to purchase the 5G-enabled Snapdragon X55 modem as well, as there is no integrated 4G modem to fall back on to keep things cheap. But just including the X55 modem does not guarantee full spectrum 5G access either. The Snapdragon X55 5G Modem-RF system includes compatible hardware modules for sub-6GHz 5G. For mmWave, Qualcomm’s QTM525 or QTM527 antennae is also needed, likely in the multiples to keep things running seamlessly across phone orientations. OEMs have to purchase several new and expensive components to fully deliver on 5G.

Source: ArsTechnica
5G is causing prices of the phones to increase by approximately $200-$300 as described in Snapdragon 855-based 5G phones from OnePlus (the OnePlus 7T Pro 5G). But with mandatory 5G in 2020, the same situation is seen across the entire current generation of Snapdragon 865 5G flagships. Premium flagships in 2020 are much more expensive. Devices like the Samsung Galaxy S20 start at $999 and go all the way up to $1,399 for the Samsung Galaxy S20 Ultra; the OnePlus 8 series starts at $699, and goes all the way up to $999. The same trend continues across the board — Motorola Edge+ costs $999, Mi 10 Pro costs €999, OPPO Find X2 and Find X2 Pro cost €999 and €1199, LG V60 costs $800, and so on. Even the “cheaper” crop of flagships aren’t exactly cheap — the Realme X50 Pro costs ₹37,999 / €599, making it Realme’s most expensive smartphone yet. There are multiple examples at this point, and the general trend has been the same — the Snapdragon 865 with 5G is expensive, and phones will get unusually more expensive compared to their predecessors.

The outlier here is the iQOO 3, but it is an exception because of two reasons: one, it is the cheapest Snapdragon 865 device in the market right, and two, it is the only one that comes in a 4G-only variant as well. The iQOO 3 5G costs ₹44,990 (~$589) [launch price: ₹46,990 (~$615)], while the base 4G variant costs ₹34,990 (~$459) [launch price: ₹38,990 (~$512)]. The iQOO 3 managed to undercut the Realme X50 Pro in India at launch, but it could only do so by decoupling 5G away from the flagship experience. iQOO’s further price cut goes against all the indicators in the Indian market, due to more expensive smartphones because of GST changes. iQOO managed to decouple 5G away from the Snapdragon 865 — the iQOO 3 4G could possibly have 5G bands software-disabled using tools provided by Qualcomm — but IQOO explained neither the phone not its 5G-less variant. From a 5G plus Snapdragon 865 perspective, the argument continues to stand: Qualcomm’s latest SoC and the accompanying 5G hardware makes flagships more expensive than ever before, with a steep price jump. The blame also rests on the Snapdragon 865 by itself, as Qualcomm is selling this SoC to OEMs at a much higher price than its previous flagship chips. As POCO’s GM Mr. C. Manmohan recently said, Right now, all 800-series chipsets, are extremely expensive. And [the Snapdragon 865], being the first 5G generation, is just a lot more expensive. The 855 was launched with a higher price point and we expected that also to undergo some depreciation. But 865 has launched extremely high and now the transition from 4G to 5G is happening across the board. So, the depreciation the 855 should have seen did not happen.

The same report cites various sources and a rough estimate of the price per chip. The Snapdragon 845 reportedly cost manufacturers around $45 plus an additional licensing fee per chip. The Snapdragon 855 and Snapdragon 855+ cost $53 plus an additional licensing fee per chip. This price increase not only affected the price of the flagships released in 2019, but it also continues to affect the viability of flagship killers into 2020 as the chip has not depreciated as much as previous trends. Xiaomi’s CEO Mr. Lei Jun had commented that the Snapdragon 865 cost them about $70 on the Mi 10  — making it one of the biggest jumps in cost in recent times and one that directly contributes to a steep rise in flagship pricing. A teardown analysis of the Mi 10 from TechInsights pitches the SoC to be $81, while the modem costs another $26.50, and the RF component costs $33.50, equaling a cool $141. While this is an estimate from a teardown and can miss out on the benefits derived from factors-of-scale, it does make one point clear — the Snapdragon 865 is expensive, with a price increase greater than previous flagship SoCs. 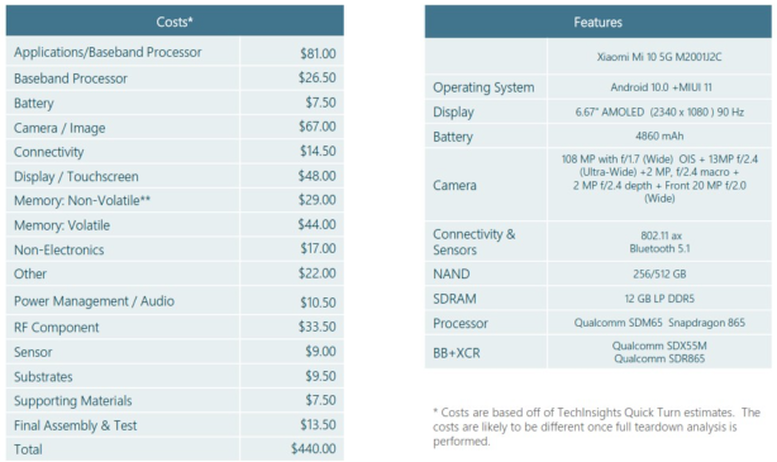 Source: TechInsights
Not only is the Snapdragon 865 more expensive, but it also requires other components and other changes that further drive up the cost. The discrete 5G modem and the additional multiple antennae require more space inside the phone. As a result, the phone body gets larger, the display gets larger, the battery gets larger, and OEMs have been throwing in larger and more camera sensors into the mix too, to make the most out of the situation. All of these cost money, and the consumer has to pay for it. Snapdragon 865 and Qualcomm’s monopoly in the upper end of the SoC market has forced “premium flagships” to evolve into “ultra-premium flagships”. OEMs are also incorporating more advancements in the display and camera segments, which exerts further pressure on this forced evolution. A price increase in this “luxury” segment is easier to digest keeping in mind that the target audience for these ultra-premium phones has a higher propensity to spend.
What isn’t easy to digest is the doom that the Snapdragon 865 spells out for Flagship Killers, as it hungrily devours the ~$400 budget as espoused in the community definition. There is just not enough budget left over for other components even if an OEM were to stick to a middling-quality level.
​
5G in no-5G Land. 5G comes with its own limitations and still has a long way to go before it matures and sees widespread adoption, and this is in the context of developed markets that have already jumped onto the train. Others have not yet taken the first steps to 5G yet. India, one of the biggest smartphone markets in the world, has yet to even begin spectrum auctions for 5G, let alone rolling out consumer infrastructure, and making 5G economically available to a population that loves its cheap and abundant 4G. Spectrum auctions were expected to be conducted in April 2020, but the poor health of the country’s telecom industry and the COVID-19 pandemic has put this on the back burner for the foreseeable future.
For India, mandatory 5G with the Snapdragon 865 was expected to make smartphones prohibitively expensive. But to bring some solace, the current releases are just mildly expensive and not prohibitively so. The OnePlus 8 series, with 5G support, launched in India lower than it did in the rest of the world. A similar story exists with the Realme X50 Pro 5G and the iQOO 3 5G. The lower cost of these phones could be that they are missing out on incorporating support for all 5G bands and restricting themselves to just a handful of probable ones, and thus, saving themselves on certification costs for the market. While these phones support 5G, they may not really support 5G in India. As the spectrum has not yet been auctioned in the country yet, certifying authorities should not have the mandate available to them to certify phones for usage in these scenarios, logically speaking. Certificates are issued after testing the equipment for safety by authorities such as Telecommunication Engineering Centre, and one can only wonder how phones already released would have been tested for safety on a spectrum that is not yet available for use in the country. Phones that are marketed as being “future proof”, are very likely subject to subsequent regulatory approval when the network finally becomes available.

There is also a point to be made about flagship killers being dead only temporarily. 2020 can be considered as the first year where 5G truly goes mainstream on smartphones, so there is bound to be a larger capital overhead to bear per smartphone. As costs to go down with the next generation, the next Qualcomm flagship could integrate the next Qualcomm 5G modem and lower down the costs from current levels. From: xda-developers