Vertical Divider
The Flat Panel Industry as it Enters Q421
​
Large panel capacity is up 5.7% Y/Y, due to the growth in China, offset somewhat by Samsung’s partial exit from LCD production.  Samsung’s large area display capacity share has dropped from 11% in Q120 to 0.6% in Q221. A major part of the change was Samsung sale of a majority interest in their Gen 8.5 fab in China to CSoT. Samsun’s new QD-OLED fab will hardly move the needle as it is only 30,000 substrates/mo.  BOE has the most capacity and their share went from 20.8% in Q120 to 25.7% to 20% by purchasing former rival CEC adding Gen 10.5 fabs.  CSoT also gained in share by taking control of Samsung’s China assets and adding  Gen 10.5 fab and is now #2 in capacity.

​The changes by fab for Samsung and LG Display are listed in the following table. 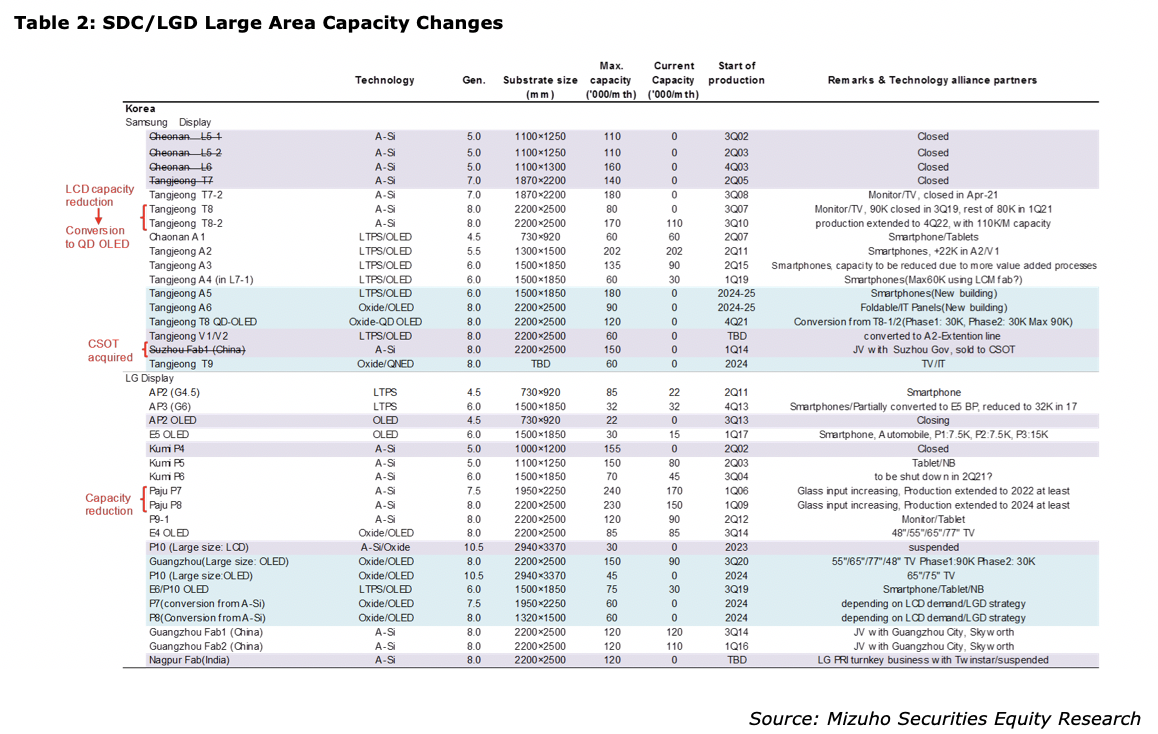 ​TV Set market leader, Samsung Visual Display will source ~13% of its demand from SDC in 2021. As TV panel prices come down, SDC is likely to shut down the rest of its LCD fabs, leaving it captive to the Chinese hegemony, until Foxconn’s (SDP) Gen 10.5 comes on-line. BOE, CSoT, CHOT, HKC are the top providers of TV panels providing 61% of TV set demand

​Unlike the mature LCD manufacturing process, where all fabs, large, medium or small use a top emission structure with color filters and either a-Si, LTPS or IGZO for backplane active material, OLED manufacturing is less consistent; medium fabs use a bottom emission model with no color filter, large fabs use top emission model and others use IJP to deposit the material in lieu of VTE. Moreover,  the active material can be LTPS, IGZO or a combination of both (LTPO). And Samsung is working on a Gen 8.5 with top emission and another Gen 8.5 with a vertically held deposition process. Samsung uses the top emission process as shown the next figure 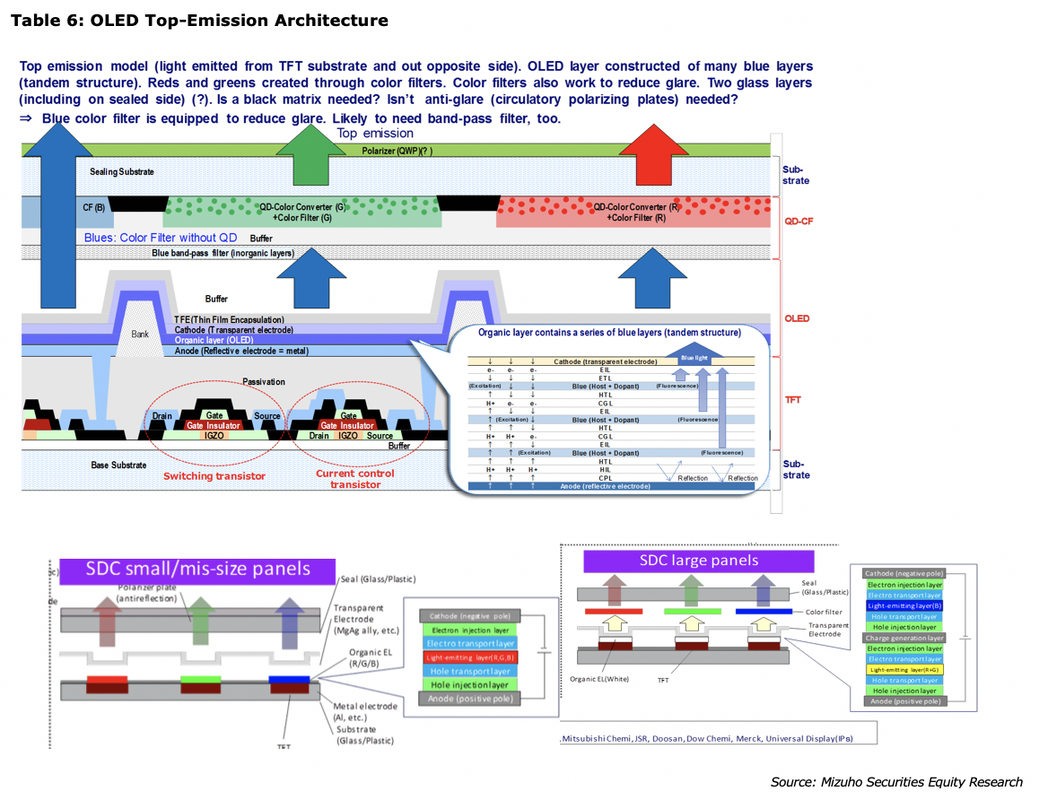 ​LGD has been using bottom emission for their Gen 8.5 fabs, where red, green and blue layers (unpixellated) are deposited, and then white light flows through a color filter (RGBW) to create the sub-pixels. The color filter is built into the active matrix as opposed to being printed on glass as typical for LCD panels. 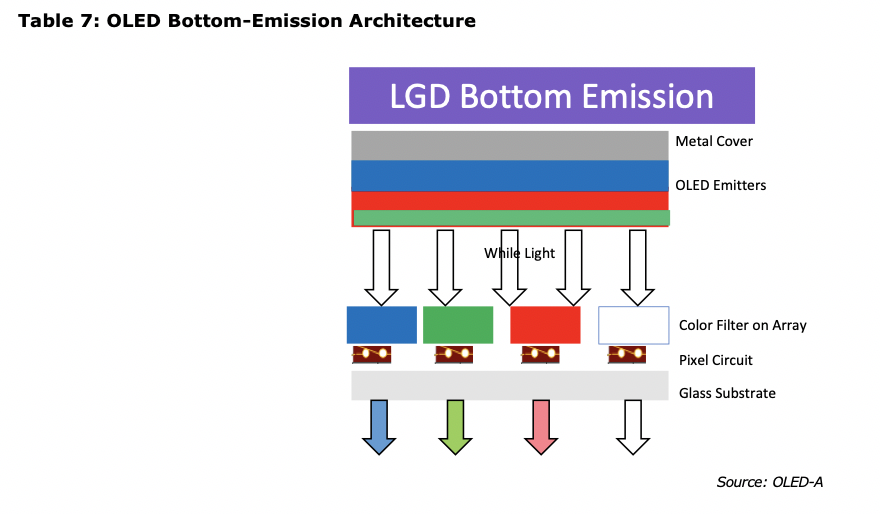 ​LGD is the only supplier of large OLED panels, so the OLED TV industry is totally dependent on them to be productive, technologically creative and financially secure. The company has suffered through losses form 2017 thru 2020 and is just starting to recover. LGD’s Fee Cash Flow (FCF) has risen to ~ $2B for the first half after  hitting a low point in 2018 when free cash flow dropped to a -$5B per year. The company’s debt-to-equity ratio, which reached a peak of 90% in Q121, has dropped to ~70% after a strong first half. LG needs $5-7B to build a Gen 10.5 fab, so lowering the ratio, which comes with increased FCF is a must.

In 2021, Apple became the leader in OLED display usage, and it will be sustained with the soon to be released iPhone 13 series and in the next 2-3 years. Apple incorporates the 6.7” size for the Pro and the Pro Max, a 6.06” in the basic model and a 5.42’ in the Mini.  These sizes are expected to remain the same thru 2022. OLED supply is ~70%  Samsung and LGD supply 70% and 28% respectively. LCD panels sourcing is moving almost completely to Sharp.
​ 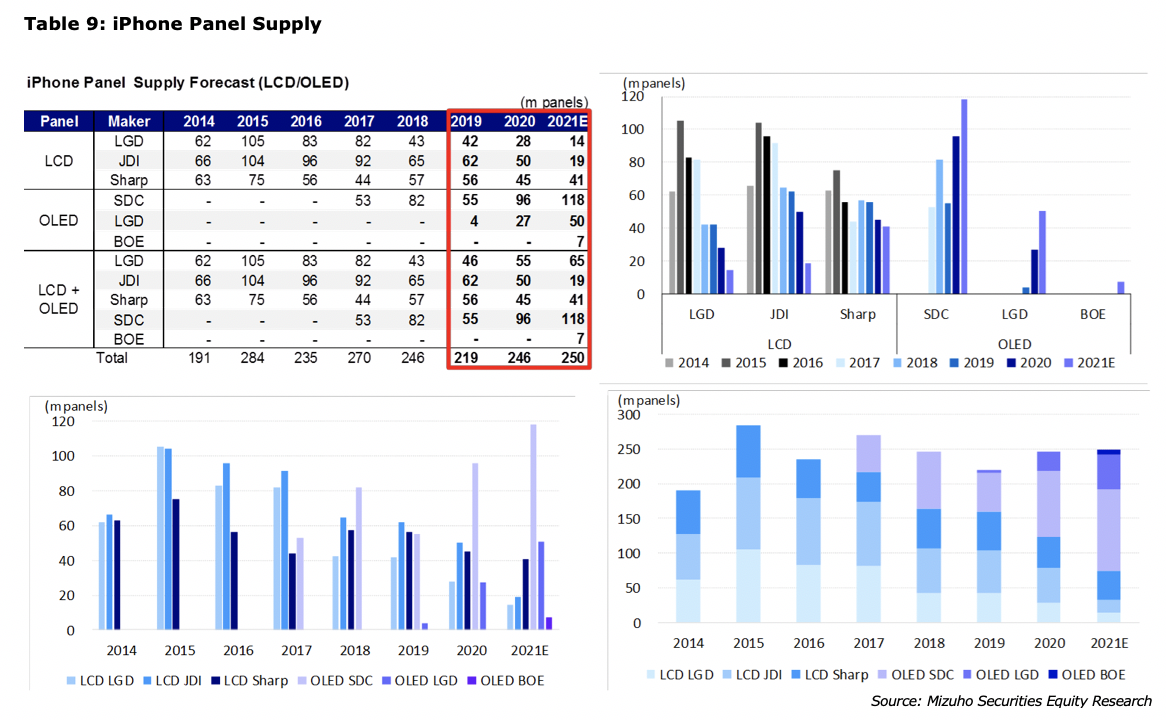