Following in the footsteps of the Omron HeartGuide, the BP Doctor Pro smartwatch uses a cuff that automatically inflates on the wrist to measure blood pressure. When not inflated, it looks like the average sleek and compact fitness tracker, and it's lightweight too (60g).The smartwatch collates maintains the data over a period of time for comparison purposes. It also packs a range of supplementary health-tracking features.

Unless its very severe, hypertension doesn't have any symptoms, which means a lot of the people who have don't realize (YHE Techs says that of the 1.1 billion people worldwide are suffering from hypertension, and over one-third are unaware).

Usually, a wrist-based monitor will only be used if it's not possible to use the upper arm. In order for the reading to be accurate, the arm and wrist must be at heart level – so the arm must be held at chest level  as shown below. But according to Mayo Clinic, even if the arm is positioned correctly, "blood pressure measurements taken at the wrist are usually higher and less accurate than those taken at the upper arm... because the wrist arteries are narrower and not as deep under your skin as those of the upper arm." 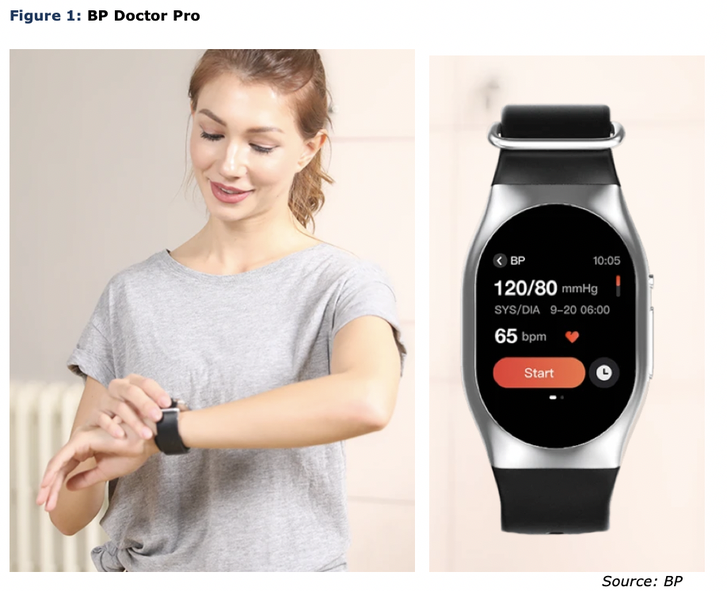 ​In terms of other features, the BP Doctor Pro also includes functions to measure HRV (Heart Rate Variability) – potentially an indicator of things like coronary heart disease, hypertension, and even heart failure – analyze sleep conditions and track fitness status including blood oxygen saturation. And it will keep on top of daily requirements via the ability to set reminders, alarms, and push notifications.

The wearable began life as an Indiegogo campaign, launched by YHE Techs in 2020. It raised over half a million dollars with more than 2025 backers. The BP Doctor Pro smartwatch is available to buy now at yhetechs.com, with an with an RRP of $399.