Vertical Divider
The Advent of 3D Cameras on Smartphones

Last year, select Samsung Galaxy phones began to include 3D depth-scanning cameras, a hardware feature with limited software support. A Samsung app called 3D Scanner lets a person move around a real object (such as a stuffed animal) to scan it into a 3D model, then translates a moving person’s 3D depth data to animate the model’s limbs. The concept wasn’t super practical, since it required the person’s movements to be recorded on the back side of the device, meaning the phone’s user would have to find someone else to “perform.” Samsung pulled the hardware from this year’s Note20 phones, reportedly after seeing that the Sony-developed Lidar 3D scanner found in Apple’s latest iPad Pros was on an entirely different level. Now Apple has added Lidar scanning to the iPhone 12 Pro and Pro Max, and though Apple itself has done too little to showcase the technology, Christopher Heinrich’s app Polycam impressively demonstrates what 3D scanning makes possible. Using Lidar and AI, a pocketable device can now effortlessly create 3D scans of both objects and entire environments — say, a room or multiple rooms in a house — that can later be viewed and moved through in three dimensions. As the images at the top of this article depict, you simply press a record button, then walk around the object or space as the screen turns from blue to white to indicate successful capture. Using Lidar for depth measurement and Apple’s processor for rapid recalculations, Polycam’s triangular mesh is refined in real time to more properly reflect contours in nearby and faraway objects, while the camera fills texturing gaps as you move. A minute after recording stops, a complete and amazingly accurate 3D model can be saved and shared.

Figure 1: Polycam -- 3D Scan Objects and Spaces, Rather Than Living Creatures and People, But Its Triangular Meshes Reflect Everything.

The end results of this combination of computational and imaging technologies are what today are known as “digital twins” — 3D models of real spaces and objects that can be explored from any angle, and are expected to spread everywhere over the next 5-10 years. These true 3D captures contrast profoundly with the work of Lytro, which spent the past decade trying to convince people that the future of photography was in refocusable still images, but never gained traction with businesses or consumers. Instead, phones are now creating photorealistic scans of entire rooms that can be explored from any angle. The possibilities for truly 3D photography include:

When Qualcomm announced the Snapdragon 865 last year, one of the most eye-catching selling points was support for big camera sensors — 100 and 200 megapixels, compared with the 12 megapixels commonly found on iPhone cameras. Qualcomm and its partners predicted a rise in super-zoom level detail, such that a phone camera would capture the same amount of detail with 1X zoom as a larger standalone camera might gather with a 10x or 20x zoom lens. Xiaomi and Samsung subsequently shipped 108-megapixel camera phones, but the 200-megapixel sensor hasn’t yet made its way into a device. These high-resolution sensors are enabling smartphone cameras to compete with the most expensive DSLR standalone cameras on pixel quantity. But improving pixel quality matters, too, and that’s the direction Apple took this year. The iPhone 12 Pro Max features the physically largest camera system yet in an iPhone, not because there are more pixels being captured, but because larger pixels enable the same-sized image to be more true to life than before. Instead of increasing the camera’s resolution from 12 megapixels, Apple increased each pixel’s size to 1.7 microns, compared with the 0.8-micron size of Samsung’s 108-megapixel sensor. In other words, four Samsung pixels can fit in the same square space occupied by one of Apple’s — a difference that lets Samsung increase detail, while Apple works to improve light sensitivity and color accuracy.

In Apple’s flagship iPhone 12 Pro Max, 2D images look even cleaner than they did before — virtually indistinguishable from DSLR quality under common lighting conditions and with noticeably less noise and grain than rival solutions (or older iPhones) in low light. During my testing, I was impressed by the increasing ratio of usable, clean photos to blurry ones, which was the ultimate result of combining bigger lenses, better light gathering, and automatic AI-assisted selection of the best image snapped during the split-second exposure process.

Even the smaller iPhone 12 Pro, which doesn’t include the big camera system, benefits from a number of improvements, particularly on the software side. Apple has introduced Smart HDR 3, which uses machine learning and image segmentation to determine proper exposures for separate parts of an image, such as skies and landscapes, across multiple instantly shot but different exposures of the same image. It also uses Deep Fusion to composite the sharpest details from those exposures into the final photograph. Very little of this is possible on traditional cameras, and some professional photographers might argue that the physics-defying “mad science” of computational photography is cheating, particularly as it becomes leagues smarter and faster than the humans whose photographs trained it. Google, Qualcomm, and Apple seem to be wholly unconcerned, as their products produce continue to improve in perceptible quality every year while conventional cameras remain largely stuck where they were five years ago. Apple is even catering to professionals now with a new image format called ProRAW, enabling granular tweaking of augmented RAW images shot by iPhone 12 Pro and Pro Max cameras, including the ability to turn off or adjust AI-based adjustments.
The end result is clear: Whether you choose an Android phone or iPhone, the need for huge standalone cameras is evaporating. And the concept of conventional 2D photography, where a photographer tries to make the most of whatever the camera’s shutter happens to expose during a single click, is rapidly becoming obsolete.

4K video, now with Dolby Vision HDR
When Qualcomm showed off the Snapdragon 865 last year, it claimed the processor was the first to live-capture Dolby Vision 4K HDR footage — video with professional cinema-quality color, brightness, and shadow detail. But as is Qualcomm’s burden as a chip supplier, truly being “first” required a partner company to manufacture a smartphone with Snapdragon 865, the right camera, and the right software. That hasn’t yet happened yet. Apple was first to commercialize Dolby Vision-recording camera phones using a completely different chip: A14 Bionic. In October, Apple proclaimed that the iPhone 12 Pro and Pro Max were the “first camera[s] ever to record in Dolby Vision,” capable of not only 10-bit HDR recording, but also live editing and simple streaming to Apple TV 4K devices and smart TVs with AirPlay 2 support. Creating Dolby Vision previously was a post-production process that required standalone computers, but the A14 Bionics’ speed enables it to happen as the video is being filmed, at up to 60 frames per second.

Videos created with Dolby Vision are color-accurate on iPhone screens, but don’t seem to look quite right when uploaded to third-party video services or displayed on some television sets, as the required Dolby Vision software version is newer than what’s included with most HDTVs. Trying to share videos on Instagram, for instance, will result in colors that look either faded or blotchy, rather than as saturated or richly detailed as intended. Until that gets sorted out, some — perhaps even most — iPhone 12 users may prefer to record without Dolby Vision HDR.
Granted, the average person might not need or even care about creating home movies that look as good as Hollywood blockbusters. Under some circumstances, the differences won’t be noticeable. But in situations where there are extreme variations between light and dark within a single frame — bright highlights, dark shadows — or tons of colors that might otherwise be rendered as blotchy, with inaccurate, unrealistic details — HDR cameras will offer superior nuance and raise the floor for smartphone videography. The fact that they’re already doing it at high resolutions and frame rates bodes well for future smartphones, as well as support across multiple televisions.

AI as a quiet enabler, and resulting camera accessory evolution
It’s hard to overstate AI’s impact on photography. Many of the innovations above are being made possible by neural cores in smartphone chips, powered by machine learning that enables the cameras to aggressively recognize (or “segment”) elements in photos, videos, and 3D scans so that the end user output looks optimal. Even common accessories such as selfie sticks are gaining AI powers: Zhiyun’s Smooth XS gimbal uses a combination of motors and AI software to automatically change the position of a smartphone’s video or photo camera based on the movement of tracked subjects, going beyond the capabilities of DJI’s similar Osmo Mobile 3 at a much lower price. 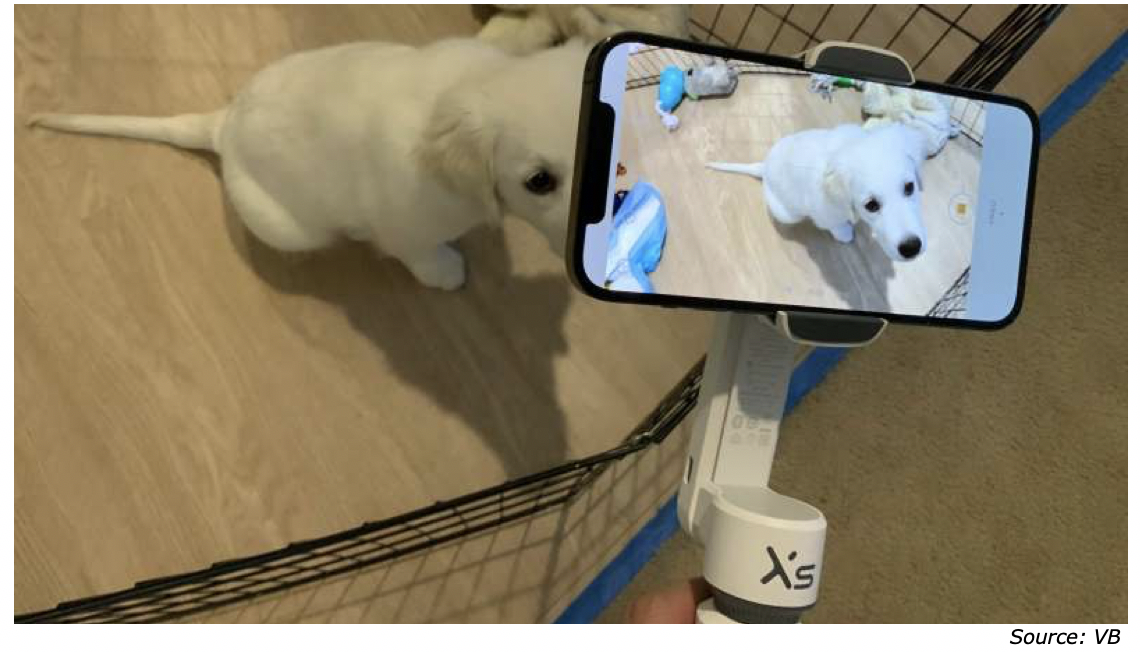 ​On the other hand, conventional photography accessories — such as Moment’s series of excellent add-on lenses and their supporting software — are still in the process of being rejiggered to accommodate the latest changes to Apple’s devices. The substantial-feeling metal and glass lenses now have to contend with the iPhone 12 Pro’s and Max’s newly separate camera systems, which required the company to produce both new cases, shown below, and “drop in” lens mounts that are still in production. They’re expected to be released in December.

Apple’s decision to use a Lidar-based autofocus system for the new iPhones — a feature that is designed to help a conventional camera focus more quickly and accurately by augmenting its pixel-based perceptive abilities with depth understanding — could also present challenges for add-on lens makers. Obstructing the Lidar scanner with a lens could stop the autofocus from working properly, requiring Moment’s software to disable Lidar and use an alternative means of focusing.