Vertical Divider
​TCL’s smartphone shipments peaked in 2015 at 45m. but is expected to drop to 15m in 2019. In 2019, Huawei, Xiaomi, OPPO and vivo sales will swell to average 150 m per OEM or 10x TCL sales. Their starts with a mid-range T1 device, which will purportedly see three other revisions - including 5G models - before the company's foldable phone launches in summer 2020. TCLs approach to adopt the approach of the big 4: Start cheap and then get more and more expensive and more technologically advanced as, it hopes, the audience grows with it.
Figure 2: TCL Smartphone Roadmap 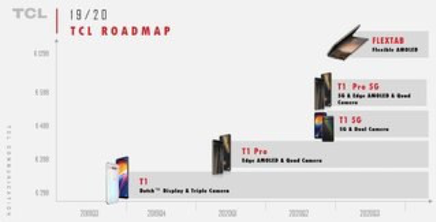 Source: Company
​The spec sheet of the T1 looks decent for a sub €300 device. It's a big, fully featured mid-ranger boasting a 6.53-inch full HD+ display with a hole-punch cutout for the front camera. It also has the Snapdragon 675 processor inside, along with 6GB RAM and 128GB storage. The cameras on the back include a primary 48-megapixel sensor, similar to many other current phones, with a secondary ultra-wide 16-megapixel camera. As for that third lens, that seems to be just a low-resolution camera for depth information. It runs Android Pie (with a Q update coming via OTA), and features a 3,820mAh battery that can charge quickly via an 18W charger.

TCL has had recent success with low end TVs and appears in most of the big box stores in the U.S, and Europe. The big negative is the slowing of the smartphone market and the increased competition at the low end with new entrants like readme and Xiaomi’s Redmi getting a strong foot hold.