TCL seems to be the winner in the sale of CEC Panda’s LCD assets, and is doing due diligence on Samsung’s Suzhou, China Gen 8.5 LCD fab, which Samsung, will close by the end of this year.  The Suzhou fab has an existing contract with the local government (30% ownership) that obligates it to run the fab until the end of 2022, which means Samsung (60% ownership) would either have to continue producing at the fab, likely at reduced levels, or transfer ownership, with the latter being the better solution.  TCL already has a 10% stake in the fab through a ChinaStar entity and would likely strike a deal with Samsung that dedicated panel supply to its possibly former owner. TCL could wind up with both Panda and Samsung LCD assets, pitting it against BOE. Samsung will then become a buyer of large size LCD panels, a direction it has been heading toward for over a year. Innolux, AU Optronics and Sharp will have to contend with Chinese competition and will continue to work toward reducing their focus on generic TV panel product that will compete directly with Chinese panel producers. 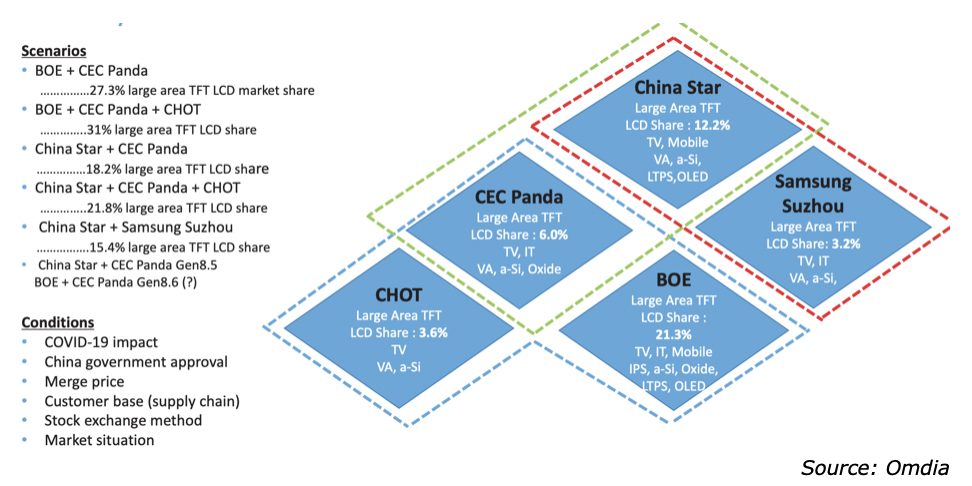 ​TCL is establishing itself as a formidable player in the LCD space, and while panel producers try to stake out claims on various display segments and push to develop new ones, the Chinese will have fulfilled their goal of becoming the ruling entity in the LCD displays space.  Over the next year this will likely be an enviable position and panel pricing will no longer be influenced by South Korean panel producers, other than from the demand side.  As we expect developing new display technologies will take time, TCL’s strategy, if fulfilled, will prove correct for the next few years, but only if Chinese panel producers act rationally toward panel pricing.  If panel pricing continues to increase over the next few quarters, there is a good chance it will choke off TV set production as margins are squeezed at the set level.  If Chinese panel producers (and their respective government representatives) decide that share is still important, competition between Mainland suppliers could lower panel prices and prove the TCL plan less effective.  If we ask Samsung or LG, other than getting the party line, we expect they will suggest the latter, or worse, propose that LCD technology will be gone in a few years.  In any case, the one thing we can count on is that nothing in the CE space is set in stone and while change can confuse issues, it is usually a positive.