The Duo is out and reviewers like the feel and shape and its ability to stand up at multiple angles, not available with traditional smartphones. The bonus screen comes in handy as an extra help at times; scanning something like Twitter or Slack, but multitasking with keyboard input is bizarre. If the dual screen stuff gets frustrating, it can be folded over and used as a single-screen phone, but then why pay for a dual screen.  The Duo arrives alongside the highly lauded Samsung Galaxy Z Fold 2, that's thicker, more expensive but has nearly seamless folding display (rather than two hinged displays), multiple cameras, 5G, a better processor, and more RAM. The Surface Duo by comparison, at best, needs another year to flesh out the form factor and software. Microsoft is striving for something that just hasn't come together on this first Duo. All the negatives puts pressure on Panos Panay, Microsoft’s chief product officer, who described the Duo as his “baby”.  He must remedy the shortcomings. The faster processor, increased memory, better cameras should be no brainers, but not having the smartphone software knowledge base is obvious with the Duo and may take a while to cure. 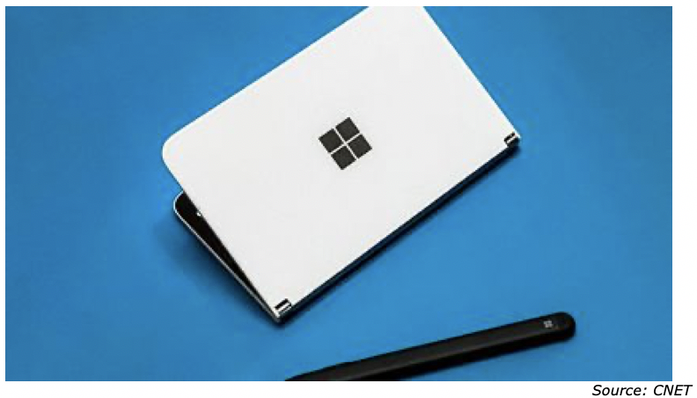 The Microsoft Surface Duo has a beautiful thin design, sharp OLED displays, a sturdy hinge that can bend and stay in any orientation and supports the Microsoft Pen.  But offsetting these strengths is slow, buggy software, few apps supporting cross-screen multitasking, poor full-screen movie watching, Just one sub performing camera, and no 5G

As we reported previously, the Duo is all glass, metal, a wonderful smooth hinge.
The displays are 5.6-inch, 1,800x1,350-pixel AMOLED, crisp and well-matched. Together they're 8.1 inches diagonally, like an iPad Mini ($285). There's a bumper in the box. It's strips of rubber and helps from sliding around.  The device needs tools; that unique software, that makes swipes and gestures easy to use.
The software on the Duo even after the normal fixes exhibits a persistent lagginess and problems with screen orientation that's throwing off the whole experience. For some very straight forward functions, such as opening an app or throwing one app to another screen, or closing it up again and make it single-screen, the Duo can't keep up with the user. Given that Microsoft is not well versed in smartphones, it’s not surprising that they failed in trying to seem like an everyday phone times two, and ended up ducking some of the bigger interface questions. 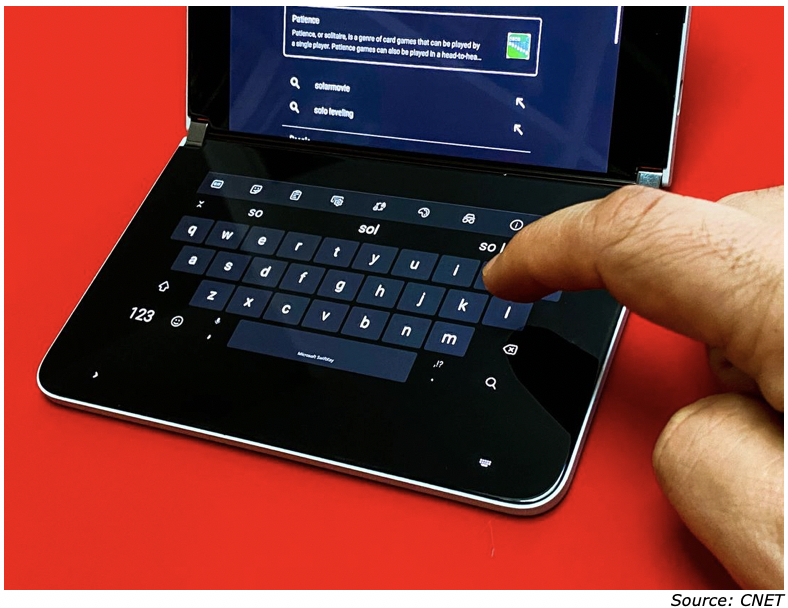 The soft keyboard is not great and not very practical

Two different screens suggest finding ways of making apps work together, and there aren't many that play nicely like this. Microsoft's suite of apps attempt to solve this need but some need a Microsoft 365 subscription to unlock all the features.
The laggy feel the early software, plus the weird interface, make navigation a serious challenge. Slack and Gmail work together fine... until the keyboard pops up in one window while trying to either thumb-swipe or flip the phone and type. Zoom works, and Zoom plus a browser or window to read things in is OK. But again, any attempt to type makes the keyboard fly up and either take over one app completely or interrupt the flow. The keyboard is typically the main way of being productive: writing and taking notes and it’s weird on the Surface. A quick-launch dock of six apps on the bottom of the screen is meant to help, but if more than six apps at the ready is needed, it becomes awkward and finding others in Android's app drawers isn't as convenient. 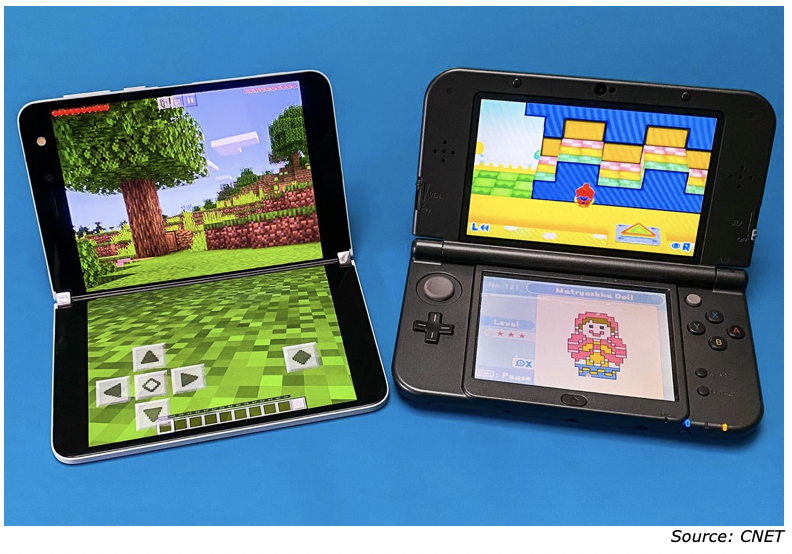 The Surface Duo can play games across both screens, like Minescraft, but they're not optimized and don’t work smoothly. The Surface Duo lacks system-selling apps. Microsoft's core apps are buggy and weird on the Duo, and too limiting. Text can be dragged across apps, but not images. Notes can be written with a Surface Pen that magnetically snaps onto the side of the Surface Duo (but isn't included). It doesn't feel like a universal annotation tool on Android. Apps don't always resize automatically. The shift from single to dual screen is a struggle and not a smooth functioning tool. 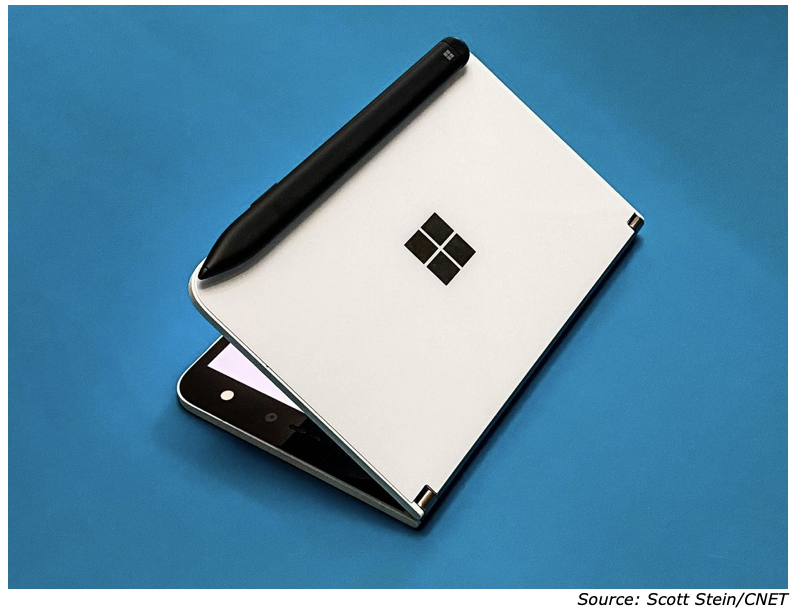 Video viewing on the Duo means accepting a big bar in the middle, or large bezels on each half of the glass. That's one area where a single folding screen has a big advantage. The camera app and camera on the Surface Duo are really frustrating and slow, too. 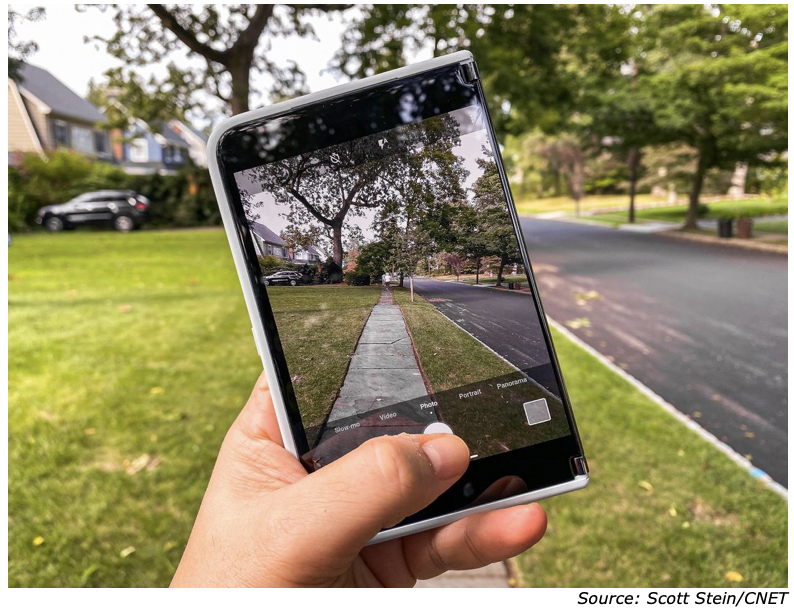 Video viewing on the Duo means accepting a big bar in the middle, or large bezels on each half of the glass. That's one area where a single folding screen has a big advantage. The camera app and camera on the Surface Duo are really frustrating and slow, too.

Most new phones have amazing cameras, optimized apps for nearly everything and they can zip between tasks at speeds we take for granted, but the Surface Duo doesn’t work at the same speed, I'd love it. Google hasn't made Android truly dual-screen optimized yet and Microsoft is still figuring out how it wants to tackle dual-screen for its ecosystem. Image stabilization for video seems particularly jittery. Also, the corner-oriented camera, while trying to serve all Duo positions, is too off-center for comfortable. Zooming while it's propped up, always seem the viewer is staring off to the side. The Duo could use more RAM and a faster processor. A Qualcomm Snapdragon 855 and 6GB of RAM seems underpowered for dual high-res displays, and it shows and the futurizing of 5G is missing. 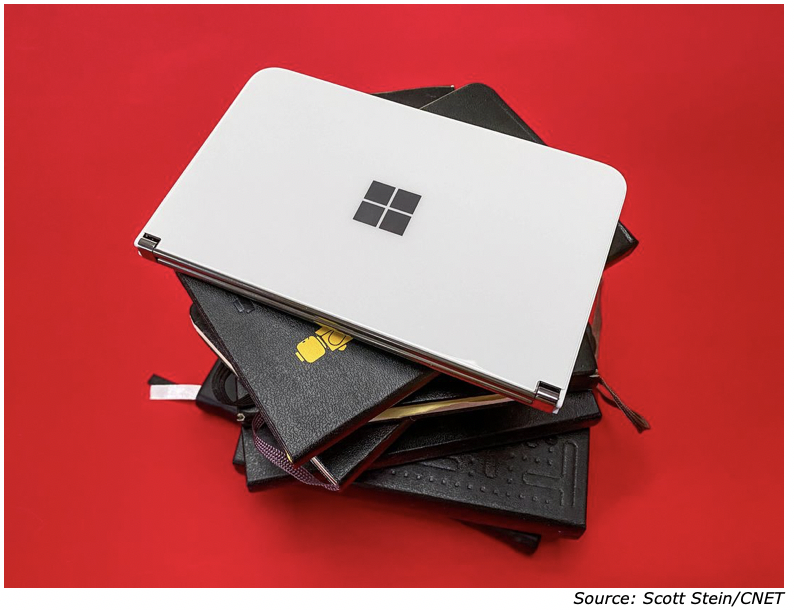 Phones are already overpowered-everything machines that have outstripped their size. But rebuilding the phone isn't easy. There is  some logic to the book-tablet design as the form and shape make sense, but the speed and implementation and features don't. Google hasn't solved the multi-display or single large display functions for Android. Microsoft's needs to take another shot at figuring it out on the Windows-based Surface Neo next year. The idea isn't going away, and just like the first big wave of smartphones, there will be plenty more experiments. 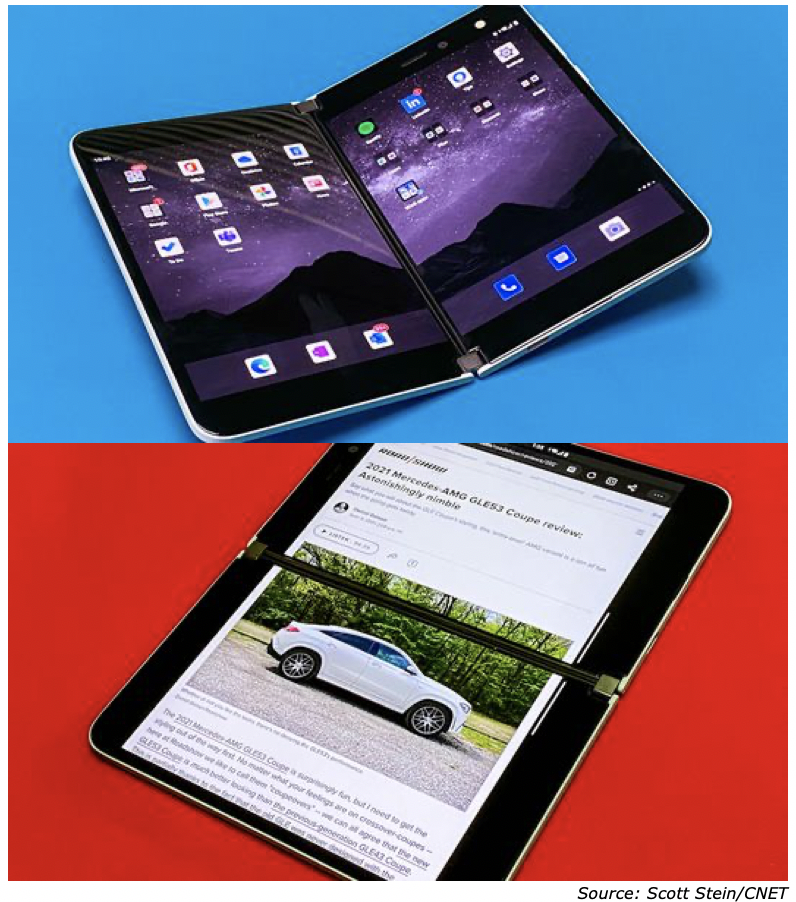 ​Samsung Z Fold 2's bendable design has made a good start on the software with drag and drop between Gmail, Chrome, Microsoft Outlook and Samsung native apps. Other apps, like YouTube video, play nice with the configuration.  The Galaxy Fold is a blueprint, meant for tech advocates living on the edge, while Samsung and the rest of the industry works out the details. The $2,000 price is for 4 cameras, 256GB, the Snapdragon 865 Plus, 120 Hz displays and is 0.54” thick when folded. Duo is priced at $1,400 with 128GB, and another at $1,500 with 256GB. It is 0.4” thick when folded, has one camera, the Snapdragon 865 and 60Hz displays